When cyclists get hurt or killed, Mayor Bloomberg’s NYPD blames the victims – and turns its attention to crazy definitions of “parade”. 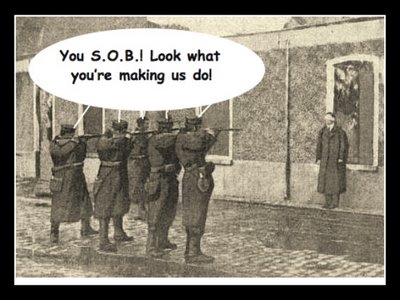 One evening last June, a New York City physician named Carl Nacht and his wife went out for a bicycle ride. Cautious about braving traffic, they chose a path along the Hudson River Greenway, a strip of asphalt reserved for bicycle riding, skating and people moving about on foot.

Suddenly a police tow truck from an adjacent highway turned onto the path, colliding with Dr. Nacht. His wife told a reporter from the New York Times that the truck did not yield to him, as required by law. Nacht died of his injuries. (Some of the details here):
http://www.gothamist.com/archives/2006/06/27/west_side_bicyc_1.php

The Nacht case was one of six collisions between motor vehicles and bicycles that were listed in a written statement submitted to a hearing panel by Richard Rosenthal, a seasoned New York City writer who specializes in cycling sports and bicycle industry-related matters. The panel was meeting to consider new regulations concerning how pedestrians and cyclists could be arrested for “parading.” Rosenthal’s statement was deliciously redolent of sarcasm and irony. He wrote:

“The history of the police department's proposed amendment …of the Rules of the City of New York—a parade consists of two people!—betrays the real reason for it and belies any claim it is simply to better control and enforce obstruction of traffic and going through red lights ...The department shows itself to be blatantly and transparently hypocritical in floating the canard that the purpose for this is anything other than to create a nuisance and to harass, intimidate, and impede a section of the New York cycling community.”

Rosenthal’s statement enumerated some of the ways Michael Bloomberg’s cops (and Rudy Giuliani’s cops before Bloomberg) routinely failed to seek punishment for drivers who kill bicyclists when they’re pedaling along alone or nearly alone, even as the police attempt to punish bicyclists who have the nerve to ride together in groups.

Of the Nacht death – a case of negligent homicide the way I see it – Rosenthal wrote with considerable cynicism, citing newspaper headlines and the traffic rule a driver had violated:

“A New York Times story about the incident was headlined, ‘Bicyclist Hurt in Collision With Tow Truck’. The article spoke of his injuries (Dr. Nacht died a day later) ‘when he collided with a Police Department tow truck, the police said yesterday.’ The driver was not ticketed [despite] The New York State Traffic & Vehicle Law, §1143: The driver of a vehicle about to...cross a roadway...shall yield the right of way to all vehicles approaching on the roadway to be crossed.

THE FULL CHAMBER OF HORRORS

It’s worth reading Rosenthal’s full litany of violent bicycle “accidents” and violated rules that went unpunished, because police under the last two Republican mayor administrations have done nothing more than shrug at them.

Remember, this is the same police department that pumps 50 bullets into a van full of unarmed people, but then spends its time worrying about bicyclists and pedestrians who have the temerity to walk or ride together in groups.

SPEED AND KILL A DISTINGUISHED SCIENTIST?
NOT A PROBLEM TO NEW YORK COPS.

• “July 12, 1997, Dr. Rachel Fruchter, 57, a graduate of Oxford and Rockefeller Univ. Ph.D., a biochemist, a professor of obstetrics, and a researcher into gynecological cancer and the epidemiology of cancer, was cycling in Prospect Park in Brooklyn when she was struck from behind and killed by a van driver driving well over the speed limit, as police reconstructed the scene. He was not permitted to be on the park road as he was. He was ticketed, but not for that. He was ticketed only for equipment failure.”

• “A few years ago, a cyclist was riding south on South Street. A limousine driver was driving north. The limousine driver made a left hand turn into the cyclist killing him. The driver was not ticketed. The police could not bestir themselves to cite him for violating the New York State Vehicle & Traffic law, § 1141: The driver of a vehicle intending to turn to the left...shall yield the right of way to any vehicle...so close as to constitute an immediate hazard. “

• “April 30, 2005, Jerome Allen, a 58 year old New York State senior bank examiner, and very experienced cyclist, was on a solo, evening ride in Staten Island. If the reported story told by the 23 year old driver who killed him, Anthony Tasso, Jr., is to be believed, Allen would seem to have been riding his bike as fast as Lance Armstrong. That, or it would seem Anthony was content to drive his uncle's, Joseph Tasso's, Lexus SUV (with an out-of-state license plate) on an otherwise empty, well-paved, six-lane road… [at]. 18 MPH, which more than strains credulity. In either case, according to a report, young Tasso claimed Allen saw fit to suddenly swerve in front of him as they were riding side-by-side. That doesn't pass the laugh test. Tasso, who was driving on a suspended license that he neglected to have re-instated, was not even ticketed. The failure of the police to conduct a serious investigation has seriously hindered and prejudiced claims arising from this.

STRUCK FROM BEHIND?
MAYBE HIS BUTT WAS TOO BIG.

• “September 24, 2005, 14 year old Andre Anderson was cycling near his home in Far Rockaway, Queens when he was hit from behind by another 23 year old, Jose Vicens, driving another luxury SUV, this one a Lincoln Navigator. (See: http://rightofway.org/) Vicens was not ticketed. The police could not bestir themselves to cite him for violating NY State Vehicle & Traffic Law §1122, which enjoins drivers from aggressive passing.”

• “June 20, 2006, a man was riding his bike on Tenth Ave. at 44th Street. A cab driver opened his door into him. He swerved to avoid hitting it-or after hitting it-and had his leg crushed by a bus. The cab driver was not ticketed. The police could not bestir themselves to enforce the New York State Traffic and Vehicle Law, §1214: No person shall open the door of a motor vehicle on the side available to moving traffic unless and until it is reasonably safe to do so, and can be done without interfering with the movement of other traffic.”

WHY ALL THIS MATTERS
OUTSIDE OF NEW YORK CITY

I hope America is watching as closely as some of us New Yorkers are watching. Both Michael Bloomberg and Rudolph Giuliani’s names have been mentioned in connection with the next Republican nomination for President. They’ve spent considerable effort polishing their images – but neither politician, when you get into it, seems to give a hang about their constituents’ lives and limbs.

Instead, the current Mayor Bloombereg makes inroads into normal citizens’ civil rights under the First Amendment under the name of “traffic control” – except he has no interest in controlling traffic that kills people.

And the former mayor? Well speaking of the First Amendment, Giuliani once threatened to cut off city funding to a Brooklyn museum because he didn’t approve of one of the pictures hanging in it.

Back in Brooklyn – which happens to be where I grew up – they had a word for this:

Bicycles are to pedestrians what cars are to bicycles. I hates both cars and bikes, bein' as I do not drive nor ride.