Utah Senator Mike Lee’s heroic plan to destroy humanity, the epidemic of Republican logorrhea, and how we know that at least 20 percent of Georgia’s Trump voters are going to spend eternity in hell.

Quick, who talks too much, blurts out whatever’s on his mind, and spouts crackpot ideas sometimes worthy of a world-class lunatic, the rest of the time worthy of a confirmed nincompoop?

If you said, “Donald Trump,” well, of course.

Well, if the headline and photograph made you think it must be Republican Senator Mike Lee of Utah, you’re certainly right, of course.

Probably every Republican on the planet, that’s who.

The Republics are coming down
with virulent logorrhea again

There seems to be an outbreak, no, an epidemic of mindless Republican logorrhea. More and more Republicans, from Donald Trump, to Mike Lee, to some obscure Georgia preacher who seems to think he has his own personal direct line to the Almighty are are spewing it. They’re seizing microphones and delivering rambling addresses full of crackpot notions and self-satisfied conceits.

Let’s deal with Mike Lee first. In what appears, from a video, to be an address to a considerably-less-than-packed Senate chamber, Lee recently delivered a smirking oration punctuated by what appeared to be illustrations swiped from some George Lucas storyboard that accidentally got left  behind in a Hollywood conference room.

While rambling on in a thirteen minutes-long monologue that clearly demonstrated he has no future as a standup comedian, Lee said:

And then, a few seconds later he added:

“You know where the solution can be found, Mr. President? In churches, in wedding chapels, in maternity awards across the country and around the world. Mr. President, this is the real solution to climate change. Babies. Climate change is an engineer problem. Not social engineering, but the real kind. It’s a challenge of creativity, ingenuity and most of all technological innovation. And problems of human imagination are not solved by more laws. They’re solved by more humans. More people mean bigger markets for more innovation.”

Into the deep
hole we go

Uh Mike? The Green New Deal is an innovation. But more and more babies, and more babies after that, will just put further pressure on resources, consume more energy, result in further acceleration of climate change, and dig us deeper into a hole.

Now, I admit that nature has a way of compensating for excesses. An example? A forest fire will burn most of the trees. But it will also clear spaces for new trees to catch the sun and grow.

Similarly, on a planet overcrowded with imbeciles who are destroying the place, the planet will let the imbeciles have at it for a while. Sooner or later, some of those imbeciles will unleash a nuclear war. Or they’ll raise such havoc with the climate that there will be earthwide annihilations by means of famines, floods, and droughts, causing the deaths of millions, or perhaps billions, and forcing others to kill huge swaths of invading hordes — maybe with nuclear war again — to get humanity down to manageable levels.

After all, if humanity were an endangered species, with perhaps only 500 living examples, then even if they all drove gas-guzzling SUVs with no pollution controls, the consequence would be something that nature could handle. It’s only when the earth’s 7.54 billion people are burning carbon and mowing down forests all at once that we become a problem.

Give Mike Lee
a vasectomy

So it sounds to me as if at least a tiny part of the problem could be solved if we forced Mike Lee to have a vasectomy before he adds to the problem again. Speaking of which, what’s with the blonde in the lower left-hand corner of the video, who seems to be laughing at all of Lee’s lame jokes?

I have no idea who she is, or why she’s there, or why nobody else seems to be there. But should it ever turn out that she’s having an affair with Mike, I wouldn’t be completely flabbergasted.

Speaking of undesirable gene pools getting perpetrated, a member of the Georgia State House of Representatives, one Trey Kelley, recently stood by while his father, Pastor Doyle Kelley, was the House’s pastor-for-a-day. It was more than just a demonstration that idiocy may be a hereditary trait.

The event also demonstrated, yet another time, that you can’t fix idiocy by handing the idiots a microphone. Toward the end of a lengthy invocation that seems to have violated the shaky line between church and state, Pastor Kelley declared:

The command is there: Do all in the name of Jesus Christ. People always ask me, ‘Why are there so many lost people in the state of Georgia?’

“Now you want to hear it in Baptist terms: Seven million people that are lost are dying and on their way to Hell. That’s what that means.”

Well, Pastor, let’s do a little bit of arithmetic here. During the last Presidential election, only 49.6 percent of the voters cast their ballot for Hillary, Gary Johnson, or some obscure candidate. That’s a total of 2, 025,341 voters. Assuming every one of those voters is going to hell, that’s still far short of the 70 percent of Georgians who are hell-bound. And you know what that means?

The Georgia delegation in hell

Right, at least 20 percent of the 2,089,104 Georgians who voted for Trump — very roughly 410,000 of them. are going to hell. Along with roughly four and a half million Georgians who voted for nobody.  (On the other hand, all those folks may simply be going nowhere, same as they’ve done for their entire lives, but that’s an argument for another day.)

Anyway,Trump-voting Georgians, I look forward to seeing you all in hell. And yes, you can remind me that Pastor Doyle Kelley told me you’d be there.

And here, if you can bear it, is the whole long, boring, discourse on hellfire and damnation in Georgia. Have a nice day.

Posted by The New York Crank at 5:52 PM 0 comments

"Bullshit receptivity" and the flat earthers — a metaphor for....? Well, you decide.

What is the following video a metaphor for?

People who believe 9/11 was an "inside job" — because roughly 36,000 gallons (over 107 tons) of jet fuel, delivered by a speeding jet plane that crashed through a wall and then exploded in a building all at once couldn't possibly burn hot enough to melt the steel girders supporting a World Trade Center tower and bring the building down?

Donald Trump has done nothing wrong?

We are being invaded by Mexicans?

Posted by The New York Crank at 9:50 PM 2 comments 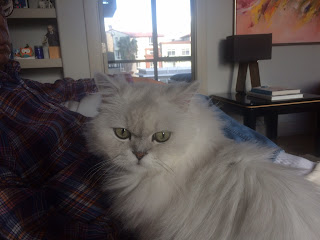 Cows, Gas, and Trump — a nearly free-associative ramble. Or amble. Or emotional purge. Or something.

Irritability has been my default position for more decades than most of you who are reading this have lived, kiddies. All the same, I must say that I’m feeling more irked than usual these days.

My teeth are gnashing. My head is about to explode. I’m ready to throw a chair through a window — preferably somebody else’s window.

A case in point has been prompted by just one stinking issue of the New York Times — today’s issue. I'm talking about hamburgers.

I mean, trust defensive Republican strategists to take a more-or-less mild suggestion and blow it into a near-nuclear meltdown. In the past few days the hysterical right, from the Trumpster to Sebastian Gorka, have been raging that Democrats want to take away….No, not your guns. Not your so-called religious freedom to insult and exclude from public accommodation anybody you personally don’t like. Not even your God-given right to enjoy the next fatal and fiery NASCAR collision.

The Republicans are ramping up the hysterical notion that Democrats want to take away your hamburgers.

What sparked all this is a goal, propounded by Democratic Representative Alexandria Occasio-Cortez, and Democratic Senator Edward Markey, calling for “working collaboratively with farmers and ranchers in the United States to remove pollution and greenhouse gas omissions from the agricultural sector as much as is technologically feasible.”

Get that? "working collaboratively"  “as much as” “technologically” “feasible.” Hardly a demand to call out the dreaded, armed, and infamously murderous Hamburger Swat Squad.

I keep looking for buzzwords like “confiscate” and “hamburgers” in the OAC-Markey manifesto. Or even for a mention of sirloin, T-bones, filet mignons, flap steaks, well-marbled chunks of stewable chuck, or grandma’s pot roast. I find nada. Not even the forced purchase of Hamburger Helper.

What AOC and Markey are really  talking about, it would appear, is better agricultural management, and by implication, the problem of farting cows. It seems that cows emit a fairly significant dose of the greenhouse gas methane into the atmosphere every time they fart or belch.

I’ll hazard a speculation that one possible solution might be to trap a good portion of those gasses and convert them into fuel which we could use in lieu of fracked “natural gas” to heat our homes and cook our, uh, hamburgers.

Overlooked in this brouhaha is the fact that we humans also emit our fair share of methane by farting and belching, and there are a hell of a lot more of us than there are cows.

Population reduction might make a considerable contribution to a less overheated planet, not only by eventually eliminating billions of daily farts and belches, but also because the fewer people we'll have, the less fuel we'll need, and the few farting cows to feed us.  Moreover, we’d better do something about population before Mother Nature does it for us. As somebody — I forget who — once remarked, “Nature is a hanging judge.”

But how can we begin?

I modestly propose that we start to ameliorate this situation by converting the biggest gas bags in government into hamburger, thus, uh, killing two birds with one stone.

“Trumpburgers,” assuming they were the actual thing, might be the first product  in America with the Trump name on it that is both honest  and socially useful. Ditto all the other Republican gas bags (and a few iffy Democrats whose names I shall not mention here to avoid a digression into intramural outrage.)

This could turn into a game — not that I’m suggesting we have to play it — in which we nominate various Republicans, neo-Fascists, and other ethics-free legislators to be converted into various dishes, for the sake of diminishing gas emissions in the halls of Congress.

Oh what the hell, as long as I’m on the subject, I might suggest that Mitch McConnell could be converted into Mock Turtle Soup.

Cross-posted at No More Mister Nice Blog
Posted by The New York Crank at 2:46 PM 0 comments