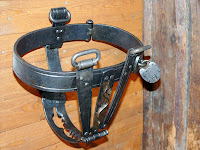 Washington, D.C.: The American Association of Chastity Belt Manufacturers today endorsed former U.S. Senator Rick Santorum in his campaign to become Republican nominee for the Presidency of the United States.
“After long and hard consideration, America’s chastity belt manufacturers have determined that Rick Santorum would best promote the ideals of chastity and submission that are the bedrock of traditional morality and of our business,” said Duane LaPoubel, chairman of the multi-member K Street association.
“In this noble spirit,” LaPoubel declared, “we have formed a Superpac called Americans for Life and Chastity.” The pro-life chastity super-pac is expected to contribute $190 million to the Santorum campaign, drowning out Mitt Romney and other candidates in the remaining   primaries, and overwhelming President Obama in the national elections.
LaPoubel noted that “the chastity belt is the most effective means of contraception known to humanity. It is far more powerful than the disgusting and life-destroying pill, as well as other mechanical or latex devices. It is even more powerful than abstinence. An abstinent person has to abstain. With a chastity belt, it doesn’t matter what a person tries to do. Or for that matter, what two people try to do. Unchaste activities are securely kept under lock and key.”
The chastity belt manufacturers for years have been attempting to promote their devices for purposes not only of contraception, but also for “encouraging young people to wait until marriage,” and for the prevention of rape.
In recent years they had become discouraged until Santorum announced his candidacy. The manufacturers believe Santorum is the candidate most likely to institute government programs mandating the use of chastity belts on women until they are wed, and in some cases well after marriage if their husbands choose.
The chastity belt manufacturers, for their part, have been refining their products to utilize modern technologies. For example, one chastity belt, the I-belt®, can be locked and unlocked only with a smartphone app coded by the person who has attached the woman’s belt. Another contains a tracking device that lets fathers or husbands know exactly where their women are at any given moment.
“These innovative new products are part of our pro-life campaign,” said LaPoubel. “When you think about it for a moment, nothing is more pro-life than a chastity belt.”
Encouraged by the medieval revivalist atmosphere enveloping Santorum, a few of the chastity belt manufacturers have also begun developing branded new products. Among them are stainless steel witch-dunking stools and fireproof stakes, which can be re-used many times for burning heretics, according to the manufacturer.
"These are the finest new anti-witch devices in eight hundred years," said LaPoubel.
Posted by The New York Crank at 9:47 PM 2 comments 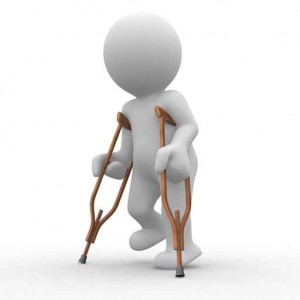 So okay, Johnson & Johnson’s DePuy division comes up with an artificial hip that supposedly is going to last longer and provide more durability than other artificial hips and help make walking look and feel more natural.
Let’s wildly assume that the product was brought to market in good faith. Nevertheless, by 2009, the DePuy hip is failing like a dimwitted six year in an advanced calculus class. People who’ve had the implant are in severe pain. They’re not only not walking better, they’re walking like people who’ve been crippled by their pain.
Surgeons who implanted the hips open their patients up again and find what the New York Times called “mysterious masses of dead tissue,” inside and around the thighs of some of these patients.
Worse, DePuy “received repeated warnings that the implant was failing and that surgeons were abandoning it.” And what  did DePuy do? For a painfully long time (pun intended) they kept stating despite the evidence that the hip implant was performing “on a par with competing devices.”
Even after the Food and Drug Administration forced J&J’s DePuy unit to take the product off the market, they kept peddling this crippling and evidently toxic implant in Europe, according to an article that popped up yesterday in the New York Times.
There’s more to the story than that, and I urge you, if you haven’t already clicked on the link, to go here and read the disgusting truth in detail.
But there’s more to the story that you won’t find in the New York Times. A few years ago, the Crank’s brother had poisonous DePuy hips inserted on both his left and right side. Last year, he needed to go through surgery to have one of the DePuy hips removed and replaced by a safer brand. The other hip hasn’t failed. Yet.
The Crank’s brother has a law degree and of course is suing J&J. But he is not sanguine about the outcome. He says that if he takes the case before a jury, he is not likely, at the age of 60-something, to live long enough to see the money because corporate law allows deep-pocketed companies to keep on...and keep on...and still keeping on appealing. The case could go on for a decade or more.
J&J knows this, so they're chiseling on settlement offers. The Crank’s brother tells me the company is offering paltry settlements in the area of $300,000 per hip, knowing that few of J&J’s victims want to go through the lengthy and onerous appeals process.
So who gets what from the settlement? According to The Crank's brother, the lawyer trying the case gets a third. The victim of Johnson &Johnson and DePuy gets a third. And the other third? Believe it or not, it goes to the health insurance company – in this case Medicare – which paid for the surgery and hospital stays, since they're victims of J&J and DePuy, too, if only financial victims.
That’s why the corrupt Republicans who want to eliminate medical malpractice law suits ought to be voted out of Congress. If they had their way, neither J&J’s victims or Medicare would get a dime back as a consequence of Johnson and Johnson's callous disregard for safety or human suffering. Both the taxpayers and the surgical victims would suffer.

Ditto for the evil or idiotic Congressmen who want to reduce regulations on businesses such as Johnson &Johnson. This case clearly demonstrates we need more regulation, not less.
As for the senior executives of DePuy and Johnson and Johnson, they ought to be sentenced to having both their hips forcibly replaced with the faulty DePuy hips, with no chance of removal.
Posted by The New York Crank at 11:48 AM 2 comments

Where are Americans taking their technology? And what does this mean for Presidential election ad campaigns? 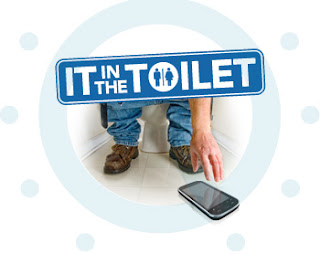 A true story first. Decades ago, when I was a young creative supervisor in an advertising agency, I interviewed an even younger guy looking for his first ad agency copywriting job. He showed me some speculative ads he had done. The ads themselves didn’t blow me away, but his initiative and wild imagination did.
One of the things he told me about was a business he had invented for himself. He tried to sell advertising space on the inside of public toilet stall doors.
“Look,” he said, “it’s a captive audience. Some people sit there for a long time and forget to bring in something to read. So I figured…”
It didn't matter what he figured. His wild thinking was too much for the stuffed shirts who made advertising decisions in those Mad Men days. But I hired the guy anyway. His name was Gary Kott. Before long he jumped ship from advertising for a career in movie and television writing. He ended up working on scripts for the Bill Cosby Show. He retired to the Nevada desert, I hear, still young (and richer than Croesus.)
Crazy-like-a-fox ex-adman
enjoys the last laugh
Suddenly, Kott’s crazy idea doesn’t seem so crazy. And while technology has brought us far beyond john doors, the phenomenon that Kott glommed onto in about 1971 still holds.
According to a survey conducted by 11mark, a marketing agency in Alexandria, VA:

The younger  they get, the more these people can’t drop their drawers without it. Says a press release about the report:

Presidential campaign opportunity!
Clearly, this discovery presents an opportunity for the Democrats – as well as for further vindication of youthful  Kott’s brilliant  inspiration. Moreover, given the level of gutter advertising Romney and Gingrich have been hurling at each other, advertising for Democrats in toilet stalls would, if anything, bring up the level of discourse.
Imagine if, in October, you sat down on a john, say at a theater, only to discover a sign on the inside of the door a framed placard that says, “What is Romney’s economic plan? Explanation in four words." And then there's a number to text.
And when the smartphone-equipped person does just that, he or she gets a return message that says, “Romney-nomics: You’re sitting right over it."
Another: "Where will Romney's economics take America?"
When you text this time, the return message says, "press the handle behind you to see where Romney will take the economy."
“Guess what we’ve flushed out?” another john door sign might say. “Go to…” (and here there would be a URL inserted) to learn the no-crap truth.”
The possibilities just keep coming. “Constipated? You’re not alone. Romney’s full of it.”
“If you’re squeezing hard now, wait until you see what Romney does to your lifestyle and if he becomes president.”
Or just a big picture of Romney’s face with the headline, “Got gas?”
I'm not alone in thinking this is the wave of the future. “The writing is on the stall,” says Nicole Burdette, principal of 11mark.”
This is no crap.
Addendum: Gary Kott took a look at this post and tells me my memory is faulty. He writes that he has not only abandoned Nevada for a patch of California but that, " If the NY Times picks up on your blog, please tell them that the stall idea was Ron Gold's -- he's a great guy and I'd hate to hurt his feelings..." (Gary says he was merely selling john door ad space for Ron.)


If I should be so lucky as to hear from the Times about my blog, I will refer them to the paragraph above.
Posted by The New York Crank at 11:26 AM 2 comments

Watch the best, most lucid and completely coherent policy speech Ron Paul ever made