So your Internet browsing history is up for sale? Maybe the legislators who made this happen will have theirs for sale, too. Here's the deal.

They'll fight to the death to keep Donald Trump's tax returns private. Not to mention the contacts of Donald Trump and the people around him with Russian spies against the U.S.

But when it comes to what you search for on the Internet? You, my friend, are fair game.

Congress has signed and sent to the President's desk SJ Resolution 34, which would allow your Internet Service Provider to sell your browsing history to anyone it chooses. And no point using Duckduckgo.com instead of Google. All your browsing goes through your ISP.

So your ISP will have everything, absolutely everything, on you. This makes you pretty vulnerable to blackmailers and nosey HR people deciding whether to hire (or retain) you.

But  Congress and the President are vulnerable, too. Maybe.

An activist named Adam McElhaney is telling us that what's good for the goose is good for corrupt Republicans. He is out there on Go Fund Me, seeking contributions to buy and make public Internet browsing data that would expose embarrassing Internet searches and visits by Republicans who voted for SJ Resolution 34. And to equally embarrass business people who will profit from it.

• Paul Ryan, Speaker of the House
• Marsha Blackburn, Republican member of the house and anti-privacy advocate
• Mitch McConnell, Republican Senate Majority Leader
• Ajit Pai, Donald Trump's appointee to Chairman of the FCC
• Brian Roberts, Chairman and CEO of Comcast, one of the companies that will be able to make a very fat buck selling your browsing history
• Randall Stephenson, CEO of ATT, another company that will be able to sell your searches and then wallow in profit.

McElhaney claims to have collected a war chest of well over $100,000 so far, but before you contribute too, a heads up.

As of this posting, Resolution 34 isn't law yet. Yet, that is. Moreover, it's not clear that, say, AT&T or Comcast will sell McElhaney (or anybody else) individual browsing histories, rather than fat packets of IP addresses and the browsing histories at those addresses.

And while I hate to refer you to a Silicon Valley online rag that caters to Internet profiteers, I feel I must, very unhappily, refer you to an article in TechCrunch declaring McElhaney is a scammer.

All the same, wouldn't it be cool if they were all hoist by their own petards? Maybe, just maybe, if some pro-privacy coders will take the trouble to write a search program, and if McElhaney manages to buy a packet of data, it could even be more than just possible.

But I still wouldn't count on any exposées. Should the public find the same way into Congressional private lives this new law is about to give business into yours, wanna bet what'll happen?

There'll be one law about your privacy and mine, and another hastily-written one about Congressional and Senatorial privacy. Just the way there's one medical plan for you, me and Joe Sixpack, and another super-deluxe, all-expenses-paid, medical plan-for-life for Congressmen and Senators.

To paraphrase the late Leona Helmeley, the Queen of Mean, and then filter her through the Republican mentality, laws are just for the little people.
Posted by The New York Crank at 4:55 PM 0 comments

The Trump Slump: let me be the first to congratulate the President this time.

Back at the end of January, when the Dow Jones Industrial Average  hit 20,000, Donald Trump stood up and took a bow. He was “very proud,” he said. And his cheering section wildly applauded him.

This was the “Trump Effect,” said Kelly Anne Conway.  Right. He alone could do it.

But a funny thing happened on the way to the celebratory fireworks. The Trump Boom became a Trump Slump. 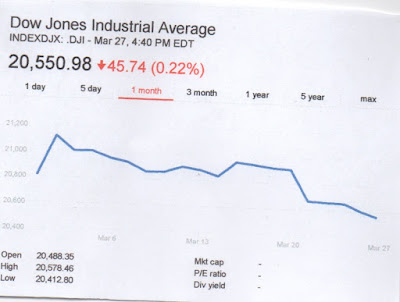 For the past three weeks, the Dow has been acting like an overinflated tire with a slow leak.

Nothing sudden mind you. But on most days, the stock market loses a few, or a few dozen points, and the wheel deflates a bit more. You can practically hear it hissing.

If this keeps up, it’ll be running on its rim pretty soon. Until the wheel comes off.

Hey Donald, what’s the matter? Did you stop taking credit for what happens in the stock market — or is it the economy? — or what?

P.S. It's now a day after I posted the stuff above, and the Dow, as of 3:27 in the afternoon, has posted a 163.8 points recovery. So no doubt The Donald will soon be boasting that he's just pulled the market out of a slump. Unless, of course, tomorrow, or the day after, or the day after that, it slumps again.

Posted by The New York Crank at 5:54 PM 0 comments

I have been poisoned by Donald Trump's Russian agents

I've been trying to post here for days and days. And days.  I have lots of good ideas. But every time I sit down at my computer, I lose the magic. My mind goes blank.

I'm sure it's one of those fancy Russian poisons — the kind Russian agents give whistle blowers who make Putin look bad. Or maybe it's the kind of stuff that sneaks up on you like a North Korean agent, armed with VX and intent on smearing it on your face in the Singapore airport, so you'll die.

So that's how I know. I know it just as assuredly as Donald Trump knows for an absolute fact that Barack Obama sneaked into Trump Tower at 3 a.m. and attached a tape recorder to his telephone and others to the whatever of Kellyanne Conway and  Katrina Pierson.

So I'm laying back for a while. I'll be back to you when the poisons wears off. Or when the brain waves lose their voltage  Meanwhile I would strongly advise that you keep dangerous brain invaders out of your own head just the way our president does it. Here are instructions:

Posted by The New York Crank at 4:37 PM 1 comments

I’ll tell you who I think Donald Trump is. I think he’s the kid who came to your birthday party, ripped open all your presents and smashed them, then ran up to your room and broke the rest of your toys.

He then dashed back downstairs, found your birthday cake, and threw it on your mom’s carpet, gooey icing side down.When your mom spoke harshly to him, he lay down on the floor and had a tantrum, kicking his legs and screaming loudly.

And when his parents came to pick him up, he whined that none of the other kids were nice to him and that your parents were being unfair to him and making him misbehave. Just before he got into his own dad’s car, he spat in the direction of your house and flipped you the bird.

Since arriving in the White House this still-mentally-six-year-old has done his best to smash all kinds of regulations including the regulations meant to reduce water and air pollution. He has issued an edict  that would break fuel economy standards, for no good reason at all. He has had temper tantrums galore. And he whines that the press is being mean to him.

That’s like cutting off your left thumb so it won’t seem so painful after you cut off your right thumb.

I don’t buy it. I think he’s a six year old with severe behavioral problems, and I think that if he can’t be institutionalized and injected full of tranquilizers, he should be taken out behind the woodshed to get his fanny whupped.

Posted by The New York Crank at 3:31 PM 0 comments