Happy Halloween from The Land of the Brain Dead. Here's another demonstration of that, jellohead! 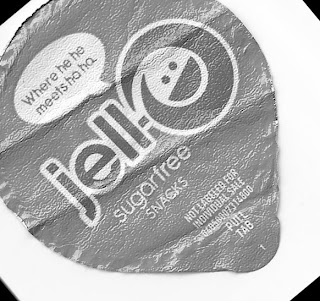 Nevermind that back during the last election, when asked what newspaper she reads, Sarah Palin couldn't name one.

Nevermind that the Republicans this year have seriously put a candidate on the ballot who never knew that the Constitution of the United States guarantees us freedom of religion and whose campaign slogan seems to be, "I am not a witch!"
Nevermind that while we have some of the lousiest healthcare in the Western world, with thousands of people uncovered, we think that a plan to assure that every American gets healthcare is some kind of "socialist plot."
Nevermind that we are willing to leave our infrastructure way, way underfunded in order to help the superrich save super sums on taxes that will soak the rest of it – and while we're at it, cut our own Social Security and Medicare benefits to help the rich out.
If you want a really, really good demonstration of how brain dead we are, check out the new slogan under the lids of individual jello® desserts. Yeah, the one that says, oh so informatively, "Where he he meet ho ho."
Once upon a time, jello advertising spoke intelligently to intelligent consumers. Their slogan, "There's always room for jello," let consumers know that this was a light dessert that wouldn't leave them feeling stuffed at the end of a heavy meal. No, this wasn't pointy-headed elitist snobbery, just something good to know. It sold jello like crazy.
Now the pitch to consumers seems to be, "We are part of your aimless and meaningless existence," and we have this "he he ho ho" idiocy.
"Jell-O is the latest brand to jump on the 'happy marketing' bandwagon where relentless optimism seems to be working with consumers in categories from food, to sodas, to office supplies," reports the advertising tradepaper Adweek.
Right-o then. Don't think. Don't worry, be a happy idiot. While America's economy and future go down the toilet and thugs for Rand Paul stomp on people who don't agree with their view of how things out to be, just tell yourself "he he ho ho." There, now you don't have to worry while America gets stolen from under you.
Posted by The New York Crank at 5:18 PM 1 comments

Why is the deficit so big? It could be because billion dollar companies are robbing the U.S. Treasury blind.

One of the reasons you and I and other ordinary American citizens are taxed so much and still live in a country with a huge Federal deficit is because multi-billion dollar American corporations are taxed so little.

They move money around — around Europe and the Caribbean — to make their tax liabilities disappear.
According to Bloomberg news, Google and other U.S. corporations are ripping off the taxpayer to the tune of $60 billion. Now Facebook is about to follow. And there are still others.
The Tea Party and Republican wingnut solution is to cut or eliminate Social Security and Medicare, Federal payments to the states, money for infrastructure and everything else that once made America work.
The smarter solution would be to cut the tax loopholes that let the big corporate thieves get away with this stuff. But Republicans in Congress won't let it happen. If you want to get mad as hell at something, get mad as hell at that.
P.S. An earlier version of this post contained an error attributing the whole $60 billion to Google. That has been corrected. Thank you to those who pointed it out. However, no thanks to those fearful (or furious) souls who declare that if the American people try to collect what they're owed by the corporations, the corporations will leave the country. That's like saying, "If we try to stop that band of bandits, they'll burn down our village and rape our women." I agree the corporations will try to leave the country, just as so many have moved their manufacturing plants out of the country and thrown Americans out of jobs so the factories can pay paupers' wages. So I'm glad you brought the matter iup. We can stop this.
We need to urge Congress to pass criminal laws that would fine companies the equivalent of the wages and taxes they escape by moving overseas. If they want to sell goods here, or do business here, they can employ Americans and pay American taxes here. You say they'll stop doing business in this huge market if we try. Fine. I can guarantee you that some entrepreneurial (and honest) Americans will rush in to fill the vacuum.
But...but...but the right-wingnuts will complain that if companies pay American wages and pay American taxes, prices in America would go up. I agree. That's the price we pay for full employment and a growing economy, rather than unemployment and a dying economy. Which would you rather: Have a job or pay an extra dime for a bag of carrots? (I can hardly wait for some genius to do the math and tell me it's not a dime, it's 17 cents.)
P.P.S. My policy is to allow any post that is not libelous or outrageously, formidably obscene. However, I do screen for those things, and I only do so once or twice a day. So if you don't find your post here for a while, be patient. It'll show up. Probably.
Posted by The New York Crank at 2:39 PM 53 comments

A Republican police state? Believe it! Republican Joe Miller “privately” busts a blogger for “trespassing” at an open public gathering. 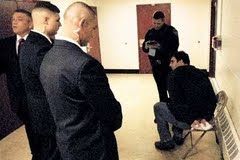 The photograph from the Anchorage Daily News shows some goons with military haircuts – they’re private security cops – standing over the handcuffed editor of an Alaskan blog called the Alaska Dispatch.

The editor is Tony Hopfinger. According to the Anchorage Daily News, Hopfinger had showed up at a rally that had been advertised by the campaign for Republican senatorial candidate Joe Miller, urging people to bring “friends, colleagues, family, acquaintances and neighbors.” The rally was held on public property, a school.

But Hopfinger evidently didn’t like the questions he was getting asked about his politics, his honesty and his private life. When Hopfinger walked after him asking questions and pointing a video camera to get Miller’s responses, he was grabbed by the private security goons, "arrested," handcuffed, and his recording was erased.

Reporters who tried to film, photograph or interview Hopfinger were also threatened with arrest by Miller’s thugs. When the Anchorage police finally arrived, they ordered the Miller people to release Hopfinger.

Now Miller’s blog is smearing Hopfinger, claiming that he “lost it” at the rally.

What if Republicans like Miller get elected? Seems like you can count on getting arrested and publicly smeared if anything you say or believe doesn’t agree with them.

There goes your freedom of speech and freedom of the press. Here come Republican-run political prisons.

Be sure to check out the whole story in the Anchorage Daily News here: 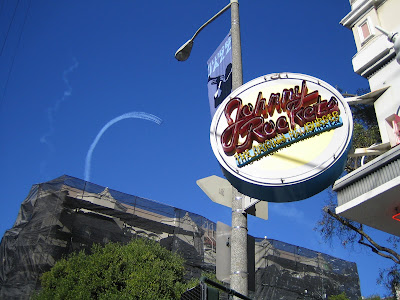 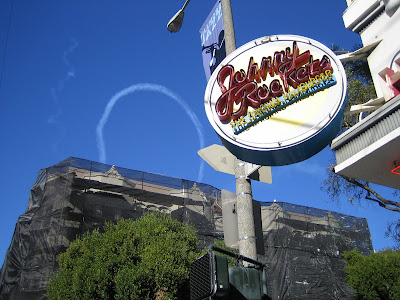 The U.S. Navy was in San Francisco last weekend, helping the city celebrate Fleet Week. By chance, I was also there.

I have nothing against any city having a Fleet Week. We have ‘em here in New York, too. But there’s a bit of a difference. In New York we’ve seen what an airplane crashing into a building can do, not only on 9-11 (over 3,000 innocent Amerians dead), but also as far back as 1960 when two passengers airplanes collided in mid-air over the city, taking out an entire city block and leaving 134 passengers and earthbound Brooklynites dead.

I was a newspaper reporter at the time of the Brooklyn air disaster. I personally watched a father tearfully announce to a press conference in a Brooklyn hospital that his 11-year old son, Stephen Baltz, who had originally and miraculously survived the initial crash, had succumbed to burns some hours later. It was a heartbreaking lesson on exactly why tightly spaced aircraft and residential spaces don’t mix. Not ever.

So you can imagine how extraordinarily infuriated I was last weekend when, on a trip to San Francisco, I was walking down a street when four tightly spaced jet aircraft suddenly roared above a residential street at low altitude and formidably high speed.

People jumped. A woman in a car screamed. Some held their ears to prevent damage from the outrageously loud noise. And this kept going on, hours at a time.

It was the “Blue Angels” air show, and for what I suppose was a laugh they were buzzing San Francisco. They did it Saturday. They did it Sunday. I hear they also did it Monday.

Take a look at the photographs above. I shot them from the corner of Fillmore and Pine Streets on Sunday afternoon. In the first picture, you can see a squadron of four navy planes in tight formation flying over San Francisco homes and office buildings.

The second picture is of the vapor trail they left – a 360-degree loop-de-loop. The peril to the lives of San Franisco’s inhabitants was beyond irresponsible.

Yes, I know the Blue Angels are supposed to be America’s best young pilots. I know their planes are ship-shape. As they used to say about potential oil spills before “BP” became a household curse word, a disaster couldn’t possibly happen.

Except that we all know the “impossible” is also inevitable when it comes to technology developing glitches. Sooner or later something will go wrong – a millisecond of pilot disorientation, an unforeseen mechanical failure, a stray bird that isn’t supposed to be there getting sucked into a jet intake.

When that happens, scores, hundreds or perhaps even thousands of innocent bystanders will be dead, the property damage will be horrendous, and Navy and city officials will be quick to absolve themselves of blame.

Guaranteed: some hapless junior officer will get screwed

In the end, some poor junior officer will catch a court martial, taking the rap for the big navy brass, who will then head for the officers’ club and treat themselves to a stiff drink for getting away with yet another totally irresponsible idea that destroyed lives and property.

Shame on the Navy brass who allow these demonstrations over American cities and think risking American lives for a bit of "show biz" is a great idea. And shame on Mayor Gavin Newsome of San Francisco for not demanding that the Navy fly boys immediately pick up their toys and fly the hell out of his town.

Posted by The New York Crank at 5:49 PM 4 comments

Revenge tastes best when it crawls, bites and is just a bit icky

From The Wall Street Journal, one of the extremely biased right wing News Corp'ss own publications, comes a blog with the cheering message that Rupert Murdoch has bedbugs.

Well, at least his offices probably do. So if I were you I'd be careful about taking home a copy of The Wall Street Journal, Barrons or the New York Post. Just to be absolutely, positively on the safe side (who knows what those cables can transmit?) I'd avoid watching Fox News, too.
Couldn't happen to a nicer twister of a news, spitter on journalistic tradition, and pooper on the truth.
Posted by The New York Crank at 1:46 PM 1 comments