Going home for the holidays? Don't let the TSA grope you. Fly nekkid! 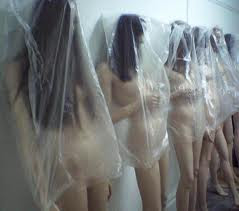 Hey, at least they won't have an excuse to touch you.

Posted by The New York Crank at 3:55 PM 0 comments

In Madagascar, an island nation off the coast of Africa, a bunch of tinpot colonels and other military types decided to take over the government.

That was a day or so ago. Since then, the military usurpers seem to have found themselves up a certain unprintably-named creek without a paddle.

Seems the usurpers, having announced that they were bringing the government down, have – umm – retreated to the safety of their barracks. Maybe they could still pull this thing off if the new president will negotiate, but so far he seems to be telling them to go jump in that creek they're stuck in and take a few deep gulps of swamp water.

Now right here in the United States, Senator Mitch McConnell, Representative John Boehner, and lately Senator Jon Kyl, Republican problem children all three of them, are also threatening to bring down the president and make him a one-term phenomenon.

Yes, their actions would bring the government to a halt for the next four years. Yes, they're endangering the United States economy and what's left of the prosperity and health of every American citizen. Yes, their near-treasonous attempt at a forceful overthrow of the presidency is even endangering us diplomatically and militarily.

But the thing is, you see, they think Barack Obama will negotiate himself out of power if they keep this sociopathic stuff up. And his behavior since he came into office gives them a rational basis for thinking this way. So...

Memo to President Obama: Stop trying to negotiate with politicians who are trying to kill you. If you explain your case to the American people carefully, forcefully and frequently, they'll see that their interests are in line with yours, not the subversive Republicans.

Memo to McConnel, Boehner, Kyl and other Republicans: You might win this. But you might end up getting sent back to the barracks, your butts whupped, to sit in the corner with your dunce caps on until you're voted out of office. Is it really, really worth the gamble to you?

Posted by The New York Crank at 3:20 PM 2 comments

A plan to fix the U.S. economy in 12 months or less

Back under the Bush Administration, Congress in 2006 passed legislation that lets the President declare whomever he wishes as “enemy combatants” and have them locked up.

I was always opposed to this idea. It’s a license to sweep off the streets you, me and anyone else the President of the United States doesn’t like — and then toss us into the pokey indefinitely. Even into an off-shore pokey, say in Guantanamo.

But wait! A thought occurred to me. There’s grounds to say that Senator Mitch McConnell, Congressman John Boehner, and various other Republicans and “Teabaggers” are sabotaging the American economy with their "policy of no” and demands for a balanced budget without serious tax increases. That’s a route that would sink America faster than a torpedo can sink a rowboat, and therefore a crime equivalent to terrorism against the American people.

If the Republicans and Teabaggers have it their way, they will bankrupt the American economy and send our nation tail-spinning into poverty and ruination.

So instead, let's use the law we have on the books — passed with enthusiastic Republican support, by the way — to sweep all the obstreperous sabotagers of the United States and our economy out of Congress and the Senate into prison. While the President is at it, declare as enemy combatants Justices Scalia, Thomas, Alito and Roberts for the same crimes, which the President evidently can define any way he wants.

Then break up the banks into little regional entities so that they’re no longer “too big to fail.” Arrest the Wall Street fat cats while we’re at it and send them to Guantanamo with McConnell And Boehner and Alito and Roberts. Oh, and the corpses of Ayn Rand and Milton Freedman.

With the assent of the House Democrats and a few complaint Republicans, raise taxes on the top incomes. Forget this 30-something or 40-something percent crap. For incomes over $600,000, get the top tax bracket up to 50 percent. For incomes of a million and over, create an 90 percent tax bracket.

Use the money to pay off the deficit, put a firm footing under Social Security and Medicare, rebuild the infrastructure, finance fledgling businesses that will enable us to build our own solar power plants and other energy sources instead of buying them from China, make higher education free for anyone who can pass tough entrance exams, and provide seed money for small start-up businesses.

We’ll fix the economy. Fix the educational system. Fix the infrastructure. Fix the banking system. And fix the deficit in the bargain.

When all that’s done, a new Supreme Court can declare unconstitutional the law that imprisoned all those right wing bad guys and we can let ‘em out of Guantnamo — assuming they’re still alive after all the waterboarding that we'll give ‘em to confess on TV the truth of their intent to undermine the United States .

What? You say people who are waterboarded don’t tell the truth — they just say whatever they think you want to hear so you’ll stop waterboarding them?

What? In contradiction of George Bush and his new autobiography, you think waterboarding is illegal and torture?

What, you say that sweeping obstreperous legislators (or any other American citizen) off the street shouldn’t be permitted?

I agree with you on all of that, Dude. But hey, which way do you want it? Because you can’t have it both ways. Either repeal the law or use it to fix the damn economy.

Posted by The New York Crank at 5:25 PM 2 comments

Want to be scared? Suppose I tell you that a bunch of creeps is watching your every move, even what keys you press on your computer?

For openers, it'll make you want to get a crowd with torches and pitchforks chanting in front of Nielsen, the "marketing reserarch" firm, demanding the heads of their snoops on pikes.
And oh, by the way, you're not the only one being watched. They're watching your kids, too.
Creepy, I promise you!
Posted by The New York Crank at 11:54 AM 0 comments