Why this blog is taking a short break

My arthritic right hip is the only thing that has ever caused me more pain than my ex-wife’s matrimonial lawyer. Finally, I’m almost on my way out the door for hip replacement surgery.

I've already had  enough dental implants to put a periodontist’s kid through Hotchkiss and Harvard. Add those to the hip surgery and I'll have more installed replacement parts than a 1953 Chevrolet in downtown Havana.

I’m told I’ll be too doped up to write for a short while when I return home, and after that too busy learning  new skills, such as how to get in and out of a  bath tub without undoing the surgeon’s work, and how to put my socks on.

So for a while, blogging will have to take a back seat to physical therapy, which also involves someone coming to my apartment and forcing me to do exercises that will help me to walk, bend, twist, sit, and perform other amazing feats that I used to take for granted.

(A friend who has been through this whole routine told me he had an excellent physical therapist, and that he would be happy to recommend her. “What’s her name?” I asked him. “Mistress Pam,” he said.)

Figure I’ll be back early-to-mid-to-late August. Give or take a little.
Posted by The New York Crank at 2:27 PM 6 comments

Kid Rock for Senate? In a country that already has Ghengis Trump for President, what could possibly be weird about that?

So I gather that the social networks are figuratively setting the Internet on fire with news that Kid Rock is suggesting he will run for the Senate.
Kid Rock isn’t saying where he’d run, although presumably that would be Michigan, where he lives. On the other hand, I don’t imagine he’d do too badly in Idaho or Wyoming, either.

I mean, why not Kid Rock? American government, and consequently American politics, has turned into a puppet and clown show anyway. Which brings me to Howdy Doody.

In case you’re not old enough to remember, Howdy Doody was the string puppet hero-in-a-cowboy-suit of children’s television starting around 1947. And one of his compadres was Clarabel The Clown.

I became aware of the puppet and clown act as a little kid, watching Howdy's show on a nine-inch TV screen with a magnifying glass in front of it, at a friend’s house. I had to watch it at that venue because it would be another three years before my father decided that television was actually a thing, and invested in a TV set of our own.

I bring up Howdy Doody because one year — I forget which year — the doofus puppet decided to run for president. These days, the phrase “doofus puppet running for president” is pretty nearly a tired redundancy. Just look at the White House and Russia to see what I mean. But I digress.

Howdy even had a campaign song. I heard it so many times that I committed it to memory — which was easy for a kid with less than a decade of living under his belt and not many channels to switch to in those days.

He will never be hesistant

To fight for the rights of girls and boys.

Or should that be pronounced, “girls and boyce?”

And wouldn’t you know it, Howdy Doody did no less for America than Donald Trump, which is to say, nothing — although Howdy's gifts for self-promotion were no less Trumpian than Trump’s.

So far in this century, nearly all of the clowns and puppets running for President, or Senate, or the House of Representatives, or other offices, have done so on the Republican line. They’re often easily identified by their puppet or clown names. I’m talking to you, Florida Representative Yoho, as off to work you go. And you, Reince Preibus. And you, Governor Butch Otter of Idaho.

Not to mention other political officeholders and wannabes like you, Young Boozer, state treasurer of Alabama. And you, Twinkle Cavanugh, President of the Alabama Public Service Commission. And you, Judge Lawless of Michigan. And you, Candidate-for-Sheriff Shotwell, of Washington State.

But let’s get serious for a moment. Whether or not Kid Rock makes it to the White House, a lot of people are wondering whether Donald Trump Junior will make it to the clink for various un-American activities relating to trying to find some actual, genuine, evidence-based dirt on Hillary Clinton, by taking secret meetings with Soviet agents.

I don’t think so. In fact, I suspect that if Donald Junior is ever indicted for anything, his father will instantly pardon him, thus sparing the nation from a trial during which all kinds of new clown acts and puppet shows could be introduced to the public.

The big question is, when the time comes, will President Donald Trump pardon himself? And if so, what will Senator Rock do about it?

Posted by The New York Crank at 4:38 PM 0 comments

In 1885, a young man named Freidrich Trump, arrived as an immigrant in New York City.

What happened next? Well, let's quote directly from The New Yorker Magazine,  discussing a book called "The Trumps," by Gwenda Blair. The New Yorker tell us: 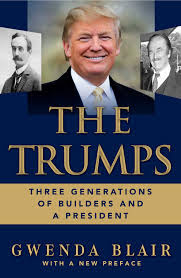 Then, suddenly, in 1891, Friedrich was off to Washington State before going to the Klondike regions, where he pursued a colorful career providing food, liquor, and women to miners—a period that is well-documented by Gwenda Blair.

Yup. Probably with miners lined up just outside the tent. Step inside, pay your two bucks, drop your drawers and have a go at it. Taking off your muddy boots before you get into bed with poor Achin' Annie? I'm going to guess that was optional.

But surely the money was cleaned up by….um…time, right? Isn't time the great money launderer? Passed through a filter of the decades, smoothed, and pawed, reinvested and lovingly handled by three generations of Trumps, the dirty Trump money became clean again, right?

Freidrich’s son was named Fred. And guess what?

His son, Fred, took advantage of New Deal policy, using government subsidies and loopholes to construct hugely successful housing developments in the 1940s and 1950s. The profits from those enterprises paved the way for Donald's roller-coaster ride into the new century.

Far be it from me to spoil your July 4th barbecue with a litany of  Donald Trump’s lies, foreign emoluments, ruinous bankruptcies, not-so-blind trusts, inappropriate social behavior, the mass ripoff that was Trump University.

Suffice it to say that only in America could the grandson of a poor immigrant pimp grow up to be a rich, crooked President.