A guest editorial on healthcare from the Crank's cranky brother 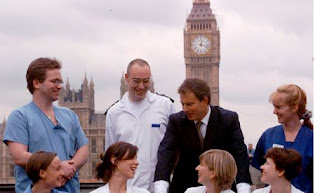 No no no, don't get your bustle in a twist. I'm still on an assignment that precludes me from any regular contributions to this blog.

However, my cranky younger brother sent me an e-mail expressing his rage over Republicrap anti-healthcare scare tactics, and this seems like a cheap way to remind my readers I'm still here.

So think over the irate rant that follows (Is "irate rant" a redundancy?) from the Somewhat Younger Crank.

Incidentally, I have no idea which anti-healthcare dickhead he's all worked up about — there are so many of them opposed to a public health care option — and I wish he'd learn to spell "dickhead." Unless, of course, there's a Congressman Didkhead about whom I haven't heard. Anyway, my cranky brother wants to say:

Feel pissed that the American Public is being subject to panic messages once again? Here's a chance to write a reply to put this didkhead in his place and then you can use it, in some form, for your blog.

-My friend had to wait less than three weeks from diagnosis to operation. Less time that I had to wait here in the US for the same operation.

-If British care is so bad, how come almost no one in England will vote against it?

-Britain gets better medical results than we do.

-Anyone I have known from England loves their system..the only complaints I have heard, was from Americans telling me how the English hate it.

-The English Empire fell (Great Britain) for reasons other than its national health care system.

-The Principal Group sells health insurance...having been in that industry I know how big the profit is to agents and their companies. About four years ago, the president of United healthcare, got a 1.8 billion dollar bonus in addition to his 90 million dollar salary. He was fired because he cheated, he was only entitled to a 1.5 billion dollar bonus.

Okay, that's it for another while. I still plan to return in mid-September. But not before.
Posted by The New York Crank at 5:45 PM 0 comments