Yeah, and while we're at it, fellow Republicans, let's not ruin democracy by letting the majority rule 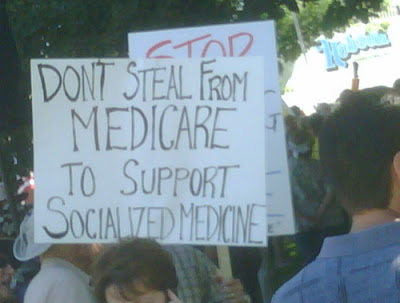 Reuters reports today that having lied and lost on the health care bill, Republicans are trying again.

This time, they’re trying to find that health care is “unconstitutional for, ah, uh…well for some reason or other. They’re a little fuzzy in their reasoning.

That’s about as circular as reasoning—or a firing squad—can get.

They’re now going to go to court to stop Congress from passing laws. In addition to the states listed in the headline, add South Dakota, Texas (of course!), Utah and Washington.

Of course, they don’t just want to give their own states the power to opt out. If that happened, the hurried exodus of citizens and small businesses would sound like the last of a lot of soapy water going down the bathroom drain. They might as well each pull out a pistol and shoot their own toes off.

Instead, they want to get the law nullified for everybody. The truth is, it makes them crazy to think your healthcare insurance would work, even if you’re sick. And that for once you could afford to have it.

Remember who your Republican officials are. And next election, be sure to go to the voting booth and tell them to take a hike.

Posted by The New York Crank at 3:11 PM 0 comments 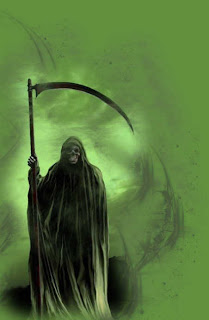 As we press closer to passing or destroying health care reform this week, there is news that special interests are pressuring members of congress to kill the bill. 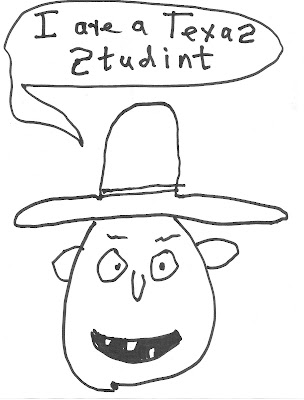 I see in the New York Times this morning that Texas educators are trying to get the textbooks changed. I mean, the dang things are written by teachers and they keep putting in stuff that no self-respecting Texas dentist would put up with. To quote the Times:

Conservatives argue that the proposed curriculum, written by a panel of teachers, emphasizes the accomplishments of liberal politicians — like the New Deal and the Great Society — and gives less importance to efforts by conservatives like President Ronald Reagan to limit the size of government.

“There is a bias,” said Don McLeroy, a dentist from College Station who heads up the board’s conservative faction. “I think the left has a real problem seeing their own bias.”

Yeah, they’re biased. The textbooks don’t say that this here is a Christian nation. Of course, a good many of the founding fathers were deists, not Christians, and a sprinkling of them were Quakers and even Jews.

That’s one reason the Declaration of Independence said that all men are “endowed by their Creator with certain unaliable rights.” Not by God. By their Creator, which may or may not have had divine properties, depending on your belief. It’s a perfect deist statement, inserted into the Declaration of Independence so that the many non-Christian American revolutionaries wouldn’t be offended.

Oh, and those “biased” schoolteachers—pardon me, teachurs—who wrote the textbooks also didn’t pay no mind to Ronald Reagan. Of course, if they also paid mind to how his policies enlarged the national debt and in the case of Iran Contra sold arms to the Iranians who are now building an atomic bomb to threaten us with, the Eddycational Dentists of Texas would be having still another cow.

All this matters because the wimp publishers who print the textbooks kowtow to Texas, a huge purchaser of textbooks. If Texas gets the changes it wants, the rest of the nation’s kids get the same changes. So if Texas gets dumber, so do your own kids.

Look, I firmly believe that all Texans have been endowed by their creator with an unalianable right to be as dumb as they want.

They can believe that Ronald Reagan made government smaller, even though he made it bigger.

They can believe all government deficits are bad, even though Reagan gave us a lollapalooza.

They can believe that lack of regulation isn’t what caused the bankers to good hog wild and nearly bankrupt nearly everybody else.

They can believe that dinosaurs walked the earth until 42 years ago and simply stayed out of sight of human beings. I’m sorry, hooman beans.

But first Texas ought to secede from the union. And this time we ought to let them.

Visit msnbc.com for Breaking News, World News, and News about the Economy

Sometimes I wonder if someone in the Whitehouse is actually reading The New York Crank.

It was only the last post, three days ago, that I crankily wrote:

And I'll be hornswaggled if that isn't pretty much what President Obama did in his stemwinding speech to Congress today. I especially liked this passage:

But know this: I will not waste time with those who have made the calculation that it's better politics to kill this plan than to improve it. (Applause.) I won't stand by while the special interests use the same old tactics to keep things exactly the way they are. If you misrepresent what's in this plan, we will call you out. (Applause.) And I will not -- and I will not accept the status quo as a solution. Not this time. Not now.

If you missed it, take 55 minutes to click on the video at the top of this post and watch it.

Now, if Mr. Obama keeps it up, history could actually end up listing him among our greatest presidents.. And we could get a reasonably good healthare bill. And, in time, a much stronger economy. 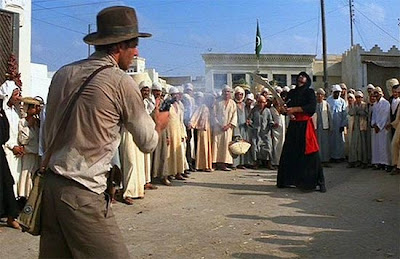 Okay, so we’re a nation of idiots. So Americans need to understand Washington in terms an imbecile could grasp. So maybe I need to explain in comic book and fantasy action movie terms what it is President Obama needs to do.

Remember “Raiders of the Lost Ark?” Remember Indiana Jones, his whip always at the ready, vanquishing foe after foe with his bullwhip—knocking them down, knocking the weapons out of their hands, yadda yadda until it all becomes a bit tiresome?

And then suddenly Indy gets approached by a another posturing thug, a turbaned bozo who not only waves a sword, but does sword tricks with it. But our hero has had enough of this posturing horsecrap. He shrugs, whips out his pistol, and plugs the posturing jerk right between the eyes. In the theater where I watched this, the audience stood up and cheered!

For example, there’s a Republican Senator named Jim Bunning, who has forced the furlough of Federal transportation workers—putting a stop to construction projects that are desperately needed to keep our infrastructure maintained and Americans working. He’s also strangling desperate Americans by choking off their unemployment benefits.

It’s time for President Obama to call a televised press conference and declare:

“If a terrorist tried to starve millions of Americans, render them homeless, and bomb the US economy, we’d have every right to declare him a war criminal, arrest him, and try him for war crimes.

“Senator Jim Bunning, you are the moral equivalent of a war criminal. You are sabotaging the business of the people of the United States. By putting a chokehold on the extension of unemployment benefits and other critical expenditures you are causing hunger. You are causing people to lose their homes. You are exacerbating a severe economic situation, damaging every American, every citizen, every taxpayer. I’m calling you out, Senator Bunning, as the the closest thing there is to a traitor who deserves to be turned out of office and run out of town on a rail.

“Now let me talk about another moral equivalent of treason—the actions of that smug, smirking Senator Mitch McConnell, who is creating Tokyo Rose-type propaganda to demoralize and mislead Americans who simply want affordable healthcare….”

There’s ample precedent for the President to publicly call out the troublemakers. Franklin Delano Roosevelt did it—and achieved the New Deal—by sneering at a trio of bloviating enemies of America, the infamous “Martin, Barton and Fish.”

Would the obstreperous senators who’ve currently afflicted the Congress and the American people with legislative sclerosis tremble in their shoes, even as they pretend to outraged? Sure they would. But in short order they’d also buckle, particularly if the next step is public torchlight demonstrations in front of their homes, angry throngs calling for their heads in Washington and demands for investigations of their financing and their intentions.

So enough with the bullwhip, Mr. President. Pull out the pistol that was installed in your bully pulpit by virtue of the overwhelming majority of people who voted for change and now want to see you either change things or at the very least make an all out effort that will leave the obstreperous Republicans with something a bit messier than egg on their faces.