Caught with its pants down lying and insisting that it did pay Federal income taxes while the truth is it actually didn't, GE tweeted its knickers into a twist. (Okay, so I'm muddling metaphors. So kill me.)

Here's a link to the story by Henry Blodget on Business Insider, called 'WHO'S FULL OF CRAP? GE, the New York Times, And the Hazards of 'Tweeting The Record Straight.'"
You have to read it all the way through to the very bottom, because first it looks like GE is lying, then that it isn't lying, then that it is ... and so on until they get caught red handed (but evidently not red-faced since outright lying is turning into big business standard operating procedure.)
It's time for Congress to come down hard on tax-beating big business. (Yeah, that'll be the day.)
Posted by The New York Crank at 12:09 PM 0 comments

Hey, Bruce Barlett: You can cut Medicare deficits by negotiating with drug companies instead of cutting drug plans, you pill! 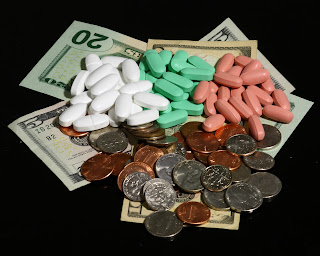 Over on the Underbelly blog, my friend Buce observes that Republican opinion-maker and supply-sider Bruce Bartlett is melting down over drug costs that George W. Bush signed into law.

Up in Canada, they get the same drugs that Americans get for half the price or less. How? The government negotiates with the drug companies.

Medicare isn’t permitted to negotiate under a law passed because of Republican pressure and a few Dems in the pockets of some drug companies. So the drug companies charge you and me more, and then charge the government more – and that second charge also comes back to you and me in the form of taxes or deficits.

If you cut all the “don’t intefere with business” garbage and simply stuck the fingers of some multi-million dollar salary drug company poobahs into thumb screws, the price would fall faster than a drunk tripping on a curbstone.

There’s more than one way to cut a deficit and effectively robbing millions Americans by drowning them in costs isn’t one of them.

A St. Patrick’s Day memo to the lunatic fringe birthers who think this nation’s President is a Muslim secret agent. 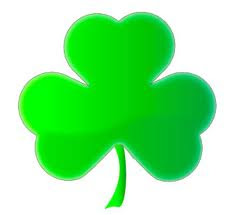 On this St. Patrick’s Day, I’d just like to remind you that his name is O’Bama. 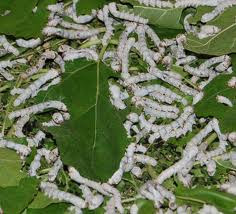 From the New York Times comes a story by John Tagliabue that you really, really gotta read.

Seems that over in Holland, some enterprising butcher is now offering bugs as an alternative to steaks. The idea is to convince Dutch citizens that bugs – from various kinds of worms to caterpillars “are healthier sources of protein, and are less taxing on the environment, than steaks and pork chops.”

Well, that’s true, of course. But the same thing can be said of eating your own uncle’s dead body – a Roast Rump of Unc, for example.

This is the kind of story that inspires my class warfare paranoia. Are the filthy rich really so greedy that rather than pay a nickel in taxes to grow the economy for the rest of us, they find it easier to convince us that food only a lizard would eat is better for us and the environment?

When I see broiled locusts and roast millipedes on the menu at Smith and Wollensky, I’ll believe it.

I couldn’t wait to get the hell out of a restaurant down in Oaxaca, Mexico a couple of years ago where one of the features on the menu was fried crickets.

On the other hand, to get back to one of my earlier points, maybe a fried Republican wouldn’t be so bad after all.

Feel free to contribute your own menu suggestions and recipes. Just try not to make it too vulgar or disgusting, or I’ll throw up over my computer keyboard and won’t be able to hit the post button.

Posted by The New York Crank at 4:59 PM 1 comments 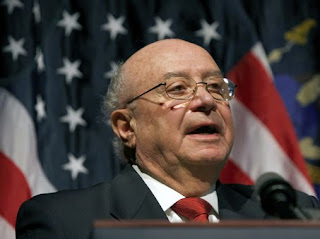 Staten Island Republican Borough President James P. Molinaro (the jerk above, right) wants to sell the naming rights to a public bridge between Staten Island and New Jersey. The bridge will undergo some rebuilding soon.
Anything to avoid taxing the rich contributors to Molinaro's campaign and the incomes of their fellow rich Republicans.
But I have a solution:
What we need is some public-spirited person with a lot of bucks to bid the top dollar to name the bridge, "The Borough President James P. Molinaro Is An Asshole" Bridge.
Whaddya wanna bet, if that happens, that Molinaro starts walking his idea backwards?
Posted by The New York Crank at 1:46 PM 2 comments Check out this report in the Guardian. It makes the Exxon Valdez and the Gulf BP spill feel like a walk in the park.

Full disclosure: I came upon this Guardian story because I own stock in Royal Dutch Shell and I was looking for info that might help me understand why the stock price has been dropping in a generally-rising market – rising for stocks, rising for petroleum.
Maybe it's those 1,000 spill cases filed against Shell, one for over a billion bucks. Maybe it's time for me to sell my Shell stock.
Posted by The New York Crank at 12:58 PM 0 comments 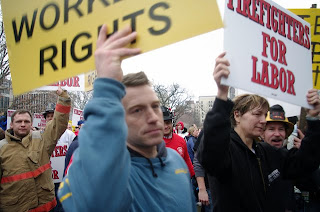 I’m an old guy. When I was a kid growing up in middle-class Brooklyn, every other kid I knew had a union member in the family. That’s why we were middle class in the first place. It was the unions that got our families living wages, job security, and the promise that retirement wouldn’t get lived out in penury.

It was the unions that saw to it our parents had enough money to send us to college, where the first rate professors had tenure thanks to their own union, the American Association of University Professors.

Unfortunately, it was also in college that most of my classmates became “professionals” – which, with the exception of the doctors and the lawyers, had no meaning other that we didn’t wear a blue collar to work. With their new-found and meaningless "professional status," most of my contemporaries looked down their noses at unions.

For years I worked for ad agencies. We hired actors who received a royalty (called a “residual”) each time they appeared on television in commercials we wrote. Ditto radio announcers. The actors belonged to one of several unions – the Screen Actors Guild, the American Federation of Radio and Television Artists, Actors Equity – that saw to it that each time they helped make money for an advertiser, the advertiser paid them again.

In Hollywood, writers belong to a union and get residuals, too. But not in advertising. Ad writers anywhere in America work at the pleasure of their bosses. You could write a slogan and a commercial that stay on the air and in print for years. The agency will make money. It’s client will make money. And you can be fired the day after you write it. And get nothing.

So advertising people need to organize into unions. So too, office workers, broadcast technicians, marketing analysts, lab technicians, sales clerks and others. Let the bosses who milk your work and live in mansions ,while you live day-to-day making the money they steal from you to do it, know that the union will make you strong. You want your pension. You want your healthcare. You want your boss to pay for it. And if you don’t get yours, not only will your union go out on the street, but so will all the other unions that print, or manufacture, or warehouse, or sell what you make. And your union will do the same for them.

If we can get even a quarters of the Americans working in offices to unionize again, we can see the end of campaign financiers like the Koch Brothers yanking the strings they've got tied around the testicles of their little pull toys like Wisconsin’s governor, Scott Walker. The unions will have enough money to equal the ad expenditures of the Koch brothers. And they'll be able, via general strikes, to bring any state to its knees for refusing to negotiate with its own employees. Or any rapacious private corporation.

Call any existing union near you. Ask how they can help you get the workers in your own office unionized. Then go do it! And tell the bosses they can go thank Scott Walker that their own employees are unionizing.

Posted by The New York Crank at 1:02 PM 1 comments