This is a photograph of Governor Scott Walker of Wisconsin: 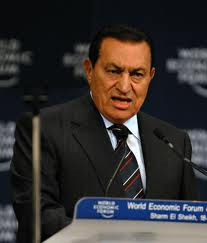 I’m kidding of course. But also I’m not kidding. Governor Walker’s high-handed, bullying and autocratic ways would have fit right in with the way “President” Hosni Mubarak ran Egypt as a private dictatorship, before crowds of angry citizens drove him out.

In case you’ve just flown in from Mars and missed the Wisconsin story, Walker says he’s trying to solve Wisconsin’s budget crisis – a crisis he and the Republican legislature manufactured by pushing through tax cuts that left Wisconsin with a budget shortfall. His "solution" is to deprive the state’s teachers and some of its civil servants of the right to bargain collectively.

The state’s workers are justifiably outraged. They’ve been gathering by the many tens of thousands in Madison, the state’s capital, to protest peacefully – a demonstration strongly resembling the demonstrations that brought down Mubarak.

Walker has been following Mubarak’s strategy. First he refused to budge. Then people in his party began offering too little, too late. What appeared to be a trial balloon was sent up by State Senator Dale Schultz. It called for unions to lose their collective bargaining rights, just the way Walker wants, but then to have them reinstated in two years. "I'm robbing you at gunpoint now, butI'll make it up to youy two years from now.” Yeah, right.

The teachers and civil service unions are crazy if they buy into any union-busting offer – and so far they haven't. Meanwhile, the state’s Democratic legislators are staying out of state so that the Republicans can’t gain a quorum and ram through a revision of elementary workers’ rights.

Let’s hope the unions have the gumption to keep on staying out there demonstrating until the state comes to a halt and the governor, like his look-alike Mubarak, has to resign and flee.

And let’s hope that just the way the movement that brought down Mubarak after it spread from Tunisia has now spread to Algeria and Libya, the movement to stop Republican autocracy will spread from state to state, bringing down one arrogant Republican governor after another.

Got nothing to do this weekend? If you’re in Wisconsin, join the peaceful demonstration and help bring Hosni-Mubarak-Walker to his knees.

Note on another subject: I am still mourning the Crank's Beautiful Girlfriend and will be posting only sporadically for the next few months.

Posted by The New York Crank at 1:58 PM 1 comments