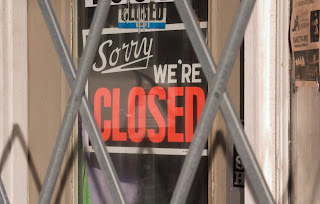 Posted by The New York Crank at 5:05 PM 0 comments 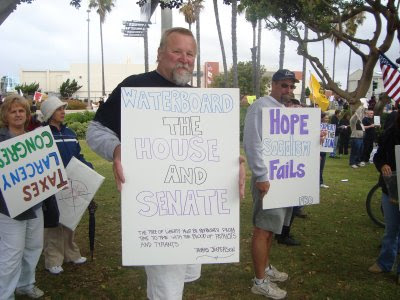 The recent flurry of so-called “Boston Tea Parties” would be outrageous if anybody (other than CNN) took ‘em seriously. But how could anybody when clowns like these show up? And check out the lady in the background left. She doesn’t even know which side is up.

Thank you, Steve M at No More Mister Nice Blog for staying on their case.

Gum-chewers, Singapore, and hanging offenses. Listen carefully to this, you gum chewing b*st#rds!

I usually don’t advocate the death penalty, except for Osama bin Laden and certain Wall Street razzle-dazzle ripoff artists of the derivative persuasion.

So I’ve been controlling myself as best I can to keep from advocating death for gum-chewing slobs, but it’s getting harder. Let me tell you a story about that.

It was raining the other day. I had a business meeting to attend later in the afternoon, so I was better dressed than I usually am when I go to my gritty workspace on a gritty block in one of the grittiest parts of Manhattan. It's the kind of block you'd want to use for a setting in a noir novel.

The street is lined with buildings that rent out their storefronts to wholesale dress shops peddling cheap rags to cheesy retailers. Upstairs there’s mostly garment factories where undocumented workers still slave away for starvation wages. Just for variety we also have a gypsy fortune teller, a greasy no-name fried chicken place, a liquor store with Plexiglas panels to protect the sales clerks from their own patrons, and, in my building, a company that rents out telephone booth-sized desk spaces to self-employed working stiffs like me.

It was raining, so I was carrying an umbrella. I sat down on a bus to go to work. Since the umbrella was wet, I leaned it, closed, against the side of the bus. But when I got up to leave and grabbed my umbrella, something disgusting happened.

Somebody had stuck a wad of wet chewing gum to the inside wall of the bus. It was so low I didn’t see it. But it attached itself to my umbrella handle. When I grabbed the umbrella, a long, sticky, saliva-soaked strand of it stretched from the umbrella to the wall.

I tried to get the gum off. No way. It was like gum on the bottom of your shoe. You can scrape and pull and tug, and still the gum is there. Every office building and large apartment building in New York these days has a power washer, just to blast the gum off the sidewalk. Apply that kind of water pressure to your shoe and you might blow a hole in your foot. Apply it to your umbrella and goodbye umbrella.

But as I said, I tried. For my efforts, I got several strands of gum stuck to my umbrella handle, my hands and my suit. My brand new beautiful suit.

And that's when I
thought about Singapore.

In Singapore, possession of chewing gum is a crime. And Singpore is a no-kidding-around kind of country. Or city-state. Or whatever the hell it is. One thing's for sure. The place is a nightmare for everybody except chewing gum haters.

Four years ago they hanged an Australian citizen for possession of 14 ounces of heroin. He wasn’t selling it in Singapore. He was merely carrying it when his plane, bound from Cambodia to Australia, happened to put down in Singapore for a while.

This same country knows what to do about chewing gum. It’s outlawed. Gum smugglers don’t get the death penalty. But they can get a year in prison plus — and this is a big plus — five strokes with a cane.

This is no love-pat. A single stroke of a bamboo cane applied to your back can send flesh flying and scar you for life. Five strokes could put you in the hospital — if the authorities ever put jailbirds in a hospital.

And if you’re so much as caught chewing the stuff

… [the] act of chewing gum in Singapore is associated with similar penalties to those imposed for littering. The littering law requires a fine of $500 to $1,000 US Dollars (USD) for first time offenders. Repeat offenders may be fined up to $2,000 USD and assigned a Corrective Work Order (CWO). When serving a CWO for violating littering laws, offenders are made to clean public spaces, often while wearing a bright colored jacket. The media may also be invited to cover the event, increasing the severity of the penalty though additional public shame. The CWO as a penalty for chewing gum in Singapore was reportedly implemented in November of 1992.

So what I want to know is, where is repressive government now that we need it.

It's time we rounded up those pigs who chew gum and then throw the stuff on the ground, or stick it to the bottoms or sides of busses, the undersides of movie seats, the bottoms of restaurant tables...and cane the living daylights out of them. So far as I’m concerned, the definition of a gum litterer is every last damn gum-chewing S.O.B. on the planet.

Got that, you gum-chewing slobs?

And if caning doesn't work?

There’s always the gallows.
Posted by The New York Crank at 11:02 AM 3 comments 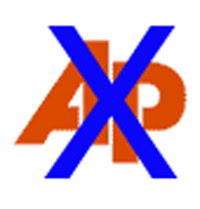 Outside magazine to freelancers: “Your check is in the mail.” Yeah, next fall’s mail, maybe.

There’s a reason they call writers “ink stained wretches.” And their life grows even more wretched if they get an assignment from a once-nifty magazine called Outside.

According to Fishbowl NY, a media blog,

While paying freelancers late "has always been an Outside thing," according to one source, in conjunction with the deteriorating economic climate, "it's only gotten worse." Multiple people with intimate knowledge of the situation at Outside reported payments being sent an average of four to six months after publication, with some invoices nine to 12 months past due. One person confirms being owed more than $10,000, and sources say that's the case for other contractors, as well.

A particular point of freelancer ire is how Outside sends reporters and photographers around the world, with them fronting the cost of those trips for overly long periods of time. One person said the magazine's failure to reimburse these expenses in a timely fashion puts the writers and photographers in a difficult position, as they can have thousands of dollars on their credit cards for half a year or more. "A lot of people want to work for Outside because they send people all over the planet, but it's very expensive and freelancers expense everything," the source explained. "[Outside owner Larry Burke]'s mentality is, 'Hey, I sent you to the far reaches of the world, you should feel lucky.' You can't do business like that."

Geez, Outside, I was planning to renew my subscription. But ya know what? I’ll send in my order a year or so from now. Meanwhile, why don’t you send the magazine ahead anyway?

Trust me. I’m good for the money.