Fallout from Onion spoof reporting on a “hostage-taking” Congress proves nobody in Washington has a sense of humor. Least of all Republicans. 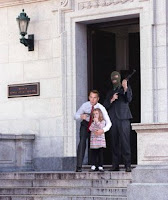 If there’s anything Congress hates more than an agreement that could put the United States back on a stable economic footing, it’s a spoof that highlights its Republican-driven incompetence and irrationality.

The satirical newspaper The Onion ran a spoof – both online and in Twitterfeeds – that purported to follow Congress taking twelve children hostage and demanding $12 trillion to let the kids live.

A half brain-dead idiot would have to know it was a spoof, and a damned pointed one at that. It featured a Photoshopped picture of John Boehner holding a pistol to a little girl’s head. That’s it, at top right.

The spoof included a Tweet that said, Three-course lunch from Charlie Palmer's Steakhouse delivered as per Rep. Boehner's demands #CongressHostage

And what was that, if not a pointed reference to the fact that in the United States, wretches starve while the Congressmen, who could turn around the economy if they wanted, instead stuff their faces and make trouble for the nation?

The spoof even included a followup story that involved the pompous pontificating of Senator Mitch McConnell, who has had a major hand in holding up agreements in the Senate. Here’s the Onion explaning McConnell’s alleged position on the ransom:

Obviously, the most important thing here is to reach a deal that works for both sides," read a statement from Senate Minority Leader Mitch McConnell on the disputed $12 trillion agreement that would free the young children currently being held at gunpoint by the country’s legislative branch. "But many important questions still remain: How will the ransom money be allocated? How can we cut needless expenditures such as individual ski masks for every congressman? Should there be a stipulation to take one of the children with us to ensure a clean getaway? Unfortunately, it may be quite some time before we can reach an adequate consensus on these and other issues." At press time, FBI officials said Congress had moved to extend the money drop-off deadline until early December.

The bad congressional behavior that inspired this spoof was so pointedly reflected in this story that the Republicans must have had a Category Five meltdown. Next thing you know, the Capitol Police — this is for real now — began investigating the Onion reports.

C’mon! What’s to investigate? We know where the report originated. At the Onion. We know what their motivation was: to spoof Congressional bad behavior. And we know who did it: The Onion staff members.

I met a few dumb cops in my police beat reporting days, but never this dumb. Why do I suspect that the cops aren’t "investigating" on their own?

Why do I think that somebody on the Republican side of the aisle is putting them up to it — perhaps by threatening sotto voce to cut the Capitol Police budget is they don’t make a big deal out of this to punish the Onion staff?

Instead of investigating The Onion, I have a better idea. Let's investigate Congress.

Famously, during his U.S. Supreme Court confirmation hearings, now-Justice Clarence Thomas decried his own "high tech lynching" when accused of sexual harassment of a woman who worked for him. (A recent check indicates this link isn't working. Oh, damn!)

But when it came to an opportunity to prevent the low-tech lynching of Troy Davis, now executed for a murder he probably didn't commit, Mr. Thomas took a pass.
More in the post, "Capital Punishment For Dummies," recently left at No More Mr. Nice Blog at the invitation of the blog's proprietor.
Posted by The New York Crank at 10:54 AM 2 comments

Republican budget cutters to vets who went through hell sacrificing for America: “Screw you!” 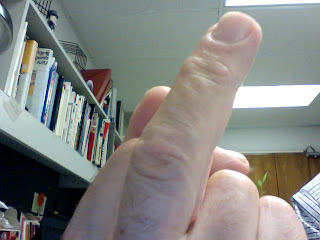 If you need still more proof that the budget-cutting Republicans who refuse to raise taxes and want to kill off Medicare and Social Security have no interest in America, its economic future, its military security, or even its heroes, check out this:

Yup, the same crowd that embraces people who shout out at meetings with Ron Paul that uninsured Americans should die (and then complain about nonexistent “death panels”) now want to cut so deeply into the budget that even those who fought, suffered, or were grievously wounded in Iraq and Afghanistan are on greed's chopping block.

Republicans are not interested in the future of America. They are interested only in the propagation of their greedy, anti-American, anti-full employment doctrines.

Posted by The New York Crank at 2:41 PM 1 comments

Credible shmedible! Who gets to search the body cavity? 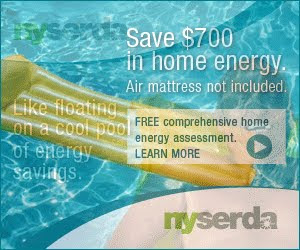 No, the ad at right is not there by mistake. I’ll get around to it. But first I have to tell you the news:

A woman was arrested on “credible evidence” that she was smuggling heroin across the Mexican border in a certain, umm, body cavity. She was busted in or near Las Cruces, New Mexico. A judge ordered that she be taken to a hospital so that her, you know, body cavity could be searched.

The good news is that the rather embarrassed Metro Narcotics Agency is picking up her hospital bill. Thus they avoid becoming a target of unquenchable ire and extreme ridicule. But the whole incident raises a number of questions:

• New York City was in near panic mode on the 9/11 just past over “credible evidence” that there was a plot to bomb us, or blow us up somehow, or something or other. A lot of cops and firemen made a lot of overtime money converging with lights flashing and automatic rifles at the ready around various points in town. A lot of TV newscasters spent a lot of time talking about nothing else. I rode the subway on 9/11, and for the first time in months, if I had seen something (which I didn’t) I could have found a cop to say something to. Which raises the question of whether we ought to have a legal definition of "credible evidence." Was the evidence that some desperate guy on a waterboard said something to keep the CIA from forcing more water up his schnozz? Was the evidence two guys overheard talking in a bar in Toledo? I mean, come on!

• The woman in Las Cruces got billed $1,122 for the body cavity search that was forced on her. Which involved what? Let’s say someone at the hospital looked into not just one of her cavities, but every orifice in her body, from ears and nostrils on down. How much medical skill does it take, and how long does it take, to shine a light in, stick your umm, tongue depressor in, look around and say, “Nope, no shipment of heroin in here!” Let’s generously say ten minutes. That comes to $122 a minute in compensation for the hospital. And you wonder why your medical insurance is so expensive, or why Medicare is supposedly going broke?

• What kind of qualifications do I need in order to get hired as a body cavity searcher? I promise you, I’m not being kinky. Some of those cavities can be downright unpleasant. But at $122 a minute (that’s $7,320 an hour) I’ll grit my teeth and take the work.

•Finally, an explanation of the ad above. It appeared next to the article about the $1,122 orifice search on the website of the Las Cruces Sun. A subhead says, “Like floating on a cool pool of energy savings,” whatever that means. But then the ad shows its true Dada-ist colors when it says, “Save $700 in home energy. Air mattress not included.” As if one would naturally expect an air mattress to be included whenever I buy something from the local power company. While they’re at it, why don’t they mention that the pool is not included either, or the water?

But never mind all that. Just tell me were I get that $7,320-an-hour job searching body cavities.

Posted by The New York Crank at 3:34 PM 0 comments

“To demonstrate my displeasure with you, President Obama, I’m going to blow my own brains out.” 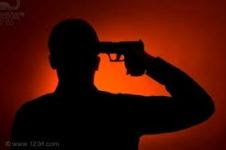 This evening we may experience yet another example of the limitless capacity of most Americans to vote down their own future.

At issue: a special election for the seat in Congress formerly held by Anthony Weiner, the loose-screw congressman who was fond of e-mailing photographs of his, umm, weiner to young women.

On the right is Tea Party radical Bob Turner who will vote with the Republican congressional roadblock to bring down the president by voting against anything Obama is for, regardless of the consequences. Against: healthcare, Medicare, Social Security, abortion, an infusion of capital into the economy or, if the issue ever comes up, washing your hands after flushing the toilet.

On the other side is a Democratic party stalwart, David Weprin, who will support Social Security, Medicare, programs to get more of us employed, infrastructure repair and improvements, better schools, and a woman’s right to decide whether or not she will bear a child.

The district, I’ve heard, is roughly two-thirds democratic. So who is projected to win?

Simple. Lots of democrats, like me, are pissed off at Obama, who has fiddled around attempting to compromise with the uncompromising right wing of Congress while the economy continues to go down in flames.

The polls show a slight lean toward Turner. To demonstrate to Mr. Obama how mad they are, the democratic district may vote today for a man who will cut their Social Security, destroy their Medicare, jerk the rug out from their school-age and college-age kids, vote to sink the economy, and force their daughters to bear the children of rapists.

That’s like the idiot kids who blow their own brain out to punish their teachers.

Morning After Report: Yep, my fellow Dems did it, last night. They pulled the trigger and blew their own brains out, voting to destroy their future and the future of the kids in order to tell off President Obama. Bob Turner Won.

Unfortunately, Linda, you also sent yourself a message. It reads, "I'm mad at Obama, so screw me!"

Mr. Turner predicted that voters elsewhere would also rebuke Mr. Obama in the elections next year.

“We have lit one candle today,” he said. “It’s going to be a bonfire pretty soon.”

Nice going, Dems. You've added one more obstreperous Republican to the ranks, one more for the President to "compromise" with.