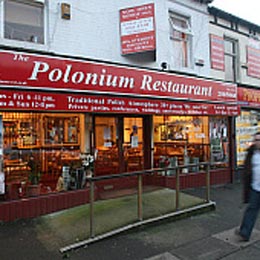 So Colonel Alexander Litvinenko, the whistle blowing Russian spy, died of Polonium poisoning after dining with his buddies in a London restaurant, and now some of his dinner companions are also poisoned.

Investigators found the poisoning came from radioactive Polonium, which somehow made it into either Litvinenko's sushi, or his cocktail, or his cigarette. Since then, Geiger counters have been going off all over London. Creepy, right?

An otherwise undistinguished restaurant hasn’t done this well on horrifying publicity since the mob rubout of Crazy Joe Gallo at Umberto’s Clam House here in New York’s Little Italy. The restaurant lived on its bad reputation for years.

There’s nothing like a slight frisson of deathly fear to enhance a meal, whether it’s fear of Polonium poisoning or of a stray mafia bullet. And the French think wine is the appetite-enhancing aperitif? Lillet is lovely, but it's no match for a dead customer.

Somehow all this brings to mind the ancient limmerick:

A diner while dining in Crewe
Found quite a large mouse in his stew;
Said the waiter, “Don’t shout and wave it about
Or the rest will be wanting one, too.”