Pervert-protecting Congressional Sex Nazis to Senior Citizens: “No sex for YOU, you doddering old geezeer!” 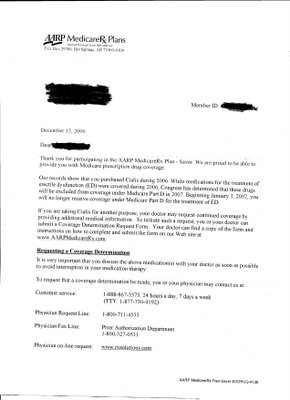 It’s as though it happened in the dead of night – and for all I know, maybe it did. Aside from an article in the St. Louis Post-Dispatch (no longer on the web) and an online publication called Senior Journal...
http://www.seniorjournal.com/NEWS/MedicareDrugCards/6-10-18-ErectileDysfunctionDrugs.htm
…the press was largely silent about it. Maybe all those young journalists thought nobody would care.

At any rate, the Crank first heard about it when I got my hands on the letter above – identifying information redacted to protect the impotent – in which AARP/United Healthcare declared that Cialis was no longer on their formulary because “Congress has determined that…” [drugs that treat erectile disfunction] “will be excluded from coverage under Medicare Part D in 2007” So that includes Levitra and Viagra, too.

WAIT A SECOND, WAIT A SECOND!
WHICH CONGRESS IS THIS?
MAYBE IT SHOULD BE CALLED
“THE SEX NAZI CONGRESS”

“No sex for you,” says this Sex Nazi Congress to erectile disfunction sufferers over 65.

Hey gang, this is the same Sex Nazi Congress that covered up for Congressman Mark Foley, who was making buggery attempts at his teen-aged male interns.
http://www.salon.com/opinion/blumenthal/2006/10/05/foley/index_np.html

It's the same Sex Nazi Congress that kowtows to the lunatic fringe of the “Christian Right.” You know, the same Sex Nazi Congress that wants to let the FCC fine television stations $325,000 per incident for profanity that gets uttered on the air in the heat of live events – from wars, to 9/11, to sporting events.
http://www.ucop.edu/irc/services/documents/guidelines.pdf
See, they don't want you to know that soldiers who are under fire or rescue worker who were watching the World Trade Center collapse and snuff out thousands of lives would actually cuss. They want to do all the cussing themselves, whenever they get caught -- almost literally -- with their pants down.

Yes, it's the Republican Sex Nazi Congress that turned a Democrat budget surplus into an eight and a half trillion-and-still-counting-national debt...
http://www.brillig.com/debt_clock/
...that also has authorized, almost without a peep of protest, half a trillion dollars poured down the toilet of two wars that we’re losing simultaneously, one in Iraq and the other in Afghanistan. (We belong in Afghanistan, but thanks to the drained resources getting flushed away Iraq, Afghanistan is rapidly drifting back to the Taliban.)

So these big spending Sex Nazis, who gave themselves eight pay raises in the last nine years...
http://www.congressproject.org/releases/paracoalletrel2001.html
...now want to block senior citizens from getting a $10 or $20 pill maybe once a week so they can have a a few happy moments of sex with their spouses in their retirement years.

These are the very same Sex Nazis who banned negotiating with drug companies for medication – something that could have lowered the cost of Vigara, Cialis and Levitra – and all medications – and made them more affordable to consumers, taxpayers and the Government. Now they say we have to "control" health care costs. How? By denying people health care.

These are the Sex Nazis who promised they’d get government off our backs. Now we’ve got it in our bedrooms.

WRITE A LETTER OF PROTEST
TO YOUR CONGRESSIONAL SEX NAZI

You’ll find his, her or it’s address here:
http://www.webcom.com/~leavitt/cong.html

Demand to know where he, she, or it stands on banning erectile disfunction drugs from medical benefit formularies. Remind him or her or it that nearly everybody gets to be 65 unless they drown in New Orleans floods while the Sex Nazis in Congress fiddle, die in Congress-supported wars – or unless the Sex Nazi Congress finally outlaws longevity.

Tell your Congressional Sex Nazis you wanted Medicare to negotiate, negotiate, negotiate damnit – for better drug prices for everyone in America. Tell them that you want ALL legitimately prescribed drugs to be covered by the so-called, confusing, donut-holed “Drug Benefit.”

And if they give you any crap about not wanting the U.S. Government to pay for quality of life medications – remind them about all the raises they gave themselves to improve their own quality of life.

WHO OR WHAT WILL FALL
VICTIM TO THEM NEXT?

What quality of life or care benefit will the Sex Nazi Congress cut for the rest of America next?

Will they eliminate wheelchairs because that improves the quality of life of paraplegics?

Will they cut oxygen for people who want their quality of life improved by being able to breathe better?

And let the Sex Nazis in Congress know that if they won’t act, they can all go to Heil.