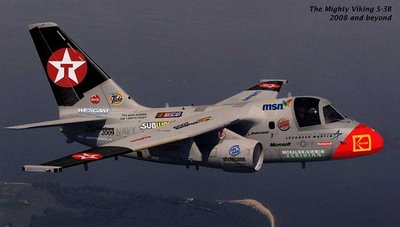 Somebody sent me this photograph about a year ago. What a great idea to help pay for the Iraq war!

You see, this is a greedy America we now occupy. In exchange for a wad of bucks shoved into some team owner’s pocket, baseball parks and football stadiums will shun stirring up any civic pride that comes from naming ball fields after their teams and cities. Instead, we’re now naming these places after voracious banks and corrupt companies.

Fortunately, the sponsored name lasts only as long as the money flows. Remember Astros Field in Houston, named after the team that actually played there? Greed and corporate egotism changed the name to Enron Field, which in turn changed, ahem, to Minute Maid Park. Want to cheer for a glass of orange juice?

One of the blessings of a nation ruled by greedy egotism (or is it egotistical greed?) is that loyalty has the approximate longevity of a container of yogurt left out in the sun. I know a university that will name a building after you in exchange for a king’s ransom. But dare to die and in two shakes of King Midas’ wand they’ll take your name off the building and replace it with the name of the next deep-pocketed donor.

So as long as America is up for sale, how about selling military ranks to corporate sponsors? Think of the tax cuts some hack politician could take credit for if, say, McDonalds starts paying for military uniforms instead of the Department of Defense.

It will take some getting used to, but army privates will hereafter be known as McNuggets. Generals, on the other hand, will be known as Big Macs. Despite protests of sexism, Army nurses will get stuck with the rank of Egg McMuffin.

In the spirit of inter-service competition, the Navy will have a different sponsor. Its former admirals will hereafter be known as Whoppers. Former ensigns will have the rank of Chicken Tenders. Chief Petty Officers will become Big Fish.

Oh, bad news for all you guys wounded in action. You can forget about a purple heart. Instead, they’re going to give you a Pepperidge Farm Puff Pastry pin.

What, you’re complaining? Whaddaya want from the government? You want fries with that?

That's actually a Navy plane. An S-3 Viking I believe.

On the topic, I think that's a remarkably poor idea, so I'll assume you were joking, hyperbolically. In a more existential vein, why do we care what a building is named after we die? Surely a legacy built of bricks and mortar is ephemeral anyway. Legacies to remember? That's what children are for.

By the way, speaking of corporate food sponsorship, are you even able to buy fries in NYC anymore? Didn't Big Brother Bloomberg outlaw that?

And pretty soon it will be a greedy Iraq that we occupy... then Iran... then Syria... then... where will it stop?

Whut? I'm not sure Velvet Cowboy's comment follows from a story about privatizing ranks, but what the hay! I'm for people speaking up, no matter what planet they're speaking on.

Any reader of Vanity Fair knows that in the British Army you used to buy your commission. We do a version of it now, when you pay for your education to get the commission. Sponsored candidates could wear sponsored jerseys. Imagine going to war under the logo of the Acme Dart Board Company.