New York and San Francisco swap weather. Astrophysicist says it’s because the universe has turned inside out.

New York (Dec. 18) - New York and San Francisco have exchanged weather patterns in what an obscure astrophysicist, working in a Greenwich Village basement laboratory, calls “a balloon or bellybutton inversion.”

Simultaneously, New Yorkers began acting increasingly laid-back. A man on a bus stood up for a pregnant woman. On the same bus, an out-of-towner dropped two dollars in nickels and dimes into the fare box and the driver said, “Thank you, man, that’s very cool.”

A few hours later, during rush hour in San Francisco, a native tired of waiting for the Van Ness bus loudly loudly muttered several unprintable epithets and stomped off downtown on foot.

While investigating this phenomenon, The New York Crank stopped for coffee at Reggio, one of the last authentic Greenwich Village Italian cafés that hasn’t been put out of business by Starbucks. In the café, located on MacDougal Street, he struck up a chat with Herschel Harshbarger, PhD., who described himself as a freelance astrophysicist. Harshbarger, it turned out, has a theory about what’s going on. The universe, he declared, has turned inside out.

BALLOONS, INSIDE-OUTEDNESS
AND A LOT OF BROW-FURROWING MATH

The New York Crank replied, “I don’t get it,” whereupon Harshbarger whipped a small yellow balloon out of his pocket. He lay the balloon on the marble table next to his cappuccino, with the mouth of the balloon pointed left.

“It’s a matter of topology,” he said. Harshbarger explained that topology is a study of the geometry of the surface of changing shapes, which didn’t seem to help explain anything, but he kept on explaining.

“If we can assume that Earth is part of the topological skin of the balloon, then everything on earth has been reversed. This explains why New York and San Francisco have exchanged climates,” he said.

Ever-alert, The New York Crank asked whether this “topological inversion” as Harshbarger called it justified the Lunatic Conservative movement’s insistence that pollution and the loss of rain forests are not causing climatic change.

“On the contrary,” Harshbarger insisted, “it is entirely possible that heat rising from formerly forested areas, plus the growing emission of greenhouse gasses have distorted the balloon, thus causing the inversion.”

“It’s as if you were made so sick by pollution that you turned inside-out from the locus of your bellybutton,” Harshbarger said.

BUT THERE’S REASON
FOR OPTIMISM, TOO

According to Harshbarger, there is currently so much temperature fluctuation on earth that the topological surface of the universe is in flux, rather like a balloon that expands, contracts and changes shape as the air inside it is heated and expands, then cools and causes deflation.

“Things look very hot in New York today,” Harshbarger said, “but they could cool down tomorrow, just as San Francisco chills out by heating up.” 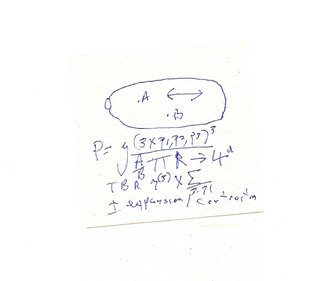 Harshbarger did some elaborate computations on the back of a napkin (adjacent to text) that he said, “confirm the fluxness of the situation in a topological sense.”

Bystanders, some of whom seemed to have stopped by from the nearby Institute of Mathematics at New York University, seemed impressed.

“That’s the most extraordinary napkin I’ve seen in years,” one of them said.