Seven Dwarfs or are they U.S. Supreme Court Justices? You decide. 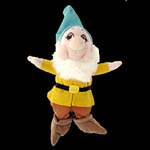 I only raise this issue because a recent poll by Zogby, the public opinion firm, “found 77 percent of U.S. residents could name two of Snow White's dwarfs, whereas only 24 percent could name two Supreme Court justices.” http://www.sciencedaily.com/upi/?feed=Quirks&article=UPI-1-20060814-19023200-bc-us-popculture.xml

Wait a second, just wait a second! Maybe this country isn’t so dumb after all.

Last night, perhaps as an act of depraved masochism, I was listening to a C-span broadcast of the U.S. Supreme Court proceedings concerning Parents v. Seattle and Meredith v. Jefferson. Both cases have to do with school integration and racial discrimination.

My friends, there were distinct parallels between some of the justices and some of the dwarfs.

Take justice Clarence Thomas. During the spirited Q&A back-and-forth between the justices and the various lawyers representing parents, school districts, and George Bush’s administration (You’d think George would have better things to worry about, like Iraq, but no!) I heard not a peep out of Mr. Justice Thomas.

Now admittedly, I didn’t sit through the whole thing. I didn’t even come in at the very beginning. So it is possible that Clarence cleared his throat at some time during the proceedings. But not to my knowledge.

So why was there not a word from Thomas, who during his confirmation hearing raised the issue of “lynching” to describe descriptions of alleged sexual misbehavior on his part? Surely, you’d think he’s interested in race-related matters.

Unless he was SLEEPY and nodded off. Or DOPEY and didn’t want to sound dumb by asking a dumb question. Or maybe he was just too BASHFUL, a sad state of affairs for a U.S. Supreme Court Justice.

I was surprised how remarkably nasal Justice Ruth Bader Ginsberg sounded. Perhaps she was a bit SNEEZY and keeping it in with a handkerchief and nasal spray. Because the court proceedings are recorded for broadast, but not recorded on camera, we may never know.

To my surprise, Justice David Souter sounded rather GRUMPY in some verbal dueling with some of the lawyers. Too bad, since I happen to like the way he has come down on most decisions.

I have two nominations for HAPPY, Justices Samuel Alito and John Roberts. Why shouldn’t they be? They fudged, hedged, and stealthed their way into their seats, although one suspects they could have achieved even these feats only in a Republican Congress. Since we no longer have one, they got into office just in time.

Oh listen, I’m not going any further with this. Offer your own nominations. If they’re printable, I’ll post ‘em.

Meanwhile, be of good cheer. Whistle while you work.

At a lecture for lawyers last fall I said

"Thomas is not as dumb people say he is."

I heard grunts of approval.

My mind is wandering now, as old guys' will. There is a famous Kentucky case (Bedinger v Greybill's admr.) where H held property under a will "to H for life, remainder to his children." He had no kids--so he adopted his wife.

Leach wrote (to the tune of "On Top of Old Smoky"):

Oh father, oh father, let go of my blouse,
Since I am your daughter, I can't be your spouse...