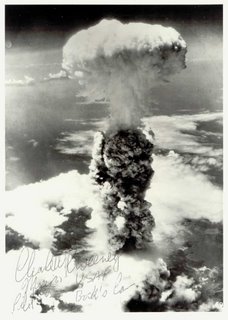 I came back from Europe last August complaining bitterly that wary airport security officials in Frankfurt made me squirt my own prescription nasal spray up my nose. They wanted to, uh, “confirm” that it wasn't explosive.
http://thenewyorkcrank.blogspot.com/
2006_08_01_thenewyorkcrank_archive.html

Then it turned out that Colonel Alexander Litvinenko, the former Russian spy who most probably was poisoned by henchmen of Russian head honcho Vladimir Putin, was done in by radioactive Polonium – not by Thalium, as originally suspected and as I reported. See “the lunatic who came in from the soup” here:
http://thenewyorkcrank.blogspot.com/2006/11/curious-cases-of-poisoned-russian-spy.html

Most recently, traces of radioactive Polonium 210 have been found on at least two British Airways jets.

Well dudes, that’s the life-or-death question. While airport security folks are busy sniffing shoes for plastique and examining 1 ounce nasal spray bottles for teensy-weensy explosives, some diabolical genius could walk aboard an airplane with a nuclear device, detonate it over London or New York, and turn all of us into radioactive cinders.

I don’t want to belittle the damage that an ounce of nasal spray could do in the right hands. I mean, it could paralyze sinuses from here to Kirkuk.

But for goodness sakes, do you mean to tell me that after all this time since 9/11, they still don’t have Geiger counters passively screening passengers as they walk through airport security – not to mention Geiger counters screening checked luggage?

Oh, sorry, I forgot. We only screen for whatever happened last week.

Well, folks, that’s how the bad guys are gonna get us. Not by smuggling in things we’re looking for. They’re going to get us with what we don’t bother looking for because it’s too much trouble or too expensive. Or because our security people are too lazy to think of it.

Speaking of which, there's a program in the works to give business travelers who pay $100 an “easy pass” to avoid airport security. Nice idea – on the surface.
http://www.usnews.com/usnews/news/articles/061119/27traveler.htm

But what’s to stop an Alchaida bellhop in London from slipping a small nuclear something-or-other into the traveling patsy’s bag, which will then speed through security unexamined, it's telephone-activated trigger cocked?

Thanks to the Polonium flub-a-dub, we now all know there's evidently nothing to stop nuclear luggage. The privileged passenger turns into an A-bomb bomb delivery system. Or at least a dirty bomb delivery system that could poison half the citizens of any good sized city. Are we going to wait until it happens before we install airport geiger counters and repeal these stupid "easy passes." My guess is...

Probably we also ought to stop "randomly selecting" 80 year old white grandmothers for intense screening too. Something tells me you aren't going to be completely on board with the idea of profiling, but it's like in medicine: we have a finite amount of resources, so it is best to use them on a preselected population. For instance, we don't routinely order mammograms on males. We also don't routinely order colonoscopies on 18 year olds with diarrhea. We make exceptions based on the history and presentation of the patient. Similarly, in airport security, we ought not be selecting random passengers for extra checks. We should be looking at the 20 year old passengers named Ahmed with one-way tickets. And if an 80-year old grandmother is chanting to herself, hiding a box cutter in her carry-on, or trying to set her shoes on fire, she should be singled out as well. The nervousness Americans feel about using personal identifying characteristics to target people needs to stop. Someone flying a gang's colors attracts police attention because gangs contribute significantly to violence. Similarly, someone who has characteristics suggestive of being an Islamic fundamentalist should attract attention. As far as Russian assassins go, I'm sure there are identifying characteristics we could be looking for there too.

As a side note, until airports start using them you can buy your own Geiger counter here:
http://www.blackcatsystems.com/GM/geiger_counter.html

It even plugs into a laptop via a USB port. Brave new world, eh?

Thank you for your comments, which I am delighted to publish. Your statements are always well thought out and well written.

I do have one small complaint with your statement that, "Something tells me you aren't going to be completely on board with the idea of profiling..."

You can tell your "something" that it's only partially right. I do support some profiling. I mean, I may be a liberal, but I'm not a moron.

Yes, profile those people most likely to kill somebody with malice aforethought. But also search those white collar white guys (like me) from time to time. Nobody asked me who packed my bag on any of the last six flights I took. (It happens to have been me; but it would have been nice if they asked whether I knew what was in my check-on luggage, rather than focusing on that itty bitty bottle of Rx nasal steroids.)

P.S. I am not -- repeat not -- in favor of racially profiling Americans who might have a little weed stashed in the trunks of their cars. Profile people to save lives, not to build arrest records.