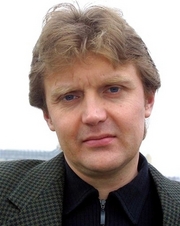 So perhaps you’ve been reading about former Russian spy and critic of the current Moscow regime, Colonel Alexander Litvinenko (picture at right), who was poisoned with a deadly chemical called thallium in London.

As I write this, Litvinenko is in an intensive care unit with a 50-50 chance of survival. If you’re not up on the story, go here: http://news.yahoo.com/s/ap/20061120/ap_on_re_eu/britain_russian_spy

The news reports bring to mind a woman I met outside the United Nations building years ago – while the late premier of the USSR, Nikita Khrushchev, was inside scandalizing the planet by taking off one of his shoes and disruptively banging it on a desk in front of the world’s diplomats.

A GREAT YEAR FOR CRAZY STUFF

This was in October of 1960. It was a very good year for nutty things to happen – from shoe banging to Fidel Castro slaughtering his own chickens in a Harlem hotel – and I was on top of the nutcase situation when I met Sylvia Krause.

I was a reporter at the time for one of New York’s daily newspapers. Sylvia Krause was an antiques dealer. The first time I saw her she was walking around in one of the pens made of saw horses, erected across the street from the UN by cops trying to control the insanity. The various pens were spaces reserved for legitimate protestors and for severe nut cases. You name it and they had it penned up:

There was a man dressed in a bear costume, goose-stepping. There were angry survivors of the Soviet-induced famine in the Ukraine back in 1932-33. There were enraged Hungarians. There were anti-Castro Cubans. And then there was Sylvia Krause.

“Are you talking about Franklin Delano Roosevelt?” I asked her.

“Oh yes,” she said, “and they didn’t stop with Roosevelt.” She ticked off a list of more than a dozen celebrities from the world of politics and the movies whom the Kremlin had bumped off with poison.

“Why movie people?” I asked.

“Because they were anti-Communist,” Sylvia replied.

What immediately struck me was that, like Roosevelt, all of the “victims” had been reported dead of natural causes when their obituaries appeared in the newspapers.

“How do you know they were poisoned?” I asked.

THE SECRET AGENTS IN YOUR SOUP

“The Russians have secret agents working as waiters all over the world,” Krause explained, “and when someone they want to kill comes in for lunch, they put poison in their soup. That’s how they got…” and she listed the names of half a dozen more deceased celebrities.

“But how do you know this for a fact?” I asked.

Because they tried to poison ME!” she said.

“Then how come you’re not dead?”

“Because I realized they had poisoned my soup, and right there in the restaurant, I stuck my finger down my throat and threw up.”

I loved the imagery, so I wrote a short feature story about her. In those days, stories were typed on actual paper rather than into a computer. Next they were carried by a “copy boy” to the desk of a city editor, who edited them with a fat lead pencil. Unwanted stories ended up “spiked” – literally impaled on a brass spike that sat atop the city editor’s desk.

I watched forlornly as, across the city room, my Sylvia Krause story got spiked faster than a secret agent can say “thallium bromium arsenic chromium.”

Sylvia Kruase operated her antiques business, The Carriage Antique Shop, in a townhouse on East 70th Street near Lexington Avenue. In the course of poking around for information, I learned that she had been leafleting students at nearby Hunter College concerning those poisonous secret Soviet agents. Evidently, many of the students had encountered her and were fond of coming into her shop between classes just to torment her.

A few years later, I wandered past her shop again. There were no longer any antiques in her shop window. The window contained only a spotlight shining down on a photograph of the late President John F. Kennedy. Seems that Sylvia learned the Soviets had poisoned JFK's soup, too. The grassy knoll, Texas Book Depository and Lee Harvey Oswald? Those were just fabrications to throw you off the track, Sylvia explained.

As you might expect, an antiques dealer who spends her time tracking down Russian poisonings rather than displaying, buying and selling antiques is doomed to financial failure. She went out of business soon after. Way out of business.

OUR TALE ENDS NOT ONLY SADLY—
BUT ALSO WITH A SHUDDER

In 1970 I came across her again, grimy and a bit ragged looking, at the base of a flight of steps at the Seventh Avenue entrance of Pennsylvania Station in New York. She was begging for coins, shaking a bent and filthy Styrofoam cup, but still displaying a sign – this one written in crayon on a piece of corrugated coardboard – denouncing Soviet poisonings. By then, she appeared to be about 50.

I never saw her after that. I doubt that she is still alive. Even if her life had remained comfortable, she’d most probably be in her late 90s by now. I assume that she died somewhere on the street and was buried at the potter’s field on Hart’s Island, where the city rids itself of the remains of its homeless.

But now there’s the case of Col. Alexander Litvinenko, evidently poisoned in a London restaurant. And the hair stands up on the back of my neck.

I mean, you just have to wonder: did Sylvia Krause really know something after all?