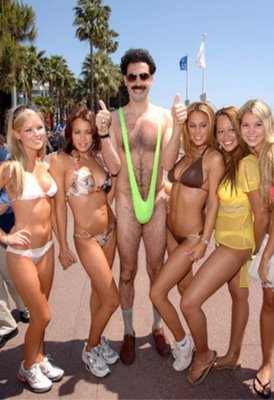 Boy, you might have known it. The Conservative faction of Op-Ed Alley at the New York Times has taken up arms against the movie “Borat.”

Both John Tierny –sometimes a dead spot-on columnist and sometimes a dead-wrong one – and David Brooks – a conservative pundit who rarely manages to write engagingly about anything or anybody – have attacked Borat.

I guess that since the Republican Party fell into a poo-pot of their own making on Election Day, neither of these guys wants to natter on about the political situation when they can pick on a cheaply-made comic movie instead.

In case you’ve just arrived here from a long journey in outer space, let me explain that the movie Borat, (full name: “Borat: Cultural Learnings of America for Make Benefit Glorious Nation of Kazakhstan”) is one of those split-your-sides-and-roll-in-the-aisles films that come along perhaps once a generation. The last one that I can remember before Borat was Animal House, and before that the very first Pink Panther movie.

The premise is that a rustic boob from a backward republic comes to America to make a documentary film about life here. The Borat character is such an obvious sendup that only a fool would take him seriously. Among the fools who did (beside Tierney and Brooks) were the people who run Kazakhstan. They were so upset that they went to considerable expense airing a TV spot for several weeks in America, to, uhh, correct the negative impressions of Kazakhstan that might gain currency when the Borat movie opened.

The two sentences of spoken information on the sound track inform us with a grandiose phrase, “Kazakhstan, the heart of Eurasia,” (So what is Turkey, chopped liver?) and an enigmatic question, “Kazakhstan – ever wondered?” No, not really. And why should this TV spot correct your negative impression?
http://www.youtube.com/watch?v=HPv_T8B4R4M

Back at the Times, you’d think the outraged conservative op-ediots would at least come to the defense of poor beleagued Kazakhstan. But no. These guys want to fry Borat in oil – or at least the alter ego that created him, Sacha Baron Cohen. Cohen’s unforgivable crime? Poking fun at the Americans he films in his travels.

Tierney at least touched on a valid point: To make fun of his subjects, the Borat character takes cruel advantage of their sometimes good-natured gullibility. This does create some laughs that are a bit on the edgy side, although Cohen makes almost as much fun of himself – in scenes that range from Borat in a ridiculously revealing bathing suit to Borat and his hairy manager in a nude wrestling match.

However, both Tierney and Brooks seem to be fuming – Brooks more expansively so – at what they evidently see as a form of liberal “snobbism” behind the movie.

EXPENSIVE IRE – FOR A CHEAP SHOT AT LIBERALS

I would list a URL for you here but sad to say, access to both columns is by special New York Times for-pay subscription only. You have to shell out to read these cheap shots at comedy on line. Personally, I consider this either a desperate attempt by the Times to make these columnists earn their keep, or an equally desperate attempt to hide them from view as much as possible.

Brooks is self-righteously irate. If I read the gassy bubbles in his boiling ire correctly, he’s upset that yet another effete intellectual snob (an English one at that) has made fun of stock objects of heartland ridicule such as a gun dealer and drunken frat boys.

But wait! Borat asks the gun dealer which weapon he should buy to “kill Jews” and the gun dealer helpfully points to the proper weapon for blowing somebody’s head off. Why isn’t Brooks irate at the gun dealer for not responding to this request by hurriedly calling the cops and saying, “Hey, I might have a psychopathic murderer in my store and he’s trying to buy a lethal weapon.” Isn’t a guy who would enable a cold-blooded murderer worthy of at least some ridicule? The nerve of that movie to make fun of somebody who’d help you blow the head off a perfect stranger!

Borat’s depiction of the frat boys – who come across as two foul, drunken slobs – also ignited Brooks’ fury because they are the kinds of stock characters Brooks has been hearing about all his life. Maybe Brooks has watched Animal House so many times that the entire topic of frat house swine bores him. But unlike Animal House, these frat boys are authentically swine-like, not some fictional caricatures cooked up by a bunch of Lampoon writers.

The frat boys are now suing Cohen. They claim the racist and sexist remarks they made were spoken with the understanding that the film would only be shown outside of the United States. Evidently, they seem to think it’s perfectly fine to spew racism and sexism around the rest of the world.

They also claim that before the cameras rolled they were taken to a bar and given booze by the film crew. Oh, those poor 250 lbs.-or-so babies! Did all those effete intellectual snobs stick a gun in your ear and force you to down jello-shots? If not, where’s the beef, other than on your fat heads?

The lawsuit claims, “The film ‘made plaintiffs the object of ridicule, humiliation, mental anguish and emotional and physical distress, loss of reputation, goodwill and standing in the community.’”

All of which those two prejudiced porkers seem roundly to deserve.

There are several other examples of pure red blooded American bigotry in the film, but if you haven’t witnessed them yet, I won’t spoil things by telling you more about them.

Instead, I’ll end with some positive news. Tierney’s op-ed column is about to become history. Instead, he will move to the Science Times pages, writing on science subjects. For a writer who has enjoyed the kind of exposure and unfettered range of subject matter that Tierney once had in Op-Ed, thi smust be the equivalent of deportation to Kazakhstan.

As for David Brooks – maybe he should take a real journalist’s tour of Kazakhstan and report back on what life there is really like. That might lead to a Brooks column that actually offers some interesting content.