What has the dunce in the White House learned from the spanking voters just gave him? Nothing, nothing, nada, zilch, zip! 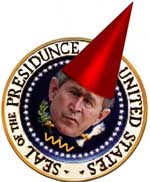 A dunce is a dunce.

Yeah, Rumsfeld’s history. But the W and his merry band of Bushniks seem to think that all they need to do is change a face in the cabinet and everything will get all better again.

Substantial changes? Forget about it. These guys plan to shuck and jive ‘till the cows come home to avoid changing anything they’ve always been doing. Consider how they're trampling on the Bill of Rights -- the sort of thing we're supposed to be fighting for.

The Associated Press reports: “The Bush administration said Monday that Guantanamo Bay prisoners have no right to challenge their detentions in civilian courts and that lawsuits by hundreds of detainees should be dismissed.

“In court documents filed with the U.S. Court of Appeals for the District of Columbia Circuit, the Justice Department defended the military's authority to arrest people oversees and detain them indefinitely without access to courts.”
http://news.yahoo.com/s/ap/20061113/ap_on_go_ca_st_pe/detainees_lawsuits

Speaking of the Associated Press, one of their photographers has been locked up for – well, there’s open suspicion it’s for doing his job as a combat photographer, although the Pentagon claims otherwise.

Says the American Journalism Review, “The U.S. says Bilal Hussein has links to terrorists. The outraged AP implores the Pentagon to charge him or free him.”

Oh yes, a small matter: The photographer is a Pulitzer Prize winner.
http://www.ajr.org/Article.asp?id=4227

The military had three secret meetings about the photographer, but refused to tell him specifically what he's charged with. He’s been behind bars for over seven months.

Meanwhile, the Chicago Tribune reports that while the Bush administration says it’s willing to take a “fresh” look at Iraq it’s not fresh enough to change the administration’s “policy” of “achieving success there” – whatever the hell that means.

It seems to mean they’re not leaving until the Iraqi government announces it can defend itself – which that government is not going to do as long as we’re determined to stay “as long as it takes.”

Stick with the Bush policy and 50 years from now it’ll all be the same. We’ll still be mired down in Iraq. American lives will still be getting wasted needlessly. The lights and tap water from Kirkuk to Bagdad still won’t work. The Bushniks ain’t changing nuttin’ if they can help it.
http://www.chicagotribune.com/news/nationworld/chi-0611130206nov13,1,5460141.story?coll=chi-newsnationworld-hed

Looks like the spanking administered by American voters has done nothing to improve our nation’s World Class Dunce.

See, all those child psychology people who say spanking doesn’t work are right.