$5 Fortune Teller Predicts Election Outcome. And The Winners Are… 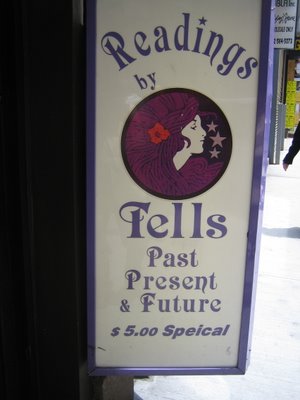 Fortunately, just down the gritty block from our own rodent-infested office, and up a flight of none-too-pristine stairs, we have a local oracle. She prefers not to advertise her name, even on her street sign, so let’s just call her Madame Galzogarist. She offers what she calls (see photograph of sign, above) a “$5 Speical.”

It’s always a bit risky to ask a fortune-teller to see into the future when she can’t even see into a dictionary for the correct spelling of “special.” But in an election year, any prediction is better than no prediction.

HERE’S THE TRANSCRIPT
OF OUR REVEALING SÉANCE

MME. G: You want a special? Or you want the spe-i-cal?

NY CRANK: Can you explain the difference?

NY CRANK: Can you predict who's going to win the next election?

NY CRANK: If you call this one correctly, we might have more work for you.

MME. G: Okay, ask me something.

NY CRANK: Hold on a second. Do you have any experience predicting political outcomes?

MME. G: You bet. I have lots of famous clients.

MME G: Defense Secretary Donald Rumsfeld. I’m the one who predicted to him that the Iraqis would greet our troops with roses.

MME G: So what? You never heard of a rosy prediction? Even the CIA and Condi Rice use me.

NY CRANK: For what?

MME G: Who do you think told them about all those weapons of mass destruction in Iraq? Did I mention Dick Cheney? I tell him everything he knows.

NY CRANK: I’m a little nervous about the accuracy of your predictions. What’s your margin of error?

MME G: Plus or minus 97 percent, just as good as the White House. You got a prediction you want for your five bucks or not?

NY CRANK: Okay. First of all, who’s going to win the elections?

MME. G: You askin’ about this district by election district, or in a general sort of way? Because if you want a precinct breakdown, it’s gonna cost you a lot more than five bucks. You got fifty?

NY CRANK: Sorry, we aren’t budgeted for that. In a general sort of way, who’s going to win? Republicans or Democrats?

MME. G: Hmm, let me concentrate on my crystal ball. I see a Democrat sweep, but with a malfunctioning broom.

NY CRANK: What does that mean?

NY CRANK: Yes but what do you mean by a malfunctioning broom?

MME. G: I mean Democrats may be right on political issues, but they’ve got a gaffe problem. I mean, tell John Kerry to keep his day job and forget about doing stand-up comedy. Somebody should duct tape his mouth until the elections are over. I mean, tell Howard Dean not to do his whooping cowboy impression any more. He shouted "Eeeyah!" once and we got stuck with John Kerry as a waffling candidate and then four more years of Bush. I mean, in New York, tell Alan Hevesi that the next time his wife wants to go somewhere, hail a cab or call a lobbyist to send a limousine instead of using a a state-chauffeured car. If he’s going to steal, at least steal like a Republican.

NY CRANK: Don’t you think Republicans are guilty of some gaffes, too?

MME G: You mean like Republican Senator George Macaca Allen’s racial slurs? Or are you talkin’ about the fact that the Prez of the U.S. can’t even pronounce “nuclear?” Yeah, Macaca Allen is probably toast. But Kerry’s safe for now because he’s not up for re-election. Goes to show you: It’s not what you say, it’s when you say it.

MME. G: His former Congressional district right now is as hot as a Republican trolling for sex in a public latrine at midnight. I’d say Republicans can kiss his seat goodbye, if you know what I mean.

NY CRANK: Will the Republican attempt to cover up the Foley scandal have any fallout?

MME. G: Yeah. It'll allow evangelicals to decide whether they want to vote to get us out of the Bush mess in Iraq or vote in favor of more hypocrisy.

NY CRANK: Which way will they go?

MME G: You’re askin’ a helluva a lot for five bucks, but if I were you I’d put my money on hypocrisy.

NY CRANK: I notice campaign advertising is getting dirtier and dirtier. Who will the slime hurt most?

MME. G: Listen, kid, throwing slime is as American as apple pie. That’s why politicians are right up there in the public esteem with used car salesmen and matrimonial lawyers.

NY CRANK: But will the Democrats get hurt more than the Republicans or…

MME G: Nah, at the price you’re paying me, that’s all the predictions you get.

NY CRANK: You mean, you’re not telling me any more?

MME G: Come back any time. But as the Republican candidate said to the lobbyist, be sure to bring lots of money.