Obama seems to be losing his grip on the newest generation of voters. But they’re committing protest by economic suicide. 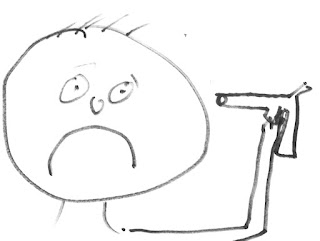 The kids, recently out of high school or just out of college, at best feel ambivalent to the President, and some feel worse toward Obama than that. They’re leaning either undecided or Republican – an alarmingly far cry from the youthful enthusiasm four years ago that help sweep Obama into office.

Who can blame them? So many are unable to find work, see a grim future for themselves, and emerge at voting age bereft of delivery on a bucketful of Obama’s election campaign promises.

Well, I blame them, not that they don’t have a point, or a quiver full of points. One letter to the Time from Dave K of Cleveland, Ohio, that is appended to the New York Times article sums up the indictment of young voters:

As one of the younger voters who has been disappointed with Obama, let me give you an idea as to what candidate Obama promised that president Obama hasn't come even remotely close to doing:      - Close Gitmo and give those imprisoned there a fair trial (or release them).      - End large no-bid contracts. He didn't even need Congress for this.      - Increase taxes on those making over $250K a year, including eliminating the payroll tax cap and increasing top-bracket capital gains taxes.      - Increase the minimum wage to $9.50.      - Work with the states to give same-sex couples the same rights as opposite-sex couples.      - Make polluting companies pay for cleaning up their mess.      - A public option for health care.      - End the wars in Iraq and Afghanistan.
Iraq is kinda over, but with several thousand troops still there. Afghanistan is no closer to ending than it was 10 years ago.  That's why I'm strongly considering voting for Jill Stein (Green Party) this year. Not because I want Mitt Romney, but because for many of the things I care about Obama has done exactly what I'd expect Mitt Romney to do.               Obama's strategy, pulled straight from the Clinton playbook, is to just flat out ignore the liberal wing of his party assuming they'll just hold their nose and vote for the Democrats as the lesser-of-two-evils. Well, I'm not playing that game.

While David's bitterness is not without merit, some of the campaign promises sailed far out of Obama’s political reach after the first two years. More gravely, David also represents a line of thinking that would make matters so much worse if Romney wins or the Senate turns Republican that I shudder to contemplate them. I’m talking about matters such as:

-  Killing off unions that fight to establish reasonable standards for working conditions, pay and benefits. Not to mention the only significant funding there is to put up against the Republican money machine that in effect buys legislative votes for right wing purposes.

-       Making health care a “privilege” which only the privileged rich will be able to afford.

The list goes on, but I’m certain you get the idea.

Obama bears some blame for allowing these dangers to come so close. He rejected the advice of economists like Paul Krugman who told him his job stimulus bill and budget were too puny to do the job. He kow-towed to Republicans, in effect, as the papers put it a few years ago, “negotiating with himself.”

Instead of drawing a line in the sand and telling Republicans and a few recalcitrant Democrats, “step over this and I’ll gut you politically,”Obama compromised, and then compromised many of the compromises with Republicans who clearly were out to make him fail.

Nevertheless, and at the risk of repeating myself, if voters, most especially including the youngest voters, fail to support Obama and the Democratic Party, a nightmare future is lurking just over the hill we’ll arrive at on election day.

My cranky advice: Hold your nose. Vote for Obama and for every Democrat on the ticket, and then make the President’s political life utterly miserable if he shilly-shallies on delivering on last election’s promises as well as this election’s promises.

Occupy the White House and Congress if necessary. But first vote in the November for the only President and for a Democratic congress that is likelier to listen to you.

Cross-posted at No More Mr. Niceblog
Posted by The New York Crank at 10:58 AM