“Frack you!” Republican Governor John Kasich tells a tiny village in his state. ­ It’s a David and Goliath story in the making. 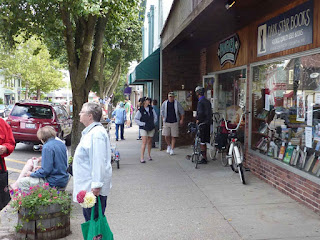 With under 4,000 people, give or take a few, little Yellow Springs, Ohio (that’s its two-blocks-long main street in the photograph) wouldn’t seem to have much clout in Columbus, the state capitol. Or even in Xenia, the seat of Greene County, where Yellow Springs – which inevitably votes with Democrats and other progressives – is surrounded by hostile Republicans.

But hey, this is a little town with a lot of quirkiness, as I’ve reported before, and a hell of a lot of gumption and stubbornness.

And they’re concerned. Oil company interests, hellbent on fracking Ohio into little pieces, are moving into the area. We’re talking about the possibility that natural gas, or at least the brine-y, chemical laden water used in underground fracking, could poison the soil and the porous limestone under it in and around Yellow Springs. That’s important because rainwater percolates through that limestone into the wells that supply the drinking water for Yellow Springs.

So, before the frackmeiseters could get to town and drill-baby-dr…I mean frack-baby-frack…the village passed a resolution asking the state to put a moratorium on fracking.  What was the response of Ohio Governor John Kasich, a greed-based Republican and (why am I not surprised?) former Fox News Commentator?

Well I can only imagine it was something like this: “Geraldine, would you please come into my office for a moment honey, and take this resolution from Yellow Springs, and flush it down the toilet?”

As for Kasich’s actual response to Yellow Springs, it was, according to the weekly Yellow Springs News, nothing but silence. Hell, a village in his state called on him to do something. Why should he give them so much as the courtesy of a reply?

You’d think the Republicans, who wail and moan incessantly that big government is bad and that power ought to be returned to local government…you’d think they would let little villages like Yellow Springs determine for themselves whether they want fracking in and adjacent to their town limits. No way, bub. Recent state law preempts them. Guess what party dominates the state’s lawmaking bodies? (Hint: Republican House Speaker John Boehner is from Ohio.)

But the folks in Yellow Springs aren’t giving up. They’re a determined lot. The town’s newspaper reports that a drilling awareness group organizer said, “It’s important to establish that we have a right to be in charge of our own health and welfare.”

That sounds as if it could almost be a Republican opinion. Unless, of course, some friend or contributor to Republican causes could make a buck by making sure people have no control over their own health.

How big will the frackfight get?

• Will Yellow Springs and several other Ohio municipalities that had their anti-fracking laws squashed by the state join together and fight this fracking sucker in court?

• Will the case get up to the U.S. Supreme Court?

• Will the court decide that big government is bad unless it’s Republican and give the finger to Ohioans who don’t want to be poisoned through their faucets?

• Or will there be another Roberts surprise?

But I’m getting years ahead of myself. The story is just beginning to percolate up, even as oil companies prepare to percolate poison down into the local drinking water. Go read the account, here. I’d say this David and Goliath story is worthy of attention from the national news media. Or of a Hollywood movie starring some spiritual successor to Jimmy Stewart.

But what the hell do I know?
Posted by The New York Crank at 4:49 PM

Wonder how large a percentage change of people voting against their best interests will occur next election? (h/t Thomas Frank)

this could get entertaining. I wonder though why we haven't seen more about this in the msm? Oh, right they're republicans also.

Government is always right when its republican. Republicans know best so the good folks can jsut get used to drinking all those chemicals. I wonder how much the govenor got from the oil companies for his caimpaign.