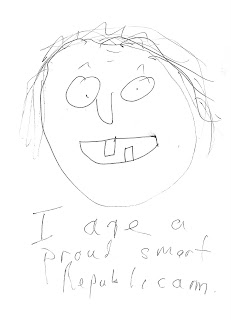 Yes, nominate Sarah, who once revealed to Katie Couric that she doesn’t know the name of a single newspaper, probably because she has never read one.

Followed by a hysterical fit "eliminationism", implying that the entirety of a political outlook is "finished". That's quite the fantasy endloesung.

Okay. I'll take that as a serious presentation of philosophical ideas and weltanschauung, 'n stuff.

For those who are not as well educated as Joe, who I suspect is somebody I like, even if he happens to be a regular contributor to a certain right wing blog, allow me to help out among any of the unlettered masses who may have read his tongue-in-cheek screed.

"Endloesung" is the final solution, as in Mr. A. Hitler's "final solution" to the Jewish "problem" – the problem being that Jews existed.

Weltanschauung is a bit more difficult to translate with formidable precision, but essentially it's an overarching world view, sometimes with a particular slant on things.

So okay, Joe, how come if you're so smart you're still such a conservative?

Don't answer that, Joe. It was a rhetorical question.