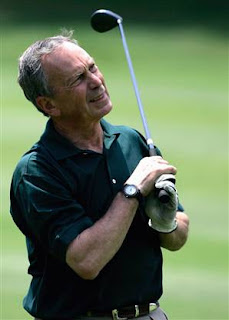 Late in June, I crankily noted that Mayor Bloomberg’s supporters say he rides the subway to work every morning. But I had my doubts. I wrote on this blog:

Some of his supporters will rush to tell you he rides the subway himself. Yeah? How often? And at what time of day?

I get on at Lexington and 77th Street, same place as Bloomberg would get on if he takes the subway to City Hall from the station closest to his multi-million dollar private mansion. Funny, I never seen him on the platform. Not ever.

Hey fellow Lexington Avenue Line riders, how often have YOU seen Bloomberg on the subway? (I used to see the late former Mayor Abe Beame on the subway about once every month. He also boarded at Lexington and 77th and he was indeed a regular mass transit rider. Moreover, he was even shorter than Michael Bloomberg, which is saying something.

So it’s not hard to believe that if Bloomberg rides the subway to work at rush hour, people would spot him there.) But finding Bloomberg on the subway at rush hour is about as likely as running into the tooth fairy.

Well guess what, folks. A team of New York Times reporters staked out the mayor’s mansion – not the official residence, which he shuns sleeping in, but his own private mansion on East 79th Street.) Were they inspired by The New York Crank? I dunno. But guess what?

• Even when he commutes by subway, he gets driven via SUV to the subway.

• He not only gets driven in a high fuel consumption SUV, but another SUV always accompanies his own SUV. That’s two SUVs to get the billionaire Mayor’s hind end to a subway

• He doesn’t even go to the subway station closest to his personal mansion – the same station I use – which may explain why I’ve never seen him there. Instead, he gets driven more than a mile to a less crowded subway station where he can catch a faster train.

All of which makes him as much of a typical commuter as I am free of cranky moods and loathing for this mayoral phony.

This is the man who piously tells us to stay out of cars to reduce traffic and pollution in New York.

He sanctimoniously tells us that an $8 charge for driving south of 86th Street will decrease congestion – which it will, for himself and his co-billionaire friends in their own SUVs, for whom $8 means less than eight cents to you and me.

Meanwhile, those New Yorkers who can’t afford a chauffeur-driven ride to the subway and an $8 tax for accepting it, sweat it out in the real commuting world.

I’d be willing to hazard a cranky guess at several secret Bloombergian motives:

1. Despite his protestations to the contrary, it is evident that Michael Bloomberg is considering a run for the Presidency as a third party candidate – sort of a Ralph Nader spoiler with a few billion extra bucks in his pants pocket to blow on screwing up the election and throwing it to a Republican successor.

2. Here in New York, his school reorganization, despite Mayor Bloomberg's own advertising to the contrary, isn’t achieving much of anything. To claim he did something important, he’s grabbing at straws, like an $8 daily automobile use tax. (Disclosure of sorts: I do not own an automobile. You’d have to be crazy in this town just to pay the garage rental of $600 a month and up, not counting existing taxes and New York automobile insurance rates.)

3. Mayor Bloomberg is after the half billion bucks the Federal government will award the city if he enacts his plan, no matter how ill-advised the plan is or how much damage it does to the middle class. He may need the dough – plus the revenues his daily automobile use tax will generate – to balance his budget, since he doesn't plan on kicking in any of his own personal loot. Please remember: I dunno this for sure. I’m only speculating

4. With a daily tax on people who need to drive below 86th Street plus the half billion of federal greenback largesse for enacting the plan, watch him declare if he runs for President that he never raised taxes. Even though the $8 fee is a tax on every person who buys something delivered below 86th Street, or who pays for services below 86th Street.

So what can I say to Mayor Bloomberg? Only one thing:

Or read the whole Times article here:
(Sorry, you'll have to copy and paste this one into your browser)

http://www.nytimes.com/pages/nyregion/index.html?adxnnl=1&adxnnlx=1185998905-VjnVbYs/wuBPxJzjlIcWng
Posted by The New York Crank at 4:28 PM