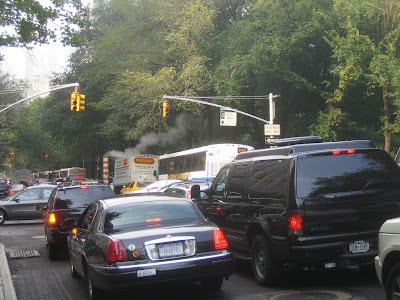 I woke up at 5 AM this morning to the sounds of thunder and a loud tattoo of rain on the air conditioner outside my bedroom window.

By the time I got downstairs to breakfast, CNN was reporting that most of the West Side subways were suffering severe delays or had come to a dead stop due to flooding. Yeah, flooding. The City of New York is getting to resemble a third world country. It rains for two hours and the city's mass transit arteries suffer the municipal equivalent of a stroke.

As I write this, CNN has posted a story saying that the whole subway system, including that on the East Side, is kaput for the moment.

"Due to severe flooding throughout the subway system, there are extensive delays on all subway lines," said a statement from the Metro Transit Authority (MTA). "Customers are advised when at all possible to use bus service." http://www.cnn.com/2007/US/08/08/nyc.weather/index.html

Bus service? You gotta be kidding!

I figured that it would be crazy to go down into the Number 6 subway line during this kind of mess. Unfortunately, I forgot that you should never put your trust in the Metropolitan Transit Authority. So this morning I hiked over to Fifth Avenue where there are bus lines that would get me fairly close to my office.

Lotsa luck! Where normally there are sometimes four or five people during rush hour waiting at the stop that serves me, there were now about 100 New Yorkers lined up for the next bus – more than could crowd onto a bus even if the bus arrived empty. A bus crawled right past them – already packed too full to take on more riders.

I started to walk. Bus stops further down the line were equally crammed with discouraged would-be riders. But I wasn’t the lone hiker. Platoons of grimly resigned people were trudging toward midtown. It was not a good day for a long walk. The temperature humidity index is supposed to make it feel like 105 degrees by noon today.

Meanwhile, Fifth Avenue was clogged – with buses, taxis, trucks, a few private cars, and lots and lots of limos and chauffeur-driven SUVs. Nothing was moving. Nada. Zip. The city has gridlock growing on its gridlock. The photograph above is just a bit of what I saw.

What effect would congestion pricing have? On a day like today, draw yourself a huge goose egg.

Desperate commuters from the outlying boroughs – and from the ‘burbs where there are also service “delays” today – desperate commuters can’t very easily walk the five, or ten, or twelve or 40 miles to the office. Even if it costs them two hours or more of extra commuting time in a gridlocked automobile, or an extra eight bucks, they’ll drive.

And on an “ordinary” day?

The guys in the limos won’t miss the eight bucks. The trucks have to get through, no matter what. The taxis will still be here. You may scare away a few automobile commuters, but you won’t achieve more than that.

To the extent that congestion pricing works at all, more hapless commuters than we have today will be driven into the dangerously crowded subways or aboard the jam-packed buses at rush hour. Which will simply make travel easier for limousine-riding billionaires like the mayor. They'll simply pay the eight bucks and laugh all the way to their power breakfasts.

Who wants a practical solution? Not the mayor.

The mayor might try to find way to help speed up construction of the under- construction- for-40-years Second Avenue Subway. Find funds to help the Metropolitan Transit Authority (admittedly not under his control) put more buses into service. Encourage cyclists instead of having his cops arrest them at every opportunity.

The city’s controller has already suggested something like this – a way to help out but still keep subway riding affordable for the average working stiff.
http://www.ny1.com/ny1/NewsBeats/transit.jsp

But don't count on Mayor Bloomberg for anything like that. Shuffling money around, even for a good cause, won’t get him the kind of notice he wants when he’s running for President. As reported at various times on this blog, the Mayor is definitely out to run as a third party candidate, which will make him the most arrogant spoiler in U.S. politics since Ralph Nader.

Oh yes, as if to confirm the matter once again, the New York Daily News caught the off-guard mayor talking about his presidential ambitions.
http://www.nydailynews.com/news/2007/08/08/2007-08-08_juror_mike_was_dc_dreamin-1.html

Hey Bubblehead, how many times do I have to tell you not to shoot your mouth off among strangers on elevators?
Posted by The New York Crank at 11:55 AM

The mayor always passes the buck. He can't be president. The past few weeks have shown what a terrible mayor he is. Totally subservient to Con Edison. Indifferent to today's mass transit chaos.