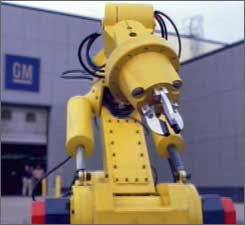 I don’t know where to start this story. Well, okay, let’s start it in New York, where the Deutsch advertising agency created a particularly engaging TV commercial.

It was a spot for General Motors about a klutzy robot who gets “fired” from the GM assembly line for dropping screws.

Alas, by the time this rant ends, the list of screwy screw-droppers you're going to read about grows to include a pathological passel of headshrinkers, a bunch of cowardly GM executives, some drunk under a busted park bench in Paris, and a flock of foaming-at-the-mouth right-wing blogaholics stretched out from Paris, to England, to North Carolina.

But let's start with the spot. It was a charming and funny one. A pathetic schnook of a robot who can’t hold on to its screws ends up on a downward career spiral, working next as a real estate sign holder and later as a tollgate lifter before it finally jumps off a bridge in despair.

"OH MY GAWD! A SUICIDAL ROBOT!
HE'LL ENCOURAGE PEOPLE TO JUMP
OFF BRIDGES, TOO!"

Boom! There was a wildly hysterical response from the American Foundation for Suicide Prevention, the American Psychiatric Association, and the National Alliance on Mental Illness.

Their reasoning? “Media portrayals, such as this ad, further trivialize the underlying illnesses that can lead to suicide and perpetuate this stigma.” (URLS below)

Aw c’mon! You guys are really just trying to perpetuate the stereotype of the "nutty headshrinker," right?

It’s an effin’ pretend ROBOT, for goodness sakes. It’s a FANTASY, guys! It’s a cute way of General Motors saying that it’s trying to make mechanically perfect cars. Nearly everybody either understands that people are not robots, or belongs in the nuthouse with the headshrinkers who man the wheelhouses there.

Or maybe I’m wrong. Maybe robots have HMOs that allow them 12 visits to a headshrinker every year, and they been snagging holes in psychiatric couches with their sharp metallic feet while pouring out their woes of 24 hour days on the assembly line, with virtually no downtime to re-oil their gears. No wonder those poor hunks of tin are jumping off bridges.

ATTENTION ALL PASSING BOATS
BEWARE OF ROBOTS JUMPING OFF BRIDGES!

Now, I can hear the loud harrumphing, “But you unfeeling Cranks don’t understand. Suicide is serious business. Somebody might be inspired by this poor robot to jump off a bridge, too.”

Yeah, right. But then, so might the word suicide. Or mention of it in any context. Why stop at coming down like a ton of bricks on General Motors? Why not ban any mention of the word suicide, or portrayal in words or pictures of the act of suicide by any creature, real or imaginary, living or mechanical? Just send out the cops to confiscate the TV spots and films that mention suicide and burn the books. If need be, burn the robots, too.

Every suicide in America raises the issue of poor mental health care in the United States. Herewith, a cranky recommendation that the Suicide Establishment focus on sick people, not fantasy robots.

Your own press releases state that there are over a million suicide attempts a year in the U.S. This says to me that so far, you’re doing a lousy job. At least have the common sense to stick to your own knitting, instead of trying to censor a TV spot that might give a few depressed people a laugh and momentarily at least lift them from their own depressed moods. Right now, it seems that the Suicide Establishment is terrified of the simple truth: That laughter is at least occasionally the best medicine.

No matter. GM executives, who have about as much spine as a jellyfish, caved in. They got the spot revised to save the poor robot from suicide. And you thought panicky shrinks were powerless over huge corporations?

IF YOU THINK THAT'S NUTTY, CHECK OUT
MY FAVORITE RIGHT WING EXPATRIATES

All of the above brings me to the right wing blog No-Pasaran (There's a link in the section above, right) which recently published this photograph of some drunk lying on the sidewalk at Place Jules Joffrin in the considerably less-than-spiffy 18th Arrondissment of Paris, famous for its flea markets. 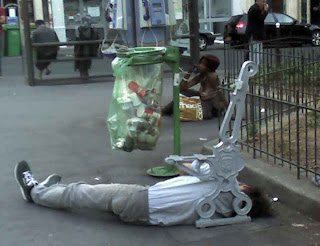 The photograph appeared as part of an attack on a French politician, Dominique de Villepin who had the temerity to say, according to No-Pasaran’s own translation, that France is not “a beat nation.” (The actual words were, “un pays fatigué.”)

The post with the unconscious drunk sat there, uncommented upon, for several hours last Sunday, until I posted on their feedback section, called “et ca geule,” the comment that there were plenty of homeless people in the United States, too, as well as working families who are homeless and sleeping in cars.

Well whaddya know? That simple and factual statement (type “Homeless Americans sleeping in cars,” into a Google search engine and you’ll get over 1,200,000 hits) disturbed the Sunday peace of the expat lunatic right like an éclat of thunder in the Clignancourt flea market.

Last time I bothered to count, there were 18 enraged responses, some of them wildly (and therefore amusingly) vituperative, like men in top hats throwing cow pies at each other. More interesting still, they censored my three-or-four sentence post on the grounds that I screen comments on my own blog, and therefore – if you can follow their twisted logic – I am not entitled to post on their public forum. So they blipped out my post and left only the responses to it. (Click on the No-Pasaran link above right and then scroll down to the same picture of the same drunk you see above.)

Truth is, I do screen – but only for spelled out obscenities and libel – and those guys know it. In fact, the only post I’ve ever rejected had to do with a a personal medical malpractice accusation that somebody wanted me to post, months ago. Since he was smart enough to include his e-mail, I sent him back a note explaining my policy. End of story

The real reason the No-Pasaran crowd posts responses to a statement they will permit nobody to read (unless this article prompts them to put it back) is that they’re talking to themselves and they don't like truthful static getting in the way of what they want to hear. Like little kids running around with their fingers in their ears so they can’t hear unpleasant news, they’re out to censor any news, information or opinion that doesn’t square with their own rather curious view of the world.

Meanwhile, their rebutalls are often mutually contradictory. I encourage you to visit the enemy camp and enjoy the chaos – a favor they don’t return.

All this right wing expat blather is a sign of the same self-reinforcing form of deafness that has the White House talking to itself and telling itself it's a sign we're winning every time another disgusted ally in Iraq pulls out, another American gets killed, or another American citizen confronts them with the unpleasant truth.

They of course support freedom of speech. But only for themselves.


URLs YOU MAY WANT TO CHECK OUT:

Now that we know how many "Homeless Americans sleeping in cars" hits there are via Google, can you supply a link to the number of "Fully-employed Americans who sleep in their cars" claim which you made on NP?

Not the number of hits on Google, research on how many people there actually are in the US in this regard.

Odd that some of the most enlightened in the perfect of Europe have higher rates than the hillbilly of the US. Surely BUSH! has cooked the books.

This data of course relates to individuals taking their own physical lives. The collective economic suicide of Europe, well that is another topic...

Hey, Gene, I am not your employee. Do your own damn research.

That was a bit of a non-sequitur, Gene, but I'm happy to print it anyway. You keep 'em coming, bubba!

This just in via e-mail from reader Geff King, aka Unidentified Bass Player:

Crank - I think GM could have avoided most of the controversy if they'd just offered the damn robot a buyout.