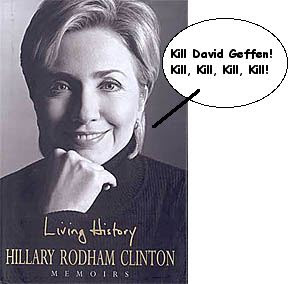 Listen gang, I hate – absolutely hate – to come down on any Democrat who’s a Presidential candidate.

Let it also be said that even Hillary Clinton would be better in the White House than any Republican I can think of, most especially better than Terrible Tempered Rudy or Fibbing John McCain.

That said, it seems apparent that Hillary just shot herself in the foot – well, maybe also in the arm and the nose and the earlobe and the kneecap – in a flap over Hollywood mogul David Geffen’s fund raising efforts for Barack Obama.

It all started when, in addition to abandoning the Clinton camp to raise funds for Obama, Geffen told New York Times columnist Maureen Dowd in an interview that Hillary is a polarizing figure who’d have trouble getting elected. He pointed to her stubborn refusal to admit she was wrong about Iraq: “It’s not a very big thing to say, ‘I made a mistake’ on the war, and typical of Hillary Clinton that she can’t.”

And then he added that while “everybody in politics lies,” the Clintons “do it with such ease, it’s troubling.”

Had she been a smarter and less polarizing candidate, Hillary might simply have told her campaign people to ignore the remark and, if asked by the press, say that "Mr. Geffen is entitled to his opinions, with which we disagree." She would have looked like a big, bring-us-together kind of person.

Instead, foul temper conquored all. Clinton campaign headquarters turned on the high voltage revenge machine. They came out with a demand that Obama denounce Geffen’s statement and give him back the money he’d raised for them.

Fat chance, and Hillary knew it. She’d never do any such thing herself. And then, as if to prove Geffen’s point about lying, the Clinton team lied and said Geffen was Obama’s finance chairman. That job is held by a woman named Penny Pritzker.

So let me see here: A private citizen switches his alliance from Hillary to Barack. Hillary’s enraged people immediately revv up for bloodlust, making an impossible and angry demand, followed by a lie.

Obama, of course, is firing back out of self-defense, though not nearly as viciously.

But you don’t even have to read between the lines to see that Hillary is every bit as polarizing and fork-tongued as Geffen said.

Speculative call: If Hillary brings down Obama, she’ll bring herself down as well, leaving the field open to John Edwards. Which wouldn’t be all bad, much as I like Obama.

For more entertaining dirt on Hillary’s explosion check out these:
http://www.slate.com/id/2159182/
http://www.capitolhillblue.com/wp/2007/02/22/2179
http://www.huffingtonpost.com/arianna-huffington/team-hillary-shoots-back-_b_41763.html