Announcing the first-ever New York Crank Psychic Ding Award®. And the winner is…. 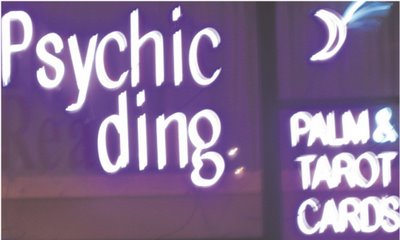 Faithful readers of this blog (all eleven of you) may remember that back in November, The New York Crank predicted the election outcome with help from a spelling-challenged fortuneteller who does business on the gritty commercial block where the The New York Crank offices also are also located. (Scroll down to the bottom of this post for the URL of her election predictions.)

Alas, Mme. Galzoragist has fallen upon hard times. What happened is, part of her neon sign blew out. This has messed up her brand image badly and she's too broke to hire an image consultant to fix it. People looking for psychic readings have become confused and no longer come to see her. So now she is selling psychic “dings.”

“They’re like little dents or chips or scratches on the mind of the person who gets them,” Madame Galzoragist explained. “They are transmitted psychically, directly from my mind to the mind of the ding-ee. Give me some money and you can test it out.

“How much do you charge?”

“Whatever the traffic will bear.”

So I gave her some money and thought of a person.

“You mean the anti-sin fundamentalist minister who got caught using dope and carrying on with the gay hooker, and who is now in rehab?” Mme. Galzoragist asked.

“Okay.” She put her right index forefinger to her forehead, closed her eyes and began to tremble. After a while she said, “Ding!” And then she said, “Done.”

“Up to now Haggard was merely a closet gay and speed-head who got caught. I have just dinged him into total insanity,” the Seer of West 36th Street explained.

“Aw come on!” I said. But sure enough, the very next day, Haggard went completely nuts, putting out word that he wasn’t gay, and that anyway he was “cured” of gayness, and was now “completely heterosexual” and that it all had miraculously happened in just a few weeks. http://en.wikipedia.org/wiki/Ted_Haggard

I mean, Hallelujah! Is that crazy or what? The only thing crazier than that story is any lunatic who believes it.

So Ted, you are now psychically dinged. Congratulations on being the first New York Crank Psychic Ding Award® winner in history.

With this as a precedent, we hope to issue many more psychic dings in the months ahead. Are you listening, presidential candidates and press agents?


For more on the inventor of the ding and her spelling problems just go to this URL and scroll down to the picture of the painted fortune telling sign and the article headlined
$5 Fortune Teller Predicts Election Outcome”L
http://thenewyorkcrank.blogspot.com/2006_11_01_thenewyorkcrank_archive.html