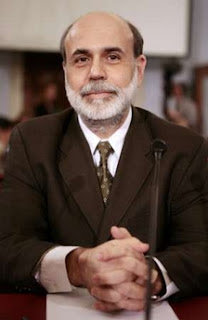 "'Crucially, whatever size of government is chosen, tax rates must ultimately be set at a level sufficient to achieve an appropriate balance of spending and revenues in the long run,' Bernanke said.

"Bernanke said advocates of lower taxes would have to accept lower spending on entitlement programs. Likewise, proponents of more-expansive government programs must recognize the need for higher taxes brought about by higher spending, he added."

Perhaps this genius ought to explain Economics for Dummies to the dummy who appointed him.

Uh, what exactly is your complaint? I can think of a third possibility. That is: we can run the printing press and stiff our creditors by corrupting the money supply. Was that the one you had in mind?

I have no argument with kindergarten economics, save that it has an eerie resemblance to a dream in which a college professor stood before the class and said, "You should always remember that B comes after A. And that C comes after B."

In short, my own complaint was, what's Bernake's point? Why is he lecturing the public? He ought to be lecture George Bush, who seems to be the only one in Washington who doesn't get it.

He was lecturing because it is natural mode of behviour. He taught basic econ at Princeton and co authored a coupla very good textbooks. Can't break the habit.

Have just been reading Danl Shaviro from NYU LS who does a grad school version of the same stuff. He says: you could raise revenues, or cut benefits. Or you could degrade the money supply. Or you could get lucky and get puffed up on a rising market. The last one worked for Britain after the Napoleonic Wars, US after WW II. Did not work for Louis XVI who had to call an Etats General and lost his head.

Or, as Shaviro points out, you could muddle your way through to a multiple solution: a little raise taxes a little cut benefits, a little luck in the market, a little degrading of the money supply. Which is more or less what carried us through from 82 to 97.

Shaviro also tells about the post Civil War experience. I knew that the Federal budget was in surplus every year for about 35. What I did not know is: evidently the revenue came from tariffs. But Congress didn't want to cut tariffs because it wanted "to protect infant industries" (heh). So it had to think up stuff to spend the money on. Perhaps it accounts for a lot of over-engineered federal courthouses: a lot of them are still in service, though they have been bucked down to the bankruptcy judges, while the "real:" judges sit in newer, spiffier and perhaps inferior buildings.

Judging by the number of elected members of Congress who believe in government's ability to provide all needs to all people (the 'free' lunch/'free' healthcare/'free' everything, crowd) it was probably an appropriate venue for the Fed Chairman to deliver an Econ 101 message.

I'm not aware of those. There ARE a few Congressman who believe you can cut taxes and use the shortfall to pay for war. And of course, their President clearly believes that. Perhaps it's George who needs to go back to school and re-take Econ 101.

What 'shortfall' are you speaking of?

Well, we have the highest dollar amounts rolling into the US Treasury so the problem does not seem to be the supply of funds. Perhaps we should take a look at what is being spent and addressing the 'shortfall' by cutting spending.

Real cuts not fake 'cuts' in the growth of spending.

Okay, I'm for real cuts Let's start with the Iraq War. According to the Wall Street Journal online of March 8, 2006, we were spending $5.9 billion a month in Iraq. That was 18% above funding for the prior 12 months.

(Remember, during the Clinton peace we had a cash surplus.)

Furthermore, war costs were rising then, so the situation is worse today. But even if we were still spending at the '06 level, we could save $70.8 billion a year by pulling out.

The Great Squanderer has tossed America's life savings into that bottomless pit for nothing, nothing, nothing except his own weird fantasies and some oedipul grudge against his old man.

And where do we save money? On the sufferiing of American troops who lost arms, legs, eyes and more in the war. (See the article above this one.)

Pull us out of Iraq, stop giving lavish charity to the likes of Halliburton, and we're a long way toward stopping the hemmorhage of American tax dollars -- not to mention American lives.

I know I'm a cranky guy, Gene, but in my view, your constant blinders-on nitpicking is really beginning to make you appear like one of the duller knives in the drawer.

Get your facts straight (at least the major ones).