Modest proposals concerning statues, the weather, Tom Friedman, and Wyoming — plus an honorable mention for the Texas power grid 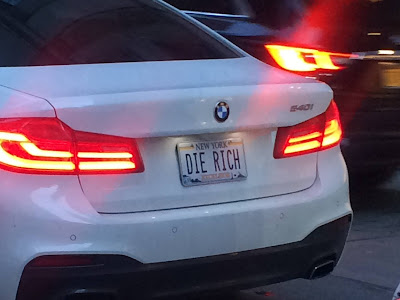 License plate recently seen in New York City. On a Beamer, of course. It has nothing to do with anything else here. Just sayin'.

A modestly proposed solution to the statue problem: You know the statue problem. Although I’m not aware of any statue census, I’m willing to bet that half the statuary (museums excluded) in the United States are either of Confederate generals or people who in some way were racist. And the list keeps expanding. And every time you tear a statue down, there’s a roar of bleating and protest.

So I have a thought. Instead of tearing down Confederate statues, erect statues of Satan next to each of them. Hey, you have your statues, Satanists have their statues, everybody’s got a hero to worship, and we can all go home.

What’s that? People are going to get tired of looking at all the Satan statues next to all the Robert E. Lee statues? Tell you what. Here and there, put up a statue of Priapus instead.

The Crank’s Theory of Planetary Instability. It's freezing and snowing in Texas, where with the juice turned off (more about that further on) it’s colder than in parts of Alaska.

How can that be?

I’m not willing to say the magic words “climate change” and leave it at that. I have a theory that if near the Arctic Circle summer temperatures now can reach a scorching 99 degrees, while Texas feels and looks like Alaska, something else is going on. Nope, not a secret plot. An unintended consequence of….

Wait a damn second! Don’t turn your back and snicker! Listen up! Just suppose that all those repeated underground explosions knocked the earth off its axis. Remember, it’s not just a little bang here and a little bang there. It’s a bunch of big booming bangs, week after week, year after year, place after place down below.

So the shaken earth rotates in some crazy manner and the next thing you know, Texas is at a latitude where Alaska used to be, and Alaska’s where the Equator used to be. I don’t know about you, but some people may be buying beachfront property in Nome.

Why oh why Wyoming?  When is the world (or at least The New York Times) going to do something about Tom Friedman of The New York Times? From as far back as I can remember reading him, he’s been saying things that, while not obnoxious, and not fearsomely objectionable, are just the slightest bit off-kilter.

Examples? Quite a few years ago, before a certain Israeli Prime Minister fell into a pit of corruption, Friedman was more or less regularly addressing his columns to “Bibi.” As if Benjamin Netanyahu woke up every morning and looked for Friedman’s column in the Times before he even went to pee. Some time after that, Friedman wrote a book called “The World Is Flat,” (which meant, I think, that people communicate faster these days — which Friedman evidently thoughtwas a huge discovery) and he seemed to use the phrase in every last damn self-promotional column until I wanted to vomit.

“The fact that one of our two national parties would stick with a leader who dispatched a mob to ransack the Capitol in hopes of overturning our last election is an acute national problem — a cancer, in fact. And like any cancer, the required treatment is going to be painful for the patient,” he writes.

Oh yeah, Mister Know-It-All? Well, I happen to have a form of cancer called Leukemia, and the treatment thus far consists of painlessly swallowing two pills a day. I’m not saying that many cancer patients aren’t in pain. I’m just saying that once again, you’ve made a pompous universal declaration that is four-tenths bonafide baloney. Nor would your proposals to “cure” this cancer be particularly “painful” to me. In fact, I’d be delighted by your proposed act that would get rid of the Senate filibuster, grant the District of Columbia and Puerto Rico statehood, and “forbids voter suppression.”

While I find all three prospect pleasurable, not painful, I confess it’s a neat trick if you can do it. But about Wyoming….

Friedman correctly states that D.C. and Puerto Rico each have more U.S. citizens than Wyoming. Sheesh! So does Brooklyn.  So does Queens. Should they each be their own state?

I have a better idea. Eliminate Wyoming’s statehood. Now there’s a proposal that’ll cause some real pain. Give part of Wyoming to Colorado, part to Montana, and part to Idaho. That’ll bring the population of those states closer into line with those of California and New York, which also only have two Senators each. Or rewrite the U.S. Constitution. I imagine that would cause some pain, too.

And speaking of Texas…Well, I did mention Texas a bit earlier when I was talking about Wobbly Fracked Earth Climate Change. But also, Texas is the state that refused to have anything to do with the other two major power systems in the United States because Free Enterprise. As for tight Texas government regulation of the utilities…what? You mean socialism?

So you had a bunch of utility companies that didn’t do what it takes to protect the Texas power supply from nature because, hell, nature’s probably some kind of socialism, too. And now most Texans are freezing their butts off, while others are paying dearly to stay warm.

According to the Washington Post, “the temporary train wreck of that [Texas electrical] market Monday and Tuesday has seen the wholesale price of electricity in Houston go from $22 a megawatt-hour to about $9,000.”

Now I’m going to do some back-of-the-envelope figuring here. That about a 409 times increase in prices, wholesale. Let’s assume retail follows suit. So if you typically pay, say, sixty bucks a month to keep your lights, and your heat, and your electric refrigerator, and your phone recharger on in Texas, you’re now going to have to pay over $24,500. Now there’s an electric bill that’s as BIG as Texas!

The good news is, that a heck of a lot of Texans will probably pay a lot less than that because they don’t have any electricity to pay for.

And while they are at it they should merge North Dakota and South Dakota. They need only 2 senators for slightly over 1.5 million.

I like that, Bill. But what to call the merged Dakotas? NorthSouth Dakota? SouthNorth Dakota? The United States of Dakota? Duodakota?

I'm reminded of a 1950s British film called "The Day The Earth Caught Fire." It's knocked out of orbit by simultaneous nuclear tests at the poles. At first the Brits love the unexpectedly warm weather and then they decide they'd rather have water and streets that aren't melting. Look it up.