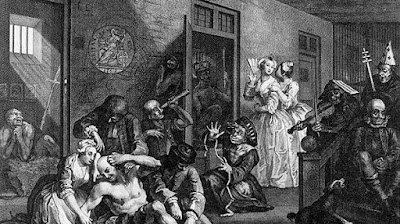 An 18th Century English madhouse. Or is it
the 21st Century White House? (Thank you,
Mr. Hogarth.)
It’s easy to get an inflated ego and nutty ideas about your own prescience. I’m not talking about Donald Trump. I’m talking about me.
In my last blog post, put up two days prior to the first presidential debate, I wrote:
“Unfortunately, Trump has a habit of shouting loudly while other people are talking, so that nobody will hear them.”
As a cure for this I suggested,
"The debate moderator should have two kill switches in front of him, each attached to one of the debaters’ microphones. The debaters should be told how much time is allotted to each answer they give, or to rebuttal they make. They should also get a 30-second warning signal. The second their time is up, the announcer should hit their microphone kill switches. No ifs, ands, or buts. That way, the debates could really be debates and not shouting matches."
So, when milliseconds out of the gate Trump began interrupting not only Biden but also poor Chris Wallace, the moderator during the first debate, I nearly broke my own arm patting myself on the back to congratulate myself on my foresight. I felt even more self-congratulatory when several commentators belatedly made the same suggestion I made about kill switches.
Cattle prods, viruses, Zoom, and pundits
With all of the foregoing in mind, I had planned to make this post about alternate ways of controlling Trump during the next debate, such as duct-taping a radio-controlled cattle prod to some private part of his, and switching it on every time Trump intruded into Biden’s or the moderator’s speaking time. Of course, Biden would have to be similarly wired up, although I doubt he would do anything that would warrant a  4,000-volt shot of pain.
Then, in a flash, Donald Trump tested positive for Covid-19 and everything changed.
If there is a next Presidential debate, it might occur during a presidential quarantine, and therefore might best be conducted via Zoom. This would automatically hand the moderator a kill switch, enabling some semblance of a real debate to take place. It’s an ill virus that blows no television audience some good. When people can’t or won't solve a problem, trust Mother Nature to step in. Wildfires, anybody?
Meanwhile, when a crazy virus strikes a crazy president, all of us begin thinking crazy thoughts. Here come some of mine. I should warn you that they may not be mine exclusively. Insane ideas, like insane viruses, replicate themselves in legions of human beings. All the same, I offer some whacko scenarios for you. Let’s see, in time, which of them turn out to be not-so-whacko after all:
Six thoughts that may be
as nutty or nuttier than your own
1. He doesn’t really have Covid-19. He realizes his last debate was a disaster, and this gives him an out to avoid a repeat disaster. He’ll be "too sick to debate" until several days after the final debate was scheduled. Then, miraculously, he’ll feel better, begin holding rallies, and start challenging election results as they come in.
2.  He does really have Covid-19 and he’s very sick, far sicker than anybody is letting on. Cabinet and other Republican strategists are convening as you read this, trying to decide how best to keep covering up the news, while Mike Pence bones up on presidential matters in the back room.
3.  There are also discussions underway in the White House to decide whether, if Mike Pence becomes sick, too, the blame can somehow be placed on Nancy Pelosi, who is next in line for the presidency after Pence.
4.  Whether Trump has Covid-19 or not, Republican Party strategists, after consultation with pollsters, have determined that Trump can’t win and are now huddling with Bill Barr to see if there are legal grounds to postpone the election because one candidate is too ill to participate. They have also checked with Amy Coney Barrett to see whether she will go along with a ruling that the election must be postponed, if her appointment to the U.S. Supreme Court is hurried along to get her seated prior to Election Day.
5.  Postponement of the election, of course, will be followed by cancellation of the election “until such time as there is no further risk that Covid-19 can again intrude on the election process.” A day after this announcement is made, the corpses of every pharmaceutical and bio research company executive and scientist involved in developing a vaccine will be found floating in the Potomac. The official pronouncement will be “Mass suicide.”
6.  As I've pretty much already said, it’s an ill virus that blows nobody any good. In the Kremlin, the corpse of Vladimir Putin is found, bent in half, a ghastly grin rigor mortising on his face. An autopsy reveals numerous internal hemorrhages, a torn intestine, and other signs that he busted a gut and died laughing.
Posted by The New York Crank at 3:07 PM

With this administration (and trump), any one of those seems plausible.

Butbutbut....
You left out the other fork on the road: What happens if he "recovers"?
#1 Define recovered.
#2 Covid recoverees show all kinds of deficits (including neurological). How will a WH that rotates around him like some Ptomelaic cosmology actually "function"? Define various values of "function"
#3 Things will be even more unhinged
#4 Undoubtedly:
- DJT will proclaim how tough he is, how ohnly he could have thus fought the virus and won
- He will proclaim that the virus isn't so bad, everyone should just catch it and be done with it, establishing herd immunity
- He will further discourage mask wearing and other prophylactic measures
- Having caught it, recovered and being now immune, will pursue even riskier behaviors and put even more people directly at risk.