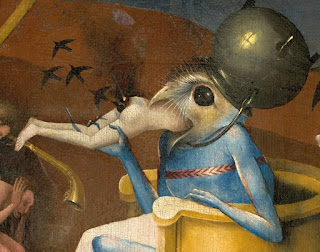 Another hapless American, fed to the Trump
Monster. Thanks for the nightmare, Hieronymous!

I have to hand it to the Toddler in Chief. He’s no ordinary failure. He's  a bottomless well of failure. He’s a black hole who keeps sucking everything into himself until there’s nothing left outside. He's a failure that won't stop failing.

He  reminds me of the first Terminator movie.

So I simply can’t today. This Presidential Super-Spreader, this Typhoid Mary of COVID-19, this pathetic lump of arrogant failure, this vulgar economy-killer, this job-destroyer, this unity wrecker, this assassin of American prestige, this NATO-crasher, this comity crusher, this health insurance killer, this potential Medicare and Social Security assassin,  this self-centered, inhumane, indecent representation of a real man, this shambolic mockery of a leader, standing there on a White House Balcony, all alone, saluting nothing in particular, striking poses like a fool while trying to look important...all this is is only part of the terrible malediction he has inflicted on the United States.

We, too, are now pretty much all alone in the world. Just like Trump on a balcony.

We, too, are seen, as a nation, as standing for nothing at all any more. Just like Trump on a balcony.

We, too, are an insane ruin. Just like...but you know by now.

Take whatever breaks you need. You are not the Dumbass Whisperer.

Incredibly well written. It's been a pathetic ride. Filled with disgust that this has happened and uncertain about how the election will go....thanks for describing so perfectly the monster in the White House - in the USA.

the Energizer Bunny of chaos, and failure, and misery

That is a pitch-perfect description!