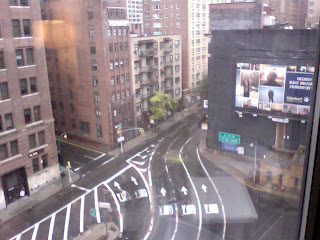 Above: The view from my window, mid-afternoon. No people. No traffic. No wind. No driving rain. No nothing except for a little bit of drizzle. Mayor Bloomberg and Governor Cuomo effectively turned the city into a ghost town.

New York - Well, the subway stopped running at 7 pm last night. It’s now 2:42 pm the next day and so far nothing much has happened.

Okay, okay, it’s drizzling a little here in Manhattan. There’s still hardly any wind. And that's about it.

On the TV screen I’m seeing meteorologists in rain slickers standing in plastic boots and nylon rain parkas, somewhere in some Godforsaken spot that Chris Christie panders for votes in. Call it Eggvelt, New Jersey. The broadcast jouros are talking about a wave – you shoulda seen it –  that went over the boardwalk a while ago. Maybe if they just stand there blathering long enough, another might come by in real time.

But here in New York?

Listen, I’m not saying a hurricane isn’t coming. The weather radar says it is, and with considerable force. And I’m not saying people living in flood zones – well anyway, most flood zones ­– shouldn’t pack a bag and head for the hills. All I’m saying is, the politicos, aided and abetted by journos with dreams dancing in their heads about broadcasting while holding a lamp post and fluttering sideways like a wind whipped flag, have spread unnecessary panic. They told everybody, way too soon, to head for the spare bedroom at the uphill neighbors (who must be thrilled) or get out of town. Way, way too soon. Call it premature evacuation.

The hurricane may be a big one when it hits. But it ain’t gonna hit until tonight or sometime tomorrow in the wee hours. By that time every theater, restaurant, pizzeria, nail salon, hamburger joint and specialty shop (businesses like those are even open on Sundays in New York), not to mention the subway, bus and suburban rail systems, will have already lost a full 24 hour cycle’s worth of income, or more, for nothing. Nada. Zilch. Plus a day's worth of Wall Street productivity today.

There’s no reason why businesses couldn’t have been open a half or three-quarters day today, with the subways shutting down after 5 pm. But once the subways are closed, as they did yesterday evening, everything closes. So now one of the key enablers of the local economy has put the entire economy out of business.

(As I write this, I've just received a call from Con Edison, the local utility, telling me to "turn off all major appliances" so that "if" they cut off the juice, they won't fry my refrigerator when the power comes back on. If it goes off.)

Irony of ironies, even people living downtown in Battery Park City high rises, a score to several hundred feet above where the waves could possibly rise, are getting told to pack up and leave. Nice trick if they can do it, with public transport and now some of the city’s automotive tunnels closed in anticipation. But hey, you know, if the basements of their skyscraper homes flood, they might have to walk down the stairs. Or use flashlights when they brush their teeth.

The one kind of business that seems to be doing well in Manhattan is the supermarket business. Last night, out for a stroll, I stepped into my neighborhood D'Agostino to pick up a quart of milk and a box of strawberries, since I was out of both. Big, big mistake. Each of the five checkout lines there was about fifty people long. The shelves were nearly empty. (Make an exception for the milk fridge. Milk didn’t seem to interest anybody.) The clerks, since they couldn’t get home any more, were talking about sleeping on the floor in the basement. (Most basements in Manhattan are a lot more waterproof than either the subways or, evidently, Con Edison's power lines.)

New Yorkers had been told to stock up on water and canned goods, and that was what the fools were trying to do. Except that, save for a dented can kumquats here, and a tin of tomato paste there, the canned goods were  sold out by 4 pm yesterday. So people were buying anything that can survive outside of a refrigerator. Cheese doodles. Beef jerkey. Twinkies. Super Sugar High Cereal. All the stuff that gives Mayor Bloomberg the vapors, save that he’s the one who indirectlh caused the run on this junk food in the first place.

Let’s assume that we really do have a bad, street-flooding, tunnel-deluging, electric wire-frying storm tonight, about the time that Jay Lenno starts making jokes about it in Burbank. At that point, the city will have already been through about 29 hours of near lockdown. Let’s assume that the city then goes through 24 hours of real hurricane conditions, followed by cleanup. With any luck the city (and perhaps the nation’s financial system, since Wall Street is currently shut down, too) will have suffered nearly an economy-wrecking week. Millions of people will have been inconvenienced two days more than necessary. Local citizenry will have unnecessarily lost about $2 billion on this.

Why all this concern from our politicians? I’d like to think they worry about my life and health, but it’s a bit hard to believe that when they close the means of egress, lock up the subways, send the busses back to the garage, and then tell people in dry, sky-high apartments to leave town or die. I think what they’re really trying to do is make sure that if there is a disaster, nobody’s going to blame them for it. The last thing Michael Bloomberg wants to hear is, “You’re doing a helluva job, Bloomie.” Cuomo, who’s is cultivating presidential ambitions, also wants to emerge from this blame free.

So screw all if it costs the city’s citizens and business a billion, or a couple of billion, or ten billion (roughly half as much money as Bloomberg personally owns) to get through a day or two of  real crisis with manufactured pre- and post-crisis days that double or triple the losses.

If Cumo and Bloomberg (and Governor Fatso in new Jersey) really wanted to make themselves useful, they’d find a way to pump out the subways and car tunnels as water gurgles in, so that transportation can’t be flooded back to the 12th Century. And they'll figure out how to keep the buried power lines dry.

But that’s never going to happen, kiddo. So sit back and munch a Twinky or three. And wash it down with that $5 water, instead of the free stuff that’s coming out of your tap. When it’s over, Bloomberg will be back to hectoring you for being too obese. (Notice, he never makes the same criticism of Chris Christie.)

And that’s the way the hurricane hovers, here in drizzly New York.

6:25 pm update: Well, at long last, we're having a hurricane out there. The wind is whistling past my windows. Whistling! And sheets of water are coming out of the sky. Twenty-three hours after Cuomo and Bloomberg closed down New York, the weather is finally cooperating with them.
Posted by The New York Crank at 3:09 PM