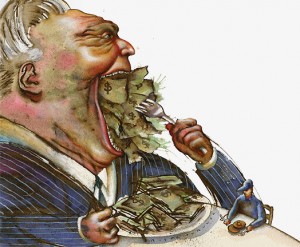 Once upon a time, most (not all) CEOs of public companies were pretty fairly paid. Yes, they made about 24 times what their workers made. But hey, they were the CEOs.

But weird stuff started happening. By 2011 the average CEO was making 243 times what the average worker was making. And today it’s even worse – if the worker is working at all.

And remember, we’re only talking “average” CEOs. Forbes.com just ran an exposé of what some of the CEOs in communications get paid, which, if nothing else, might help explain why you’re paying through the nose for cable TV.

CEOs and their paid apologists

So-called executive compensation consultants claim that outrageous incomes are necessary to “incentivize” the CEOs to make more money for their companies. Of course, at many if not most publicly traded companies, the CEO is the Chairman of the Board of Directors. And that board is the one that hires the compensation consultant — who then decides that the boss who helped hire him needs a raise.

So in other words, the CEO is hiring his own paid apologist at the expense of stockholders and consumers.

More and more of the resulting scandals are beginning to poke their ugly heads up from under rocks. The nature of these scandals? Executive pay and the value executives create (or don’t create) for their stockholders are completely out of whack.

Consider these figures from that recent Forbes article:

• Last year, Disney’s Robert Iger (total annual compensation $34,000,000) got a 12 percent increase in pay while the value of his stockholders’ shares went down one percent.

• Janet Robinson of the New York Times got paid $24,000,000 (including termination pay) an increase of 433 percent, her “reward” for shriveling the value of her company’s stock by 22 percent.

• Similarly, Tom Glocer of  Thomson Reuters got a 109% pay increase for work that helped to screw shareholders out of 30 percent of the value of their stock. And on and on.

Executive pay soars out of control

The truth of the matter is, the compensation consultants don’t get called back if they don’t keep on recommending to boards of directors that the company up the ante on executive pay. It’s a never-ending upward spiral. The more outrageous it gets, the even more outrageous it will get next year.

Listen, I have no complaint with executives getting well-paid. But I draw the line at “too well paid” and so should you.

For you capitalists: The more top execs get paid, the less there is to distribute to you and your fellow stockholders.

For you non-executive corporate employees: The more top execs get paid, the less money there is to see that your salary even keeps up with the cost of living. And the more incentive there is to outsource your job to Mumbai or someplace else where some third world wage slave can do it cheaper.

For you consumers: Prices go up to drive up profits to the maximum, so that the CEO and his top management buddies can reap the maximum bonus their puppet boards of directors have offered them this year, and so that the ante can be raised next year.

For anyone who votes: The reason so many corporations have lobbyists who thwart the overwhelming sentiments of the American people is because the same lobbyists have been seeing to it that senior executives get taxed at a relatively low rate compared to your own (see the Buffet Rule). Obviously, if we had tax rates that ran, say, to 70 percent, as they once did, the money senior executives steal from a corporation’s other constituencies would go right back into the public till, instead of into their fourth and fifth homes, yachts, and securities investments.

So here’s what you can do:

1. Take the trouble to read and vote the proxies you get if you’re an individual stock owner. Once a year, corporations are required to ask stockholders to vote on a variety of matters.

2. When voting on a proposal from dissident shareholders that the Chairman of the Board should not be an executive of the company, vote yes on this one.

3.  When voting on a guidelines proposal for executive salaries, vote no,  even if the company claims the executive salary guidelines suposedly align management’s interests with those of the stockholders. They may “align” but the sheer amount of bucks executives get for increasing profits comes at least morally close to grand theft of company assets. Just keep voting no, no, no on all compensation proposals generated by the company and the board until the boards realize they’re paying too much for executive help. Period.

4.  From time to time a dissident stockholder will demand that the company disclose to its stockholders any expenditures for lobbying or political influence, and any corporate campaign contributions. Vote yes on proposals like this. (Note that inevitably the board will recommend against voting yes. Of course. They want to keep the corruptocracy safe from prying eyes.)

5. If you belong to any organization that invests large sums of money in the stock market such as a union that has a big pension fund, or a state pension fund,  make it clear you want the fund managers to vote the same ways that are recommended above.

Will any of these actions change things? Not in the short run. But as the pressure builds over the years, and with fewer and fewer shareholders are willing to go along with corporate boards, the boards and the execs they supposedly control will get the idea.

And then maybe — just maybe — we can begin to sweep out and disinfect the corporate corruption that is poisoning America.

P.S. Here’s a sixth thing you can do. Start sending your friends links to this post and to blog posts like it. Help spread the word. And write your Congressman and Senators, letting them know where you stand on these matters.
Posted by The New York Crank at 3:40 PM