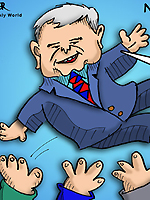 "Every person in here knows personal pain. Every person in here has had someone close to them go through painful things. To take an ex-wife and make it two days before the primary, a significant question in a presidential campaign, is as close to despicable as anything I can imagine."

That was Newt the other night, responding to one of his two ex-wives' just-announced allegations that he wanted an open marriage so he could carry on his affair with the woman who is his present wife.

I'd give more credence to his tantrum if he hadn't pursued Bill Clinton's impeachment over the Monica Lewinsky affair. Yes, I agree there's a technical difference. Clinton lied under oath, in a trumped-up hearing engineered to bring maximum attention to his dalliance with Lewinsky. Newt, on the other hand, is only lying to the American public. But what does that tell us about how he'll perform as president?

Gingrich also claims that the networks turned down offers for some of Newt's friends to go before the cameras and testify that he didn't ask for an open marriage.

How could they possibly know? Were they in the Gingrich bedroom when the conversation took place? And if so, does that mean that Newt was also having threesomes?

Yeah, I just got snarky. But Gingrich is a  a serial philanderer and, I suspect, a serial liar who wants to be the next President of the United States.

Note: Cartoon by Baldinger under a creative commons license. No endorsement of my cranky views by Baldinger is intended or implied.