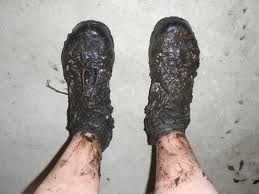 So, uh, according to all the news, George Romney won the Iowa straw poll by eight – count ‘em folks, eight! – votes.
Meanwhile, Rick Santorum and Ron Paul are yapping at his heels. Newt Gingrich is grumbling (justifiably) that Romney is a liar who, if you’ll pardon my own awful metaphor, is stabbing him in the back with clubs. Or clubbing him over the head with stilettos. Something like that. And Michelle Bachmann and Rick Perry seem about to crawl back into the murky caves from which they emerged and call it a day. Oh wait a second. After crawling into his gave to rethink his candidacy, Perry crawled out again, to lose again another day.
What’s it all mean?
It don’t mean a thing – and not only because all those candidates ain't got that swing.
To explain the mucky murk:
the old “Mushiness Index”
Back in the 1980s, there used to be a polling and market research company called Yankelovich, Skelly and White. It had since disappeared, although it first metastasized into two separate rival companies that are still doing business, one called Yankelovich; the other called DYG, which claimed to have the real Yankelovich as a co-founder. But I’m getting off track here.
A now-deceased woman at Yankelovich, Skelly and White named Florence Skelly invented something called the “Mushiness Index.” This purported to measure not the things or people that individuals like you and me are for, but how intensely we are (or aren’t) for them.
For example? Ask me if I prefer ice cream or chocolate cake and I’ll tell you ice cream. But my preference is really rather “mushy.” At any time I might change my mind, and go for the chocolate cake if I’m in the mood. Or next Wednesday, mindful of my diet, I might say to hell with both the ice cream and the cake and go for jello. Although I've picked a dessert at your request, my preference is anything but firm.
I have a deep, abiding suspicion, that every last candidate in the Iowa Republican Straw Polls, including the one who just shot her own candidacy in the head, has a following that is largely mushy to the point of being downright squishy. Sort of like stepping into eight inches of mud with shoes that only go two inches up your ankles.
Yes, the voters went for Romney over Santorum by something like a mushy 1.0008 to 1 – on Tuesday of this week, at any rate. Next week things might go just the opposite way. Or, as we’ve seen, the votes might instead go to Ron Paul, or Newt Gingrich, or Rick Perry if he doesn't change his mind about running again, or John Huntsman or, for that matter, the man in the moon. Or the troll under the bridge.
Are Democrats "mushy" too?
All this would be good news for the Democrats, if not for the fact that I suspect we Democrats, at least some of us, are furiously mushy ourselves.
President Obama made the mistake of playing diplomat to a bunch of Republican barbarians, preferring “consensus,” or some damn thing like it, to victory. As a result, Republicans walked all over his face. Obama compromised away the public option, leaving forced purchase of commercial health insurance as the key means of covering Americans for health expenses, rather than chancingf “Medicare for all.” Or at least for all who wanted it. The Republicans loved – trust me, loved – the opportunity that this compromise gave them to generate political hysteria. Obama next compromised away environmental safeguards when he opened the gulf to offshore drilling – just in time for the BP disaster.
It goes on. Budget compromises. Limiting how much he really should have demanded to kick start the economy. Laying Social Security and Medicare on the table for negotiations that never happened anyway. And other gross insults to the base who once supported the president.
As we’ve seen, the one time Obama stood firm – on the two month payroll tax-relief and unemployment insurance extension for the middle class – the Republicans folded as quickly as you'd fold a poker hand containing a pair of jokers.
Unfortunately, Mr. Obama learned too late. That’s assuming he learned anything
These days I’m getting bombarded by increasingly desperate-sounding e-mails threatening “deadlines” to cough up three bucks for Obama. Sorry pal, I ain’t coughing. Not even a paltry three bucks. And neither are thousands of other once-devoted Democrats, judging from the frantic tone of the e-mails.
Yes, there is a moral
The moral is, don’t betray your own base, or they’ll give you as much support as a lump of jello will give a highway bridge.
Does that mean I want any Republican to win? Nope. But neither do I want to go out of my way to support Obama any more, after he betrayed my Democratic ideals and some of the policies he ran on.
So call me mushy, but as far as I’m concerned, Mr. Obama, you’re on your own.  Speaking of which, I’ll have the Boston cream pie. Nope, come to think of it, maybe the banana fudge ice cream. Well, if you don’t have any more banana fudge, do you have any rice pudding? No?
Well then, is Hillary still around?
Posted by The New York Crank at 4:29 PM

Wow! I couldn't have said it better. Thank You. Every one I know who voted for Obama has told me they will not vote for him again. I keep wondering if I was on acid during his campaign, because that was a hell of hallucination, just sayin'