Is it time for the Democrats to put up an anti-Obama primary candidate? 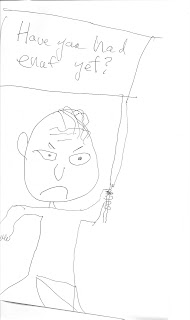 It’s time to come right out and say it. Barack Obama hasn’t merely disappointed his base. He has betrayed us.

He has put Social Security and Medicare on the table – to him nothing more than chips than he can exchange for some vague Republican promises to fiddle around with tax revenues.

This will “cause some political pain…” I heard him say on TV this morning. Political pain?

How about real human pain? The pain of hunger among many seniors and disabled kids, just for openers. Not to mention the pain felt by all of us over 65, who cheerfully accepted Social Security and Medicare deductions from our page checks for decade after decade – because we knew the money were putting in would tide us over and take care of us when we were ill in our old age.

And now we're being cheated out of delivery of a promise and a lifetime of contributions. The Republicans are raiding Social Security as if it were an abandoned bag full of money. And Obama says, well okay, my own supporters don’t want you to do this, and you do want to do this, so we’ll compromise. You can do it.

He “compromised” this way at least once before, when he bargained away his once staunchly defended “public option”

I don’t know what Obama thinks he’s doing. I don’t even know if he thinks. Some deep personal flaw leads him to turn on the people who put him in office — perhaps assuming that come the next Presidential election, Democrats will have no one to vote for save Obama anyway. If that's his thinking, he is a terribly flawed president indeed.

It’s time for us to turn on him. We need a prominent and thoroughly gutsy United States Senator, former senator or a civil servant with experience on the highest level to prepare pronto to run against Barack Obama in the presidential primaries.

In my heart of hearts I know that Russ Feingold or Barney Frank or Bernie Sanders couldn’t carry a national election, even though if we had one of them in the White House, we'd have a great president. Which leads me to one simple question:

Hillary, where are you when we need you?