Las Vegas: What happens here stays here, including Steve Wynn’s wrecked Picasso painting. But is it art? And what’s it really worth? 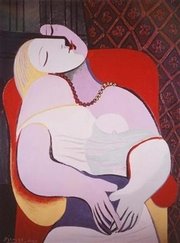 My favorite advertising slogan – at least for today – is the one promoting Las Vegas tourism.

It says, “What happens here stays here.” It’s permission from a state government to sin your head off. Or your pants. Or your wallet.

Wanna cheat on your wife by getting nekkid with a free hooker supplied by a grateful pit boss to thank you for leaving 50 grand of the family's money at a craps table? Not to worry. It’s “our little secret.”

On the other hand, some folks (me for instance) love the slogan because it’s so upfront about what Las Vegas always has been and probably will continue to be. Personally, I hate the place. It’s all plastic – manufactured excitement and glitz, designed to lull you into parting with your money. But at least the advertising’s honest these days.

Some years ago, a dumb attempt to sell Las Vegas as a place for “family vacations” crapped out in the marketplace. This was proof that you can’t fool all of the people all of the time, or even josh them a little by telling them that an openly sinful city is a great place to take the little kiddies. Not that I have anything against sin. It's the commercializing of it that gets my goat.

Las Vegas for family vacations? Come to think of it, it wasn't a little fib. It was a big lie. But I’m beginning to stray a bit too far from the points I really want to make. So let’s get on to the topic of the day.

WHAT'S THAT PICASSO WORTH?

Just recently, Casino mogul Steve Wynn auctioned off the Picasso painting you see reproduced above for $137 million. And then – accidentally – he poked his elbow through it, substantially diminishing its value. He immediately cancelled the deal. http://news.yahoo.com/s/nm/20061018/od_nm/picasso1_dc

Nevertheless, the story raises some questions. Why was the Picasso worth $137 million and not $13.7 million, or just 13 cents? Why is the jpeg reproduction of it at the top of this page worth nothing at all, even though you can see almost exactly what Steve Wynn saw before he trashed this great piece of art and object of desire? And finally:

WHAT THE HELL IS
ART, ANYWAY?

Let’s start with what art started out to be. Originally, it was simply a way to show us what something looked like. Pre-historic cave men drew animals on their cave walls. It's easy to imagine them saying to each other, “Yeah man! That looks exactly like the beast I’m gonna put an arrow through tomorrow morning. We’re eating meat tomorrow night, baby. Meat, meat, meat!” You can almost see a bunch of happy Neanderthals dancing around their cave painting, laughing and high-fiving one another.

A bit later on, art began serving religious functions, but it still had to do with showing us what things – or people – looked like. Walk through any antiquity museum or ancient ruin. Here’s a portrait of Dionysus, the booze god. Here’s Zeus, ruler of the sky. Here’s Persephone, goddess queen of the underworld. Yadda yadda yadda. Oh, and by the way, here are my human pals: Plato, and Emperor Nero, and Queen Nephertite. That’s what they looked like.

Still later, in medieval and into Renaissance times, church paintings told stories to illiterates who couldn’t read the Bible. “Here’s Moses coming down from the mountain. Notice he has stone tablets with 10 commandments in his hand. See the 10 lines? Count them on your fingers.” “Here’s the Last Supper. See all the disciples?” “Here’s St. Sebastian, suffering his terrible martyrdom. See the arrow in his abdomen? Betcha that hurts! See the look of agony on his face?”

So in essence, art was a comic book without all those hard-to-read things called words.

YOU CAN TAKE A HIKE ALONG A
GIANT COMIC BOOK. WHOOPS!
SORRY, IT'S ACTUALLY A PRICELESS TAPESTRY.

In Bayeux France there’s a 230-feet long tapestry telling the story of the Norman invasion. It’s a big deal, about a thousand years old, that has a museum all to itself. There are hundreds of separate drawings embroidered on a piece of cloth. You see medieval war ships. You see guys wading ashore. You see knights in armor getting zapped.

What it boils down to is, it's giant war comic, not terribly well-drawn. The only things missing are frames drawn around each panel. Art was always intended to be displayed like the Sunday funnies. In this case, it was a funnypaper you have to take a 230-foot hike along, while getting elbowed and jostled by other museum-goers who want to stand in front of the panel where you’re standing.

HANG IN THERE
WHILE WE LEAP AHEAD

Hey, I know I’m about to take some giant and clumsy leaps through art history. Bear with me. I’m not going through the whole damn history of painting here. I’m trying to make a point. So to continue...

In the 19th Century and into the early 20th Century, artists like Pissaro and Seurat began to show off. “Hey, I can make a whole lot of little dots and if you stand close to my painting they’re just little dots, but if you stand back, you still have a comic book frame. Look, now that you’ve stood back you can see your girlfriend sitting on the grass.”

Picasso took things even a step further. “Look, I can take your eye and put it here, and take your head and shove it there, and stick your shoulder and your neck someplace they don’t quite belong, and you can still recognize yourself. Is that cool, or what?”

Well, maybe. But things ran downhill pretty quickly after that. By mid-20th Century we had Jackson Pollack throwing paint at canvas, in a “that’s-how-I-feel-man” frenzy that apes in zoos have replicated with their own feces, and Piet Mondrian was drawing lines and boxes and then coloring them in, the same as you could do with a ruler and a paintbrush.

I once asked a woman who told me that for a living, “I make art” what all those pictures-of-nothing that hang on museum walls and sell for millions are supposed to be telling us. She got huffy. “They don’t have to tell you anything,” she said, as if a painting is a form of lazy entitlement. “They just move you.”

Move me? So does a taxicab.

“Also art is something that gets you thinking and talking. Art creates buzz and excitement.”

Yeah yeah. So does an enraged bee at a garden party. Why isn't a live bumblebee art? And how come a fish tank containing a dead shark – pickled in formaldehyde by Damien Hirst – is considered to be exceptional art by some critics?

Why is a forgery of a Rembrandt worth not nearly as much as the original painting, even though you can barely tell them apart?

Why is a Picasso original worth $137 million without a hole in it, but a whole hell of a lot less with the hole? After all, the one with the hole got me buzzing – or at least writing. It has us – right now – pondering the purpose and value of art together.

So if the purpose of art is to create conversation and buzz, shouldn’t a Picasso with a hole in it actually be worth a whole lot more than if it were undamaged? After all, had Wynn merely sent the intact painting to his buyer instead of jamming his elbow into it, none of this conversation would be happening.

FINALLY: A DEFINITION OF ART
AND A WAY TO DETERMINE ITS VALUE

Where I come out is, “Art" is anything somebody says is art. And the rest of the world can take it or shove it. Cherish that definition. It will serve you well – as long as you keep it to yourself.

And the value of art? Here's an economics lesson for you:

Any piece of art on the planet is worth exactly the maximum sum that a buyer is willing to pay for it.

And not a penny more.

What is the value of art? I think it is beyond mere money. But I think more important than economic value is the meaning of art. Roger Scruton, who has written quite widely on the subject, said in the first essay of his I pulled up from Google that

"Consolation and beauty go hand in hand: that which consoles us appears lovely in our eyes, and if the object of love and the object of aesthetic judgement are both called beautiful this is no accident. To find beauty is to find a way out of the turmoil into the stillness - it is to arrive at a place where we are at home, a place of tombs and whispers and crystallized hopes."

His point is that consolation is the point of art. And though he is more likely than even I am to let his love of words run wild, I think I agree. So I'm in your camp, believing that there is nothing artistic about Jackson Pollock, except insofar as he reveals, in the meaningless waste of paint and canvas, what is truly in his soul: a meaningless waste of humanity and talent. (I should be quick to add, budding humanist that I am, that his humanity is not meaningless, just his waste of it)

My darling daughter, the art historian, and I were strolling thru the MOMA one day at lunch and I stop in front of a giant freakin' canvas by someone I never heard of. The thing was two wide horizontal stripes in different colors. The thing had to be 20 feet long by 10 feet high - two colors, two stripes.

So I ask my darling daughter why that painting, which was probably done with a roller from Walmart, why was it hanging in the MOMA and probably worth some bucks.

Her answer was that it had value because it was the first painting of its type done by an artist.

Now that was indeniably true, and also seemed a pretty poor reason to spend millions on a painting. But that's just me. I've been repeatedly told by my wife and daughter that I have no taste.

But I'm the one with the money, and I know what I like. And that's the bottom line.