Doubletalk! Goodbledygook! Pompous trash-talking and the thespian sisterhood. It can drive you crazy, crazy, crazy! 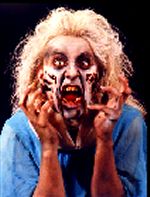 Listen up. The crime of misleading people with meaningless or misused language is nothing new. I wish I could track down the name of the early 20th Century candidate for US Senate who slimed an opponent by defaming the guy’s sister, an actress. “My opponent’s sister…” the candidate told his shocked and horrified audience of rubes, “is a known thespian!”

Academia has been picking up on this technique over the past few decades. Since academic audiences can’t be bowled over by throwing a single ten dollar word at them, the self-appointed seers of academia do it by tying sentences and lines of reasoning in knots that’ll cross your eyes and snap your ganglia if you try to parse them.

DECONSTRUCTIONIST GOBBLEDYGOOK
AND OTHER IMPENETRABLE WRITING

A school of something-or-other called “Deconstructionism” has been taking the lead in this fine art of wowing people by tossing out just-about meaningless stuff – stuff that might sound profound if you’re the academic equivalent of a con man’s mark. For example, Here’s Jacques Derrida, the father of Deconstructionism, describing what it is he does:

Well come to think of it, nevermind. The real question facing us is not how many sheep it takes for Derrida and his pack of academic charlatans to pull the wool over our eyes. It’s why is this disease spreading?

WHERE ARE FILTHY
(BUT UNDERSTANDABLE) LIMMERICKS
NOW THAT WE NEED THEM?

Poetry, for example, started out as a form of communication. But academia has infested the ranks of so-called “poets” with poseurs who couldn’t communicate their way out of a paper bag. For some reason, the following brain-buster appeared on a blog devoted to poetry. (Http://ursprache.blogspot.com)

“The phenomenological power of both metaphor and thisness derives from an awareness of an extreme tension between being and time. Thisness is the lyric comprehension of this tension; an instant of time opens to embrace the resonance of all that is; time is present, but suspended--held in balance. Metaphor, by contrast, is a form of domestic understanding: wholeness overrides morality, but does not erase it. The distinction of things remains the foundation of their resonant connexion. In metaphor, gestalts glitter: those inflected by being and time, flashing back and forth over the hinge of what is common. –Jan Zwicky, Wisdom and Metaphor, #67”

Thanks, Zwicky. And thanks, Ursprache. I’ll return to you guys whenever I’m in the mood to have my mental chain jerked.

All this stuff boils down to bad writing. Sad to say, bad writing has even infested businesses that get paid to write well.

Suck on this excerpt from a want ad recently placed in a magazine called ADWEEK by Digitas. (You should know that Digitas is the meaningless name of an advertising agency):

“…searching for an Account Supervisor to spearhead the strategy and development for direct mail or interactive initiatives to meet the marketing and business objectives of a specific client.”

A less pompous-assed ad agency would say they want “a junior executive to head up direct mail and internet projects that will help one of our clients make his sales numbers.” But that clear and truthful description would sound a hell of a lot less impressive and make clients wonder why the agency is soaking them with formidable fees.

You can help cure the problem for those Digitas junk mail guys. Call them by the name they deserve: “Digit-Ass.”

AN AD EVEN A CARPENTER
SHOULD BE ASHAMED TO WRITE

It’s getting so bad that even the lumber business is talking like a full Professor of Contemporary Eschatology on a magic mushroom trip. Take this choice morsel from a want ad placed by Woodworker’s Supply in Alberquerque, NM:

In other words, they’re looking for a “company man” who knows how to sell to consumers and other businesses using the Internet, catalogues, and showrooms and who also can crunch some numbers.

If this is kind of language the company uses all the time, no wonder the poor bastard who gets the job will need a couple of degrees.

I'll say to you what I said to AdScam, though I usually like to be on the side of the "Eschew Obfuscation" crowd:

Hey, isn't this complaining about vague, flowery language in HR ads a little bit like complaining about the coded language in the real-estate columns? The stuff in there isn't English, it's HR-speak, with dozens of veiled references that anyone who has read "Up the Agency" will surely recognize and interpret correctly, down to the probable figure permitted for business lunches.

You're critiquing a sub-genre of communication that should be graded by Orwell's rules, not Strunk and White's. Because of course we all need more Orwellian obfuscation in our lives.

Of course, as a technologist at the above-mentioned agency, we can be a bit more frank with *our* hires: "Come learn big-chair marketing operations! Build stuff that millions will come, see, and hammer on! Become a fireproof, steely-eyed veteran of a thousand huge launches, and forge a resume that will cause lesser developers to cower!"

Naturally, that gets translated on our jobs posting board to "must possess initiative, good communication skills, and commendable personal hygeiene", but cf. note about HR-speak above.

PS. I've just finished Thorstein Veblen's "Theory of the Leisure Class", and of course Veblen has plenty to say about education as aggrandizement. Though he does it using ten-dollar words, and he was sleeping with every other professor's wife in sight. Where has this guy BEEN all my life?

Attaboy, John! It's pretty hard to hit a moving target, and this post is whizzing all around the point at light speed. (I mean that in the liquid sense of the word "whiz.")

At any rate I've decided to publish your remarks despite all my misgivings about (and usual prohibitions against) speaking in tongues.

I mean, that's why they call me a whimpy liberal. If I told you to take your post and stick it up your post office box, that wouldn't be very liberal of me. Now would it?

LOL...I worked for that agancy when they were Bronner Slosberg Humphrey and were run by two of the best ad people ever..Mike Bronner and Mike slosberg..then they went public and became Digitas and those two left and it went downhill...They bought that name from an MIT student who had come up with the name for something...
Silly name...sillier agency now