Trump hacked! Pizza Guy smacked! Big bank rats out wreckers and rioters! So who says there’s nothing but bad news these days? 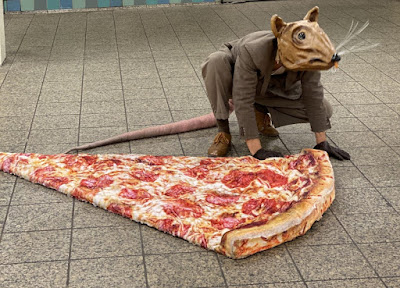 What do you get when you combine a story about an irate Pizza CEO with one about a bank ratting out its customers?

I’m writing this on Thursday, March 4th. This is the day Q-Anoners believe that He is risen — “He” being Donald Trump, of course.

Today, they say, He will somehow transmogrify from a bitter presidential has-been in Margo Fargo or Wherever-the-hell-it's-called in Florida, to a bitter political has-been who will be miraculously transported to Washington D.C. and reinstalled as President of the United States while Joe Biden walks the plank.

I suspect this is scheduled for very late in the day, and might even get, umm, temporarily postponed. Since we will likely have a rather long wait for the sacred moment, during which your stomach may begin to rumble, here are a few tidbits to nibble on in the interim.

It happened to Gab. That’s a social media platform where right-wing loonies are finding a haven, now that they’ve been effectively rousted from Twitter and Facebook. A massive 70 gigabites of data — 70 gigs! — including user data, private posts, secret messages, profiles, passwords, the whole ball of wax got, umm, copied from Gab’s inner innards and handed over to something called Distribute Denial of Secrets, the heir-apparent to WikiLeaks.

I found this news at an online publication called Coindesk which usually concerns itself with techno-financial news about Bitcoin and Ethereum and other “digital currencies.” But I guess this story was too good for reporter Jamie Crawley to pass up. Including this tidbit:

You wouldn’t want to be offended by Torba’s language, which concerns what appears to me to be an unflattering reference to transsexuals, so out of tender concern for your sensibilities, I won’t give you this link.

(he sez) by marauding Mad man

Before I lay this one out, allow me to express my personal ire at the way people are naming advertising agencies these days. Back when I drifted from newspaper city rooms (as news rooms were then called) to ad agencies, it was pretty easy to know who was running the candy store. Ogilvy was run by a guy named David Ogilvy. Burnett was run by a guy named Leo Burnett. Batten Barton Durstine and Osborne was…well, you get the idea.

But now? Evidently the more opaquely smartass an ad agency name is, the better. There is, or was, one called Razorfish. And no, there’s no Mr. or Ms. Razorfish. In London there’s Mad Dogs and Englishman. And now there’s an ad agency somewhere in the U.S.A. called Laundry Service. (Get it, get it, nudge nudge? I don’t.)

Anyway, Laundry Service is or was the ad agency for the Papa John’s Pizza chain. The founder of Papa John’s was a dude named John Schnatter, who had a possibly racist meltdown (ya think?) over NFL players taking a knee during the National Anthem.

The Chicago Tribune reported back in 2017 that Schnater blamed puny pizza sales on the kneeling NFL players. (Papa John’s was a major advertiser of NFL games). The protests “should have been nipped in the bud a year and a half ago,” the Trib had Schnatter ranting.

Next thing you know, Schnatter gets booted (or “resigns” take your pick) from the company he founded. Now he’s suing Laundry Service, claiming, in essence that they plotted against him. In a complaint that is either completely ridiculous, or living proof that truth is stranger than paranoia, Schnatter alleges that Laundry Service employees came up with some kind of malicious plan for Schnatter “to have an hourlong live interview with a hostile media personality and prompt Mr. Schnatter to make damaging statements which need ‘to be viral.’”

This comes from Ad Age (sometimes the best news is in industry trade journals.) Ad Age reports in part:

“Laundry Service immediately began to discuss how Mr. Schnatter’s statements on the call could be used against him to damage his image so ‘he gets fucking sent out to pasture on this shit’ (in Stein’s words),” the complaint reads.

“The chilling details from this taped conversation make clear the intent of Laundry Service to destroy my reputation, as well as the Papa John’s brand, harming our employees and franchisees in the process,” Schnatter said in the statement.

Because, of course, that’s exactly what advertising agencies clients hire them to do.There’s more, and I think the Ad Age pay wall will let you past once or twice, if you are intelligent enough to peruse the rest of this tale.

Got feds combing through your dirty underwear? Thank the bank.

Back to Coindesk again, which ran an article about Bank of America with a “trigger warning” that, “This column has something nice to say about Tucker Carlson.”

Seems that the motherTucker broke a story saying that since the January 6th insurrection on Capitol Hill, the Bank of America has been “helping federal investigators search for extremists by combing through its transaction records.”

So, Insurrection Dude, if you were in Washington D.C. on January 5th and 6th and whipped out your B of A credit card, paid for a hotel or Air BnB reservation, “bought weapons anything else” (including T-shirts) from a “weapons-related merchant” between January 7th and January 20th, or made “airline-related purchases” after January 6th not only to Washington but to anywhere from Omaha to Thailand….you are so screwed!

For details on how you can’t even get away with a little bitty thing like smashing down the Capitol doors and trying to lynch your congressman, see the Coindesk article here.

Isn't "Papa John" the slug that whined about the Affordable Care Act saying he'd have to ad a gazillion dollars to each pizza and cut wages because of Obamacare? Once a slug, always a slug.