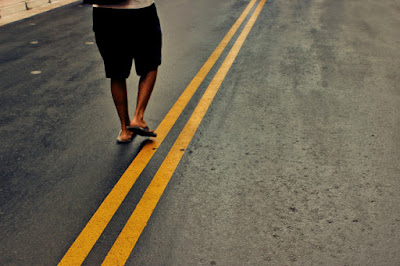 Please correctly pronounce what this Frenchman has on his feet. They are “fleep-flopes!” Long O on “flops”, s’il vous plait.

Let me right off the bat acknowledge that the situation in Oakland, CA, was anything but funny. A dance party had been held in what was evidently a firetrap of a warehouses. Thirty-six people lost their lives in an ensuing fire. Derek Almena, the impresario — if you can call him that — who’d arranged the party was brought up on trial. There was a plea deal. It appears he will be able to remain out of jail.

But that didn’t for an instant quell the rage of one grief-stricken parent who unloaded on Almena in court in a tirade that ought to go down as a classic in the history of furious courtroom maledictions. She barraged him with such world-class rage, hate, and a thirst for revenge that it ought to serve as a future model to anyone who chooses to level a curse on a malefactor. Reports the San José Mercury-News:

At one point during Monday’s sentencing hearing, the mother of Chelsea Faith Dolan, who died in the Dec. 2, 2016, fire, cursed Almena.

“May you Derick Almena take on the visions that I see each day and feel the pain of my nightmares,” Colleen Dolan said after initially struggling to speak. “My hope is that in giving these visions to you I may be free. I curse you with the intense burning heat and flames that scorch all the hair from your body and that peel the skin away from your face. I curse you with the choking smoke saturating your lungs until they bubble and blister and foam oozes from your mouth and nose. I curse you with the pain in the bones and muscles that comes from clenching in fear as you face the fury of a firestorm coming to consume you.”

Those seeking to curse their enemies would do well to study Ms. Dolan’s speech as an example of how detailed, graphic, and vengeful a proper curse can be. After that, any curse that consists of dropping a mere F-bomb will fade into insignificance.

This is a police matter!

We all know that the French care very much about how you pronounce their language. Now it turns out that they care equally about what’s on your feet when you exercise.

See, the French last year had been pretty much in lockdown due to the COVID-19 pandemic. But exceptions could be made. One of them was, you could leave the house to get in a bit of exercise, or “physical activity.” There were caveats of course. You had to be within a kilometer of your home. And you could only venture out for an hour. But hey, it’s a chance to raise your heartbeat a bit, send a bit of blood coursing through your veins, and feel a bit of sun on your face for a change.

So why not try to cure that cabin fever?

If your feet are not properly attired in athletic shoes you could be in big trouble with the cops, or les flics, as they’re sometimes called in France. (And it's pronounced, "lays fleeks.")

Enter a young guy named Laurick, who last year left his home for what he believed a was a perfectly legal reason — “physical activity.” Within a matter of minutes, les flics busted him and socked him with a fine of 135 Euros — very roughly $150. Since then, they’ve tacked on an addition thirty-one Euros in procedural costs. And his case may now go before a judge.

The problem? He was wearing flip-flops instead of proper sneakers. Quel horreur!

“The situation is so grotesque it’s funny,” fumed Laurick’s father, Alain. He is now in the process of trying to prove that “physical activity” can  be defined more broadly that the police interpretation of the law, which limits activity to “doing sports.”

Or perhaps walking around in flip flops is a sport. Stay tuned.

By the way, I don't mean to nitpick, but in French,the "s" in "les" is silent when the noun that follows begins with a consonant.

ZOINKS!!!
Now THAT'S a curse!
And I don't blame her one bit!

Don't seem all that long ago, we called them thongs.

There's a curse for you: may you be forced to work out with whities in thongs!