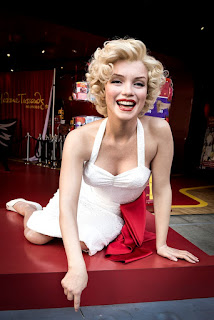 “Who do I have to blow to get out of this movie?” — Attributed to Marilyn Monroe on the set of The Misfits, her final film.

And so, the Raiders of the Lost Republic, who crashed into the Capitol Building a few weeks ago in search of legislators to kill, are getting arrested. Some of them.

The only President of the United States who regularly put on makeup each day before he stepped out of his living quarters has fled to Florida.

There's a sane, humane President with government experience in the White House at last.

So, all’s right with the world, right?

Don’t you believe it. Not for a second.

We woke up from the nightmare, but the nightmare is still there, behind us, close enough to be blowing in our ears and breathing down our necks. If we have any sense at all, our hearts are beating hard, our bedclothes are soaked with perspiration, and we’re likelier to be hyperventilating than celebrating.

True, by getting Trump out of the White House, while keeping him off most of the social media, America has thrown a rock at a snake, and temporarily pinned him under it. Celebrate that. But do not let down your guard.

He may wriggle out. Or somebody may lift the rock and free him. He may slither away, his skin a bit scraped, his odious excuse for a soul now more enraged than ever.

But even if we’ve actually managed to silence him and send him into eternal and silent Florida exile, there are more where he came from.

Ted Cruz, anybody? You’ll find him in the kitchen, probably, slathering oleaginous lubricant on his fangs and forked tongue. Care for some Josh Hawley? Or a few more years of Lauren Boebert, or Marjorie Taylor Green? Perhaps you’d enjoy House Republican leaders Steve Scalise and Kevin (“Weathervane”) McCarthy? And all the Republicans who signed on to an amicus brief to overthrow the results of the Presidential election? And Senators so squishy on their allegiance to the truth and the U.S. Constitution that they could squeeze through a keyhole, like Lindsey Graham?

Or how about the laid-back and conscienceless Mowcow Mitch McConnell, who likes to bend law and custom to suit his needs. One day he’s staunchly defending the filibuster so that Democrats can get little or nothing done for America’s suffering people. The next, he’s tossing Senate customs in the dumpster (as when he withheld and held up judicial nominations during the Obama Administration, most notably among many that of Merrick Garland, on grounds that he later revoked when the shoe was on the other foot.)

So no, it isn’t over. Greed is eternal. The obscene lust for power for the sake of power is eternal. Corruption is eternal. The swamp, one thing — perhaps the only thing — that Donald Trump tagged accurately, is eternal. And for the moment, or perhaps for all of our lifetimes, swamp creatures cluster and mate around the Republican party.

So be careful where, and for how long you sleep. The majority of Republicans will play Joe Biden’s comity card when it suits them. But they will reshuffle the deck and come at their fellow Americans fangs out when they care to, as well. And those fangs are venomous.

This is a movie you can’t easily get out of. Nor its second run. Nor its third, fourth, fifth or five-hundredth.

Excellent advice, Crank!
As usual, may I add.

It's Fascist wingnuts ALL the way down - and around.

The hope from DC and in boardrooms across the nation is that we will all go back into our usual brain dead servility mode.
Somehow, I don't think that's going to happen. We'll see.

IMHO, while there may be other thing more important in the short term the keystone that prevents extremism, all forms and flavors, is the elimination gerrymandering. As long as the elected get to choose the electors it will always be a matter of winning primaries with a willingness to be more extreme than your opponent being the biggest advantage.

Eliminate gerrymandering and candidates are forced to win by catering to a much more diverse electorate. One in which extremism is largely self defeating.

Hoping a split Repukkkikan party will take care of it's self. Crank On !