Signs of the times

I'm late with this, I know. But I need to say how delighted I was with the massive outpouring of outraged women in New York yesterday.

At about 5 p.m. on Park Avenue in the East 30s, women were streaming home from the demonstration site about a half mile to the north. Most of the ones I saw were twenty-somethings, enthusiastic, energized, and evidently raring for more.

There were so many of them that they jam packed the subway, not only at my stop- but at several further uptown and closer to the demonstration, causing delays and crowding that required the New York Transit Authority to take special measures. It was the first time I have ever been delighted about being delayed in the subway. 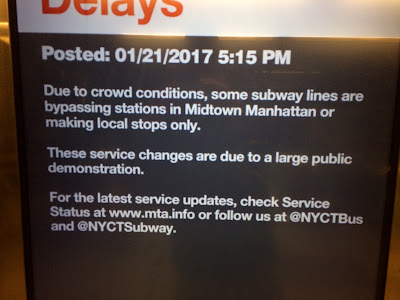 I boarded a downtown-bound train at East 33rd Street. Many of the young women were entering the subway at the same time. Some were evidently strangers brought together by the event. They were exchanging contact information, always a good sign. I suspect it means that they're not done yet. It means, perhaps, that they're barely getting started.

So I am not quite as wary as others that this will be another flash-in-the-pan demonstration with no followup. My feeling is, they're in it for the long term.

Watch for young people, particularly women, to start getting actively involved in politics. These will not be Hillary Clinton followers. Instead, they will be Democratic Party leaders in the not-too-distant-future. Yesterday was not a day of demonstrations. It was the birthing of a revolution that will drive out the reprobate old guard of both parties and bring us, in time, a more just society.

What I found especially heartening was the young demonstrators' sense of humor — terse combinations of irony and mockery, in the placards they waved. It's always a good sign when demonstrators are laughing. It means they sense their own superior power. And that they know they shall overcome.

A few signs were abandoned in various place after the massive demonstration. Let me share a couple: 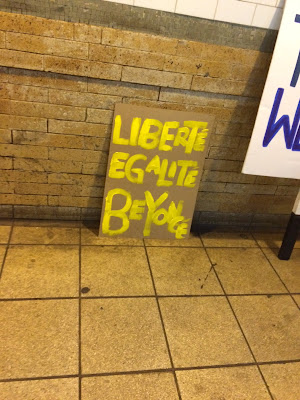 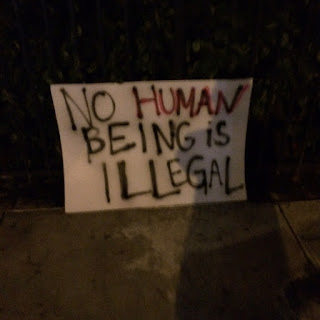 And this one via Connie Schwartz Harris: 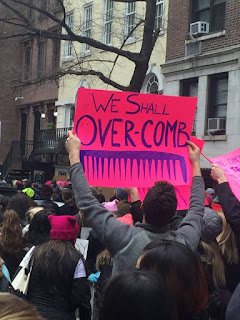 I think one of the best results of the women's march was how it obviously unnerved the Trump people. I loved seeing the video of Trump's press secretary go ballistic.