Republicans demonstrate that their party is nothing more than a comic book, while Melania Trump all but lip synchs Michelle Obama

I  must say, watching the first night of the Republican convention last night was almost as entertaining as my first exposure to comic books.

I tuned in too late for the floor fight to boot Trump off the ticket. News reports have the Republican-Trump Complex squashing their opponents like a bug, thwarting what could have been a grave embarrassment to the party and The Donald.

But I tuned in just as the comic book characters that represent the Republican Party came onscreen.

Among them  were Mr. Flag Wrapper — Willie Robertson, the long-bearded, hillbilly-ish, Duck Dynasty dude, who took an American flag and used it as a sweat rag to wrap around his head. Had a Democrat done this on TV, no doubt the Republican outrage machine would have been belching steam and giant clouds of volcanic ash. "How dare some lib-tard desecrate the flag?!?!?!"

But should a Republican even use the flag for toilet paper? Well heck, that’s showing he has a patriotic ass.

Then former Governor Oops of Texas, perfectly disguised as Clark Kent, got up and said something so forgettable that I can’t remember what it was. Sort of the way he forgot the three departments he'd eliminate if he remembered to become president.

Another huge highlight for me was Rudy The Air Chopper Giuliani, the so called “security expert.” Rudy's “accomplishments” included establishing a super-double-secret emergency command center for grave emergencies in the World Trade Center, shortly before 9-11 (but after terrorists had already tried to bomb the World Trade Center with a truck bomb in the garage of one of the towers.)

Shucks, what made Rudy think that just because they failed once to blow the place up, and because it was a symbol of what the terrorists decided they hated about America, that they would never back and try again?

Rudy last night looked as if he had lost whatever common sense and sanity he ever had. He turned into a cross between a super villain out of Batman, and a former New York TV appliance salesman named Crazy Eddie, ("His prices are in-sane" said Crazy Eddie's slogan.)

It was like a nuthouse ballet to watch Rudy wildly gesticulating, chopping at the air, with his hands, looking like somebody the cops would blow to smithereens if only he were black and someone whispered, “He probably has a gun, and as you can see, he’s a whack job.” 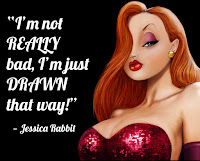 But I don’t believe Melania plagiarized Michelle. I believe it’s the fault of plagiarizing speechwriters, who put Michelle’s worlds in Melania’s mouth. I feel just a bit sorry for Melania.

I suspect that after his first very costly divorce from Ivanna, and a later divorce from Marla Maples, The Donald’s lawyers have engineered prenups so harsh that Melania would be all but living on the street if she ever divorced The Donald. So she's trapped, forced to forever mouth plagiarized words and defend a loose cannon of a husband.

She’s like that beautiful but not in control character in the movie, “Who Killed Ronald Rabbit?” I’m talking about the cartoon character Jessica Rabbit who spoke the immortal line, “I’m not really bad. I'm just drawn that way.”

And these are the people that roughly half the voters want to put in charge of America’s future?