Hi, I’m not stupid, but I play it that way on TV to attract Republican voters 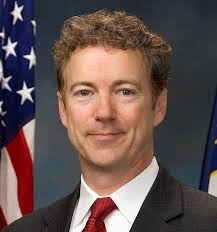 So now we have Rand Paul seeking the Republican nomination for President. His stated interest in disengaging the United States from armed conflict certainly has its appeal. As does his interest in ending NSA spying on Americans. If he means it.

Unfortunately he also comes with a truckload of ideas that just sound a little too dumb, or too naive, or too off-the-wall nutty to come from somebody who presumably had the smarts to get into and through medical school.

Some of the deep down insanity of the thinking he purports to believe in bubbled up from the snake pit recently. It happened in Rand Paul's put-down of an attempt by Senator Bernie Sanders to spend more to prevent  starving senior citizens from continuing to starve.

Take a few mind-boggling minutes to watch Paul's presumbly clueless back-and-forths with Senators Sanders and Franken, then resume reading below.

Sanders had spoken of the Federal “budget consequences” of letting seniors starve during a meeting of the Senate’s subcommittee on primary health on aging, which he chairs. It’s not hard to see what those consequences are. And Sanders pointed them out. Those starving seniors, deteriorate faster than the would if they were reasonably well-fed. Consequently they end up in emergency rooms and nursing homes at public expense, instead of remaining in their own homes.

That’s not a terribly difficult concept to grasp, but Rand Paul either can’t grasp it, or more likely pretends he can’t grasp it.

“It’s curious,” said Paul, “That only in Washington can you spend $2 billion and claim you’re saving money.”

Right. He can't seem to understand that a $2 billion cork can prevent a $50 billion hole in the dike that will drown half the country.

Well, let’s move the decimal point over a few places and apply this theory to you, Senator Paul. You practice ophthalmology. Do you have a Yttrium aluminium garnet laser to correct posterior capsular opacification? Well, that set you (or somebody) back roughly $140,000.

Do you have a Tonometer? That set you back about two grand. And those are among the hundreds of instruments and precise lenses and other doodads an ophthalmologist needs to practice. Think of all the money you could save, Dr. Paul, if you didn’t buy all that crap. You could just pry peoples’ eyelids open and remove their cataracts through mental telepathy. Or perform Lasik surgery by staring into their eyes. Or prescribe prescription lenses through intuition.

And that’s just as dumb (or insane) a concept as saving money by letting seniors starve.  Or in thinking, as you stated, that “the nobility of private charity” will somehow do the trick.

Meanwhile, Paul is out begging his supporters for the money they themselves have saved. He wants their money to help get him into office.

And oh what plans he has for when he's in the Oval Office. He's going to destroy the "Washington machine special interests," for example. He doesn't say which interests.

However, you can be pretty sure he's not talking about the special interests that keep eliminating taxes on the rich, who can well afford to pay a few extra bucks, while whacking the rest of us. Maybe there will be a starvation tax, for the privileges of going hungry.

And he's going to "stop the damage we've seen President Obama and his pals inflict on our country," his fund-raising letter tells me. What damage could that possibly be. Oh, I see –  the damage that's caused when you can't be denied medical insurance because you have a "prior condition." Or that makes sure you get medical insurance in the first place.

Ran Paul's letter to me also tells me he wants a "money bomb." What he's not revealing is that the only thing his program will actually bomb is the American economy.

Of course, you gotta know that Senator Paul already knows he’s talking nonsense most of the time. And that he’s merely saying what he says because he thinks you’re a rube.

But you're a rube only if you let him get away with it.