Man on the take pays off his greedy insurance company masters 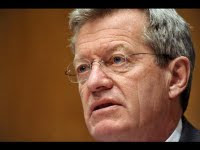 The public option is down and out.

Max Baucaus (that career political hack on the right) killed it, saying he didn't know how else to get 60 Senate votes for a healthcare "reform" bill that shovels truckloads of money to the health insurance companies at the expense of the American taxpayer while forcing most of us to use their greed-driven "coverage."

Yeah. If he stopped taking money from insurance companies, that would be one vote more for the public option. Ditto Senators Carper of Delaware, Conrard of North Dakota, Lincoln of Arkansas and Nelson of Florida. The reek of legalized corruption ought to stink in every American's nostrils.

Did I mention my own senator, Chuck Schumer, who voted against the public option this time, but says he'll introduce a public option amendment after "reform" without a public option is voted in? He knows perfectly well his amendment will be voted down. But it allows him to play both sides of the fence. The hypocrite!

Now, will President Obama have the guts to veto the bill, which makes a huge gift to the insurance companies at taxpayers' expense without solving the biggest part of the healthcare problem? Or will he crumple like an overused dollar bill?

You know perfectly well what the answer is.

Excuse me while I go vomit.