Dear Mr. President: Tell this scoundrel to give us the health care bill most of us voted for, or to get out of Washington 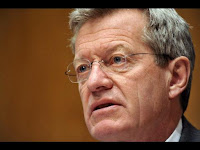 I voted for you when you were promoting a pretty specific plan that promised a “public option” to keep the health insurance companies honest. It wasn’t the healthcare plan I wanted. I was looking for a single payer plan. But I was willing to compromise.

What Senator Max Baucus is trying to foist on us isn’t a plan. It’s a blueprint for failure. It’ll make healthcare more expensive for many of us, pay for itself by taxing other health plans instead of high incomes, and generally make a mess of things. It's the kind of healthcare reform plan that an insurance or drug company would promote to make us hate the idea of a healthcare reform. Which may be why Baucus wrote it the way it's written.

Max Baucus, we know, is on the take from health insurance companies and drug companies.
He and the other “Blue Dog Democrats” (“Blue Vermin Democrats” would be more like it) don’t have the public's interest at heart. It’s time for you to reign them in. Or swat them down.

Mr. President, here are several
things you can do

1. Right off the bat, stop calling it the “public option."

“Public option” is Washington wonk jargon. Americans like Medicare, as evidenced by the screaming hordes who rail against so-called “socialized medicine” and then end their tantrums by screaming, “And don’t you touch my Medicare, either.”

Well, the public option is Medicare. So start calling it what it really is, “Reliable Medicare for any citizen who wants it.” That’ll go a long way toward shushing up the foaming-at-the-mouth morons in the crowd.

2. Reach out with that powerful presidential iron claw you have at your disposal, grab Max Baucus by the throat, and throttle him within an inch of his political life.

Lyndon Johnson was a master of this. You can do it, too. Haul Max’s butt into the Oval Office. Sit him down in a nice comfy chair, smile sweetly and say, “Baucus, starting in 90 seconds, you’re a dead man walking in this town.”

Mention that any bill that benefits something or somebody in his state will be vetoed, as long as you’re President, unless the appropriation for his state is stricken form the bill. Mention that you’re going to mention this to other Senate Democrats — and that you will make him a pariah whose mere presence is blocking their own pork from reaching their own states. Mention it to Senate Republicans, too.

While you’re at it, mention that you’re mighty suspicious of all that money he’s taking from the drug and insurance companies, and you’re thinking of asking the U.S. Attorney General to look into the possibility of influence peddling and bribery. Oh, and of course mention an up-and-coming young Montana Democrat who you might support in the next primary.

3. Then go on to the next Blue Vermin senator.

Keep on doing that until the Blue Vermin Democrats are trembling in their shoes about what might happen if they don't revamp the bill to what you were promising during your election campaign.

You tried it. The Republicans blew off your overtures.

It’s time now to deliver for the people who voted for you, before you blow it, Mr. President. Give us the health care bill you got elected on!

What gives here anyway? I grew up believing that the Democratic party was the "party of the people"! I was reminded of this again last weekend when I made a little pilgrimage to the FDR Library in Hyde Park, NY. President Roosevelt ushered regular people like you and I into the twentieth century. He brought electricity to the rural south! The middle class that we all now take for granted - which hadn't even existed prior to the New Deal - is now in serious danger of vanishing. Look around you. The signs - ominous and disturbing - are all there. The entire reason for the existence of the Loony Right Wing since 1964 has been to roll back the advantages gained by the New Deal and the civil rights movement. Do you think I'm being an alarmist? Fine. Just keep sending these Right Wing extremists and these Blue Dog Democrats to Washington and see what happens.

The Democrats are not going to distinguish their party by trying to sell themselves as Republican Lite. They're not going to turn America around by foolishly preserving the policies of the last thirty years. They need to educate their constituency by showing them the folly of their abhorrence of things "Left" and "Liberal". Three-quarters-of-a-century ago, American democracy was saved by a government that was decidedly left-of center in all but a few areas. It can happen again. But it's only going to happen if WEEDA PEEPOLE refuse to turn right at the next crossroad. It is only down the road.